I use the term ‘Junior’ fairly loosely here. Mainly I’m referring to folks who are young enough to be at the very start of their (hopefully long) career. I basically just grabbed the names of the skiers with some of the best FIS points results last season who are no older than ~23 (although that’s approximate). In some cases I removed a ‘young’ skier who was accomplished enough already that they didn’t seem to fit in with the others (e.g. Charlotte Kalla).

Here are 10 of the top male distance skiers:

You have the true phenom Petr Sedov, who is notable to me not just for his good results, but how uniformly good they have been. Only Belov displays a similar level of consistency, I think. Nearly everyone else has some very good results, but also a fair bit of variation over all. Calle Halfvarsson actually had a fair number of weaker races last season (but also plenty of good ones) although I think he may be more of a sprinter. Poltaranin is another guy who didn’t have quite as strong a season as the previous two. Two names that weren’t particularly on my radar screen are Dotzler and Tammjarv.

As for sprinting, I’m going to also use plain old FIS points, so obviously there are even more grains of salt to be had here: 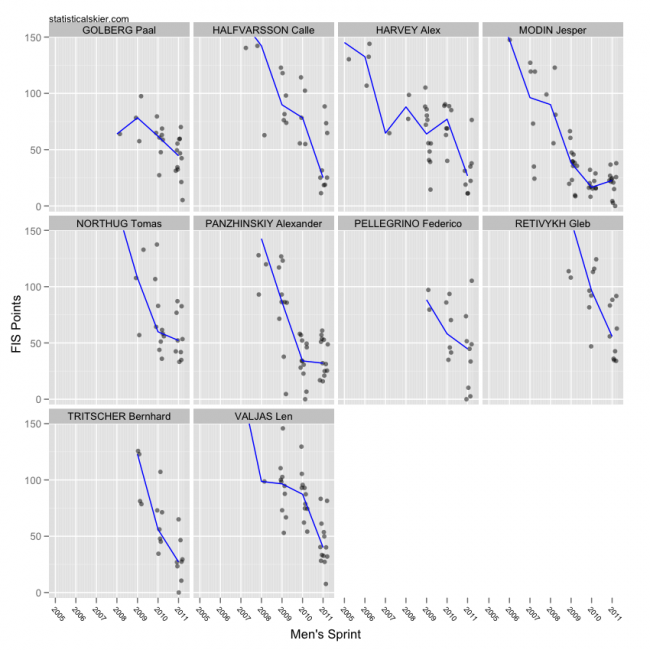 FIS points obviously understate Modin’s 2011 season quite a bit, I think. He’s definitely an established sprint contender at this point, despite his propensity for finishing 6th. Three guys with major jumps in qualification speed last season were Halfvarsson, Harvey and Valjas.