The past few mornings I have been waking up early enough that I might be rivaling past Middlebury College Coach, Terry Aldrich in his zeal for the dawn.  This pattern lends to a feeling of courting a day — certainly being ready for it — and being unmistakably ahead of your colleagues (or in my case, athletes) in exuberance by the time they wake up.  Bottom line — as the GMVS XC Ski Team is nearing the end of our first altitude camp of the 2011-12 — the Head Coach is fired up!

Today was a special day, not only because the kids got an excellent day of training on snow along side the Italian National Team, but because they got to link their passion to a bigger issue.  Today is a worldwide day of unity and awareness, drawn together under the name, Moving Planet — with the goal or reducing dependence on fossil fuels, looking to alternative energy sources and promoting a movement towards a world with 350 part per million of CO2.  We had a day we will never forget — one with snow, contemplation of our place in the world, and physical experiences (read, play) that link us to the planet in a respectful way.


Speaking of days I will never forget, on the eve of competing in World Junior Champs in 1999, in Saafelden, Austria — I witnessed the then fastest man alive, Peter Schlickenrieder duel with the fastest Austrian sprinter in a night sprint.  The town had shut a street and lined it with snow — for a single ski race that lasted no more than a few minutes.  Sprinting as an event did not really exist yet, this was an exhibition to help launch the Junior World Champs, and I was blown away by this man V1’ing in a yellow suit at what-seemed-to-be the speed of light.

Return to courting the day … here I am with the kids, watching them ski along side Olympic Champions, Spanish, French, and Swiss Junior National Teams and the Sud Tirol Coach points to a man who looks to be dodging his forties rather well, “this one is Schlickenrieder…” I am enthused explain in my broken Deutsche-English, my memory of this phenom of a sprinter.  “He has made silver in Salt Lake in the Sprint.”  I watch him pass and dream a bit.

Near the end of the workout I spy Peter propping his skis against the Stelvio sign and snapping a picture for his sponsor, Salomon.  I offer to help this idol of mine from years past — “Would you like me to take a picture with you in it.”  Boom — I’ve broken the ice and am now talking to an Olympic Medalist!  It takes me a minute to convey my story, but yes he remembers the sprint, and is flattered I have made the connection.

We not only talk of ski racing, but also of the significance of the day and how Nordic Skiers are spokesmen for the environment.  He shares that he believes his homeland, Germany, is a world-leader in photovoltaics.  Most days he says he doesn’t have time for photos and chat, but he is very affable — offering that he is making a “revival” nearly ten years after taking the Silver Medal in the Sprint at the Salt Lake Olympics.  I am stoked and feel a real connection to this man who only existed before in my mind.

Shortly after this meeting I gather our team with the Sud Tirol Regional Langlauf team for a photo that makes me proud.  I explain the cause of Moving Planet and have a Swiss skier explain to the German-speaking-Italians what the significance of the day is and what we are supporting with our photo.  We are bringing together two continents and five countries under one cause and linked by the sport of cross-country skiing.  Pretty inspired indeed.

And for my play … well there is nothing I like better than going downhill on skinny skis — it sort of crosses the barriers of two worlds for me — and take me back to the beginnings of skiing for me and the sport itself.  Because of the recent snow — there are snowfields and bands of drifts that make a decent of several thousand feet possible.  I packed the kids in the van with Evan and pointed to a far switchback — “meet me down there.”  The ski was as adventurous as I had hoped, complete with crust, corn, rocks, grass, and some striding through a knee deep lake.  This is it! 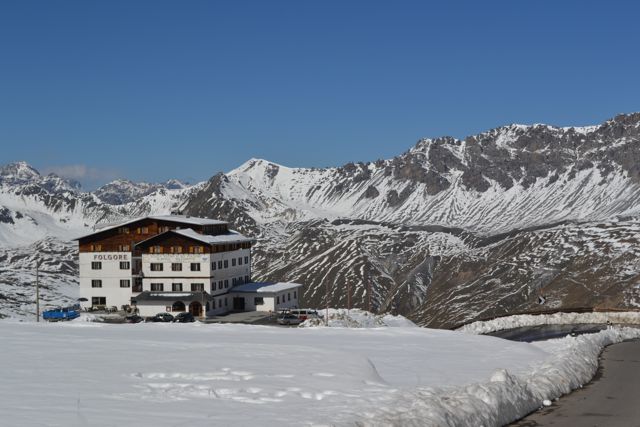