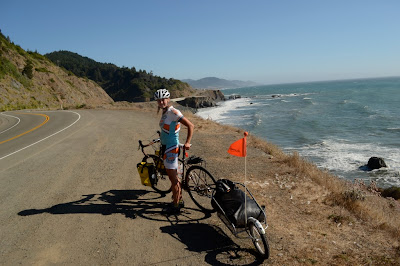 About a year ago, I moved out from Bend, Oregon. For those of you who’ve never spent a day in this small city oasis by the Deschutes River, it’s a pretty amazing place. Volcano-made mountains frame the West. Juniper and sage and open country to the east. It’s a place where one can ski through June, on either early morning crust or groomed nordic trails. As the county seat, the city of 80,000 entices a unique collection of individuals to the eastern edge of the Cascade Mountains.

The other day I received a message from an old roommate. It seems Sara Salo finished up grad school in Community Wellness at Oregon State University – yeah, that’s one really long commute – and decided to take what she learned on the road. Sara’s one of those people who gets an idea in her head, then goes for it. And I mean 100%.

Last time I saw Sara, we met up at Rincon Point, just south of Santa Barbara, California. I had just finished up the ski season and needed a little time with old friends and in the ocean. Sara was down there, learning from the food guru Jamie Oliver how to encourage schools to create healthier school environments. I remember her saying something about an obesity issue in America, and how schools that embraced healthy eating were making a real, tangible difference in the health of America’s young’ens.

Fast forward one year and Sara’s now on a solo, self-supported six-thousand mile bicycle across the United States to do all she can to help create healthier school environments. If you’re someone whose interested in reading this blog, I’d really encourage you to also check out what Ms. Salo is up to. 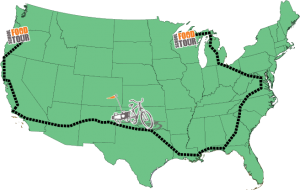 On another note, another old roommate by the name of Carl Decker is still making it in the mountain bike scene, while driving the Wheels of Teal as well. You can check out the ’92 Subaru at the X-Games here:

Until the next time. +Torin