FasterSkierSeptember 6, 2011
The Cutthroat is an 11-something mile trail race which begins at Rainy Pass, ascends to Cutthroat Pass on the Pacific Crest Trail, and then descends down to the Cutthroat trailhead. It’s a gorgeous run, with early-morning views of the high Cascades as you attain the pass at the halfway point. I’ve raced the Cutthroat off and on since its inception when I was in high school, and it has become a great mid-dryland season training marker for fitness progress. Last year when I raced it I had mono but didn’t yet know it, so I don’t hold that time in high regard. The year before however was a good effort to beat this time around, and two Saturdays ago I was ready to display my improvements.
Because the Cutthroat this year fell on the same day as the Cascades Crest 100-miler which Alison was racing we spent most of the day Friday getting her ready to go, and I completely spaced it on picking up my race packet and bib. I of course didn’t realize this until I was riding up the pass with Scott at 7am. I then had to operate on the hopeful assumption that my local status would provide some small pull for me with MVSTA, such that I could get a replacement bib in time for the start. This turned out to be the case, as Mike Pruett (Events Director of MVSTA) brought with him to the start the unclaimed bibs, and after some chiding I was numbered-up and ready to run. I put in a small warmup but focused on staying pretty low-intensity, as the start shoots right into a climb and I wanted to be fresh for the effort. I wasn’t sure who all would show up in the front ranks; Soloman Woras for sure: a local around the same age as the Greggs and myself who went on after high school to compete as a professional road, then cyclocross racer. Sol is a lean motor on two legs and I knew it’d be all I could do to hang on to him. We expected to also see Marcell Macarthur, a regional favorite who usually breaks the pack on this race with his shattering downhill efforts. And then there’re always several team runners from Seattle who jam their way into the lead group. My goal was to be top-5 to the pass; I have very mediocre ability to run downhill fast so I must rely on a strong climbing time to keep myself in the running for the lead.
From the gun Sol and I got into the front. The pace was quite a bit slower out of the start than last year, when Koos and Marcell decided to sprint the first mile. This year, seeing as how no one was interested in taking the lead (one guy even asked where the trail began, so we knew we had some advantages), Sol and I moved quickly forward. Once we hit the trail at the end of the parking-lot start, we picked it up. Then Sol REALLY picked it up, and I hung on him as we shattered the pack open and built a ~30sec gap on the rest of the field. From there it was our race to lose. Sol kept up a solid pace the entire five miles of the climb and I fought to keep the gap small, which I was able to do until just before the pass when he opened his lead to about 40 sec. 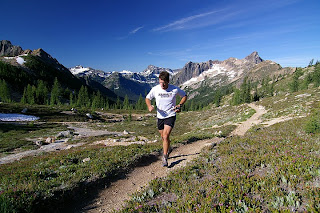