Yep. I’ve got 18 seasons of World Cup, Olympic and World Championship alpine results. Not nearly as extensive as my XC results, but it’s interesting data nonetheless.

As with any new set of data, you spend a bit of time just poking around looking at stuff. Today I’m going to share something that I thought was rather odd, but that could be because my experience with alpine racing is, shall we say, limited.

With slalom and GS races, since you have times for each run (at least, since ~2000; before that FIS didn’t seem to report both times) an obvious thing to look at is comparing performance across the first and second run. Strangely, I thought that the people who ski fast on their first run would tend to be the generally faster skiers, and so would be more likely to ski fast on their second run as well. (Using my patented “Fast skiers ski fast” analytical technique.)

So here’s what we see using all the data:

Don’t worry, I’m going to show you a second version that’s zoomed in on the area of interest. But first, let’s discuss all these outliers that are throwing the scale of the plot off. I am unsurprised that there are some extremely slow times here. Alpine skiers will sometimes stumble, miss a gate or something and proceed to hike back up the hill to get around the gate they missed, although I am told that this is very rare at this level. And indeed only ~1.5% of these results seem like they could plausibly be connected to someone having to hike.

Ok, let’s zoom in on the interesting region: 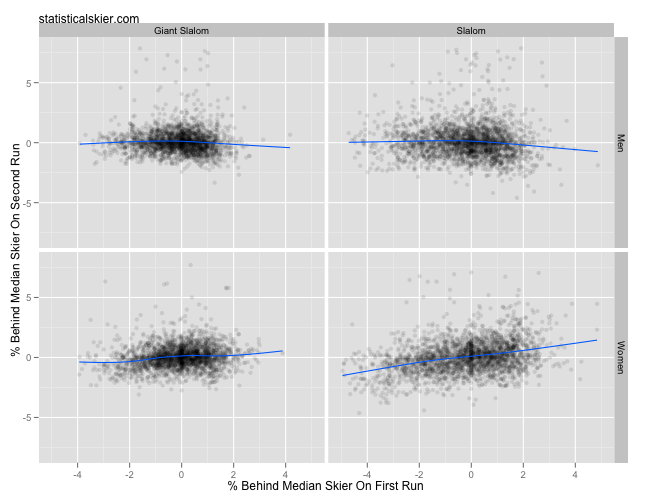 While looking at the first plot, above, I didn’t think much about the presence/absence of a correlation, since it was so hard to tell given the scale problems. There appears to be a slight correlation in the women’s slalom races, but not elsewhere.

What could be going on here? After bouncing this off of a few people more knowledgable about alpine racing, I can report a few possibilities:

Back Side of App Gap in the Rain