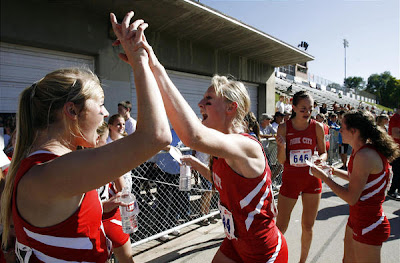 From the Deseret News By Steve Mundee
SALT LAKE CITY — Considering that Park City has now won nine out of the past 10 state titles in cross country it sounds weird to say that the Miners were surprised to win the title again this year. However, that is the case with nationally ranked, No. 13 Ogden, competing.

“Nobody believed we could do it. I’m not even sure I believed it,” said Park City coach Jeff Wyant. “These girls rose up.”

Wyant has led the Miners to 12 total state titles during his tenure at Park City, but says that this year was one of the sweetest because they weren’t expected to win the race. Wyant is also quick to credit the athletes for the program’s continued strength.

“We train hard and we’ve been lucky getting girls who want to win,” he said.

Alisse Walker and Annie Orr finished ninth and 10th, respectively. All seven Park City runners finished in the top 20, and they all finished within a 34-second window.

However, the Tigers saw athletes finish one and two individually in the race. Jamie Stokes took first place by a comfortable margin with teammate Sarah Feeny crossing the line next.

“It’s been my goal for a long time,” said Stokes. “I can’t believe it actually happened.”

She was the leader for nearly the entire race, winning with a 23-second margin.

“I didn’t want to leave the race up to chance,” she said.

“There is not a senior in the group, and they were hungry,” said Ogden coach Dan Hall.

The Tigers were comprised of two juniors, three sophomores, and a freshman. When asked the secret for getting such a young team ready to compete so effectively coach Hall said, “It’s work ethic; they want it.”

Ogden wanted it so much the boys have been talking for weeks about championship rings and telling Hall that they are going to give him a Gatorade bath. Hall finished his comments by saying that the boys’ victory was a relief and that “it was a sweet comeback” after the disappointing meet the girls team endured.

Ben Saarel of Park City finished first place in what he called a “crazy race,” but had nothing but compliments for Jordon Cross, the second-place finisher from Ogden.

Saarel’s strategy was to hang with Cross for the majority of the race and overtake him towards the end, which worked to perfection.

Congrats to the Miners. Look forward to getting in a few runs before Footlocker Regionals… -Torin 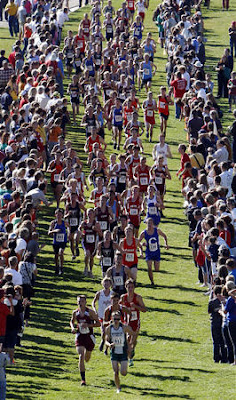 Getting Faster, Do It If You Can