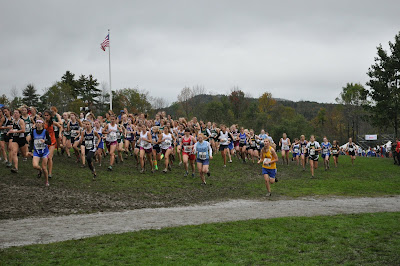 Today we headed up to Thetford, VT for the Woods Trail Run – a large invitational cross country race with over 800 girls and 1000 boys racing. The temperatures were in the high 40s/low 50s and rain throughout the day made the course exceptionally muddy. The Thetford course is known for being a challenging course and with ankle deep mud throughout much of the 5k loop, times were slower than normal for most runners. Calvin’s 7th place performance in the first seed race was a big highlight for the team. Winter termer Russell Boswell matched Calvin’s performance with a 7th place finish of his own in the junior high race. Results & photos below:
Boys Overall Results
Calvin – 18:00
Paddy – 19:05
Tyler – 20:41
Gino – 20:54
Hamish – 21:40
Girls Overall Results
Issy – 22:58
Kate – 25:29
Tess – 26:06
Boys Junior High Results (2.7k)
Russell – 11:01 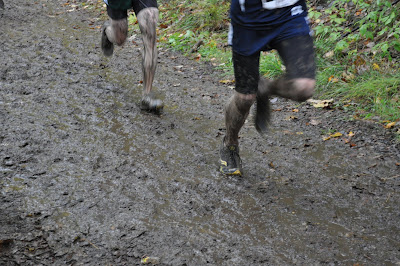 The footing was a little slick today! 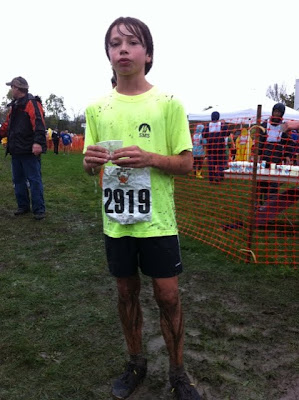 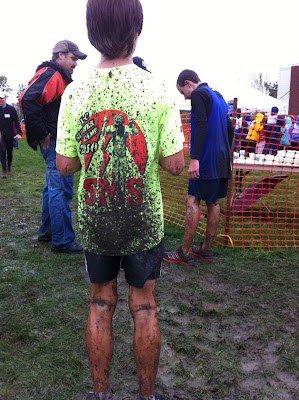 Flourescent shirt no more! Russell raced earlier in the day and headed out to get dry before the rest of the team arrived, but he represented SMS well with his 7th place finish in the junior high race. 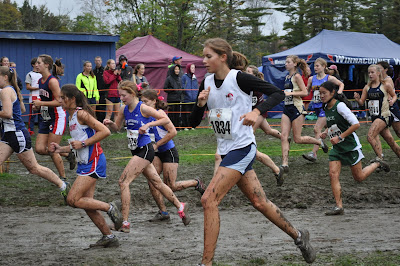 Tess gets off to a great start in the second seed race. 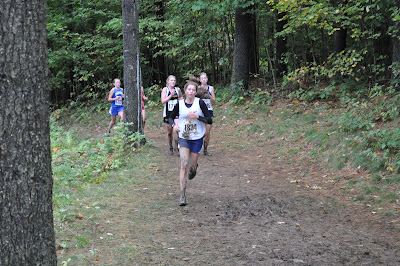 Tess flies through the woods! Her time of 26:06 was a PR on this course, despite taking a fall and running through deep mud! 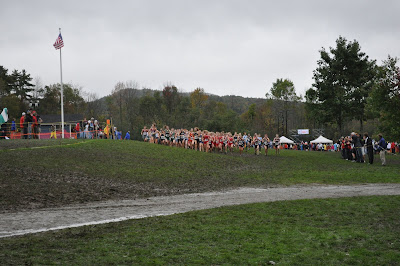 Runners race in seeds determined by time with several hundred runners going off every 20 minutes. 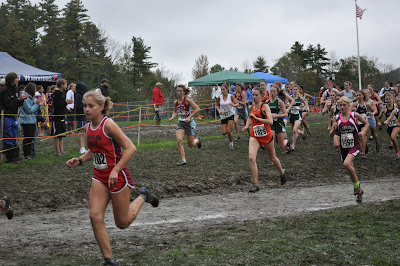 Issy, center in white, gets off to a great start in the first seed race. 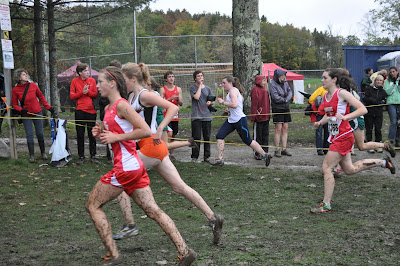 Kate is a few steps behind Issy as the race heads into the woods for the lower loop. 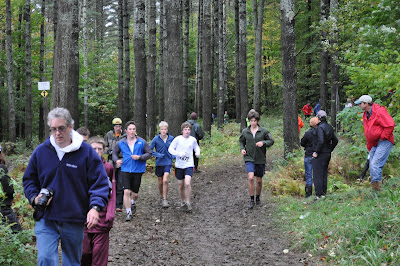 Hamish, Calvin, Tyler, & Gino warm up for the race. All our boys raced in the first seed race. 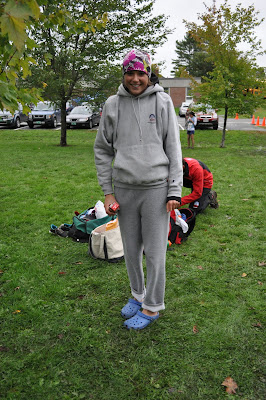 Tess gets bundled up to spectate after her race! 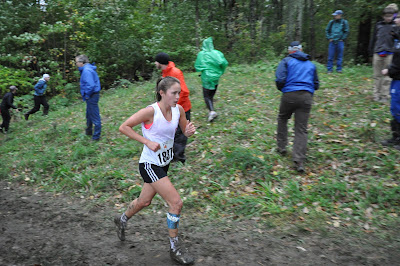 Issy on her way to a 33rd place finish. Issy took the SATs this morning and then hopped in the car, drove an hour and a half, got a 15 minute warm up in and jumped on the course! 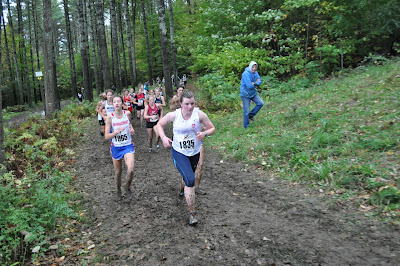 Kate leads a pack of girls out of the woods and back onto the athletic fields. 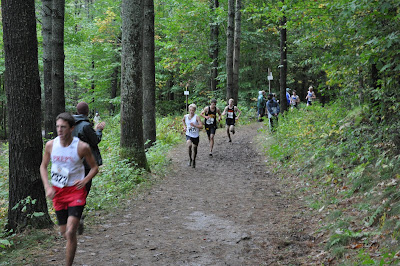 Boys race gets underway… Calvin came out of the first loop in 13th place. 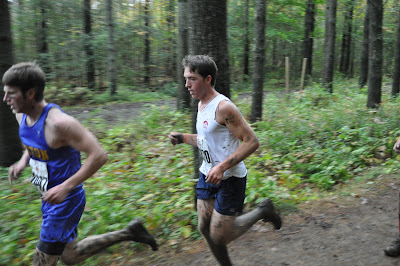 Paddy was in the mid-50s after the first lap. Like Issy, Paddy was fresh off a few hours of standardized testing at school, but still had a great race. 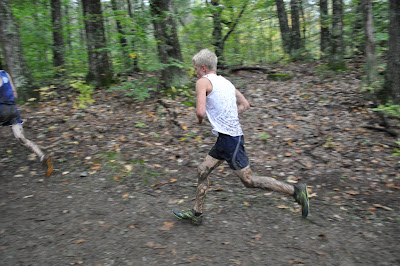 Calvin used the hilly upper loop to his advantage and picked up several places in the second half of the race. 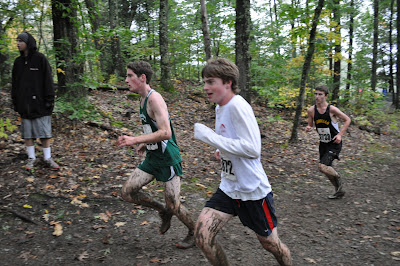 Tyler started faster than he typically does and had a great race as our third finisher today. 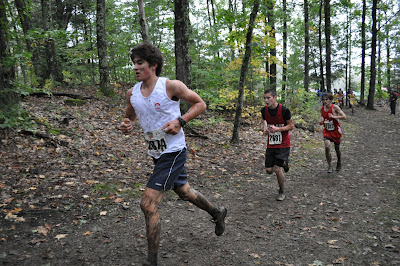 Gino kept Tyler in sight for a good chunk of the race and cruised through the mud. 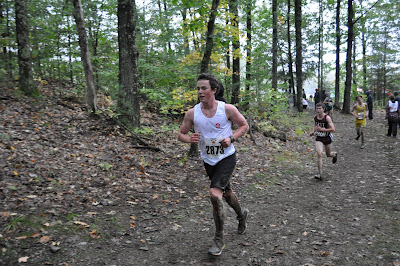 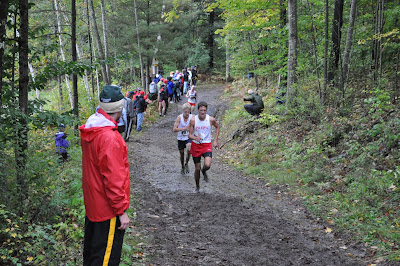 Calvin comes out of the upper loop in 8th place – he ended up passing the runner in front of him in the final 1/4 kilometer to take 7th place overall. 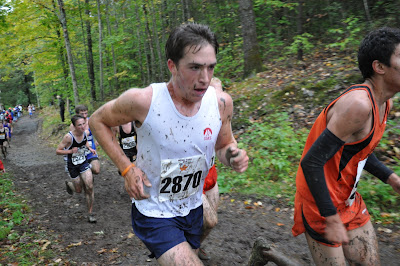 Paddy made up a lot of ground on the upper loop and finished 36th and mud-splattered! 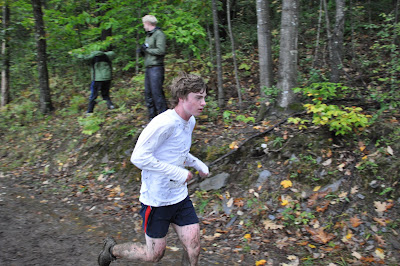 Tyler in the last K of the race. 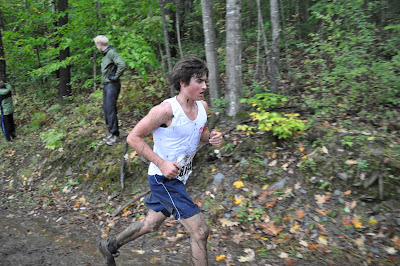 Gino charges up the last hill and heads for the finish. 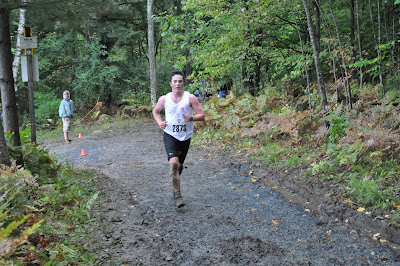