A quick look at our lovely neighbors to the north!

I’m going to focus on the folks on the World Cup squad, starting with the men: 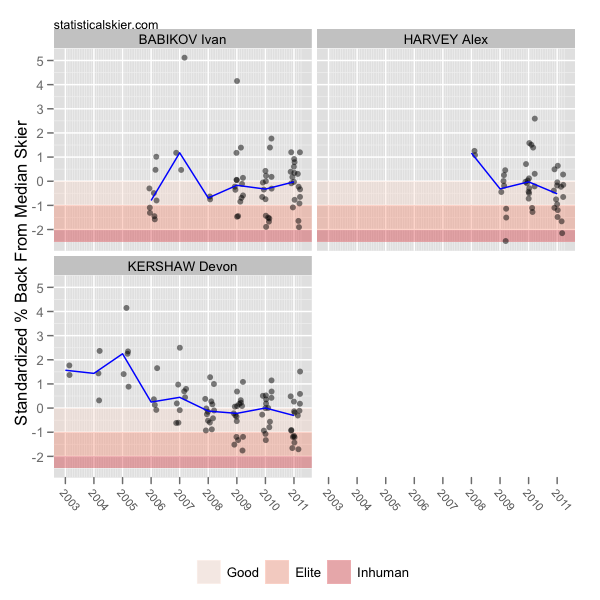 These are the WC level distance results (excluding Len Valjas). I confess I’m a little worried about Ivan Babikov, who had a rough season last year. His trend over the past four seasons appears to be headed in the wrong direction (albeit very slightly); we’ll see if he can rebound for some strong freestyle results this year.

Alex Harvey had an interesting season last year, and he’s still quite young. Given his age and how competitive he seemed in distance races last year at times, he’s the North American skier I’m most excited about at the moment. (Yes, even more than Kikkan Randall.)

Devon Kershaw also had a strong season last year, particularly in the Tour de Ski. One thing I wonder about is how well he’s been able to figure out travelling back and forth to Europe. My only reason for saying that is the odd ‘clustering’ effect you can see in the last three seasons of his distance results. They each show two distinct groups of results, one very strong cluster and one more mediocre cluster. For instance, last year he seemed to fade into March. What I’m keeping my eye on with him is consistency, then. Can he sustain those top level results through an entire season?

The women are more focused on sprinting: 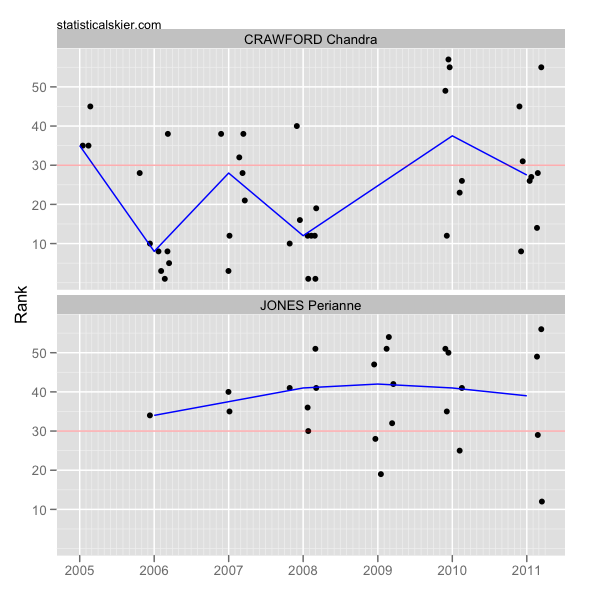 We’re still waiting for Crawford to regain the form she showed between 2006-2008. Last year saw some progress, but we have a ways to go still. I’m not sure what to make of Perianne Jones. Her best distance result was 33rd and that was back in 2009. She’s managed to move past qualification 1-2 times per season for a few years in sprints. But I don’t see evidence of a strong trend in one direction of the other, so I’m in ‘wait and see’ mode with her.

Obviously, I haven’t said anything about Len Valjas. He just hasn’t raced much at the international level yet, so I’m reluctant to make any graphs for him.

Hello, my name is Jaakko Ylihärsilä

One down, Many to go!