Holly BrooksNovember 2, 2011
Monster Blog Posts that is….. I’ll admit: I have been procrastinating with my posting because I have a nasty habit of being all-inclusive with my posts. I won’t write unless I have time to do a really, really good job and honestly, I’m crazy busy and those ultra productive long time windows don’t present themselves very often.  So, my goal is to make smaller posts more often – let’s see if I can do it? 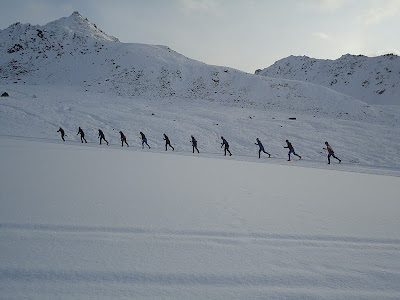 Hatcher’s Pass, AK (this season!)
In theory I’ll have more time for blogging & tweeting in just a few days.  My initial plane ticket departs from Anchorage late Saturday night and I’m scheduled to arrive in Oslo, Norway shortly thereafter.  However, the word on the street is that Beitostolen and really, all of Europe are suffering from lack of snow.  The entire US team is scheduled to compete in FIS opening races November 11-13 but they are threatening cancellation due to lack of snow.  Apparently just about every skier in Europe has flocked to Munio, Finland where organizers managed to save 3k’s worth of snow from last year (!) to roll out for training.  No offense to Munio, Finland, or the entire continent of Europe but I’m happy to be in Alaska rather than battling it out on a small gerbil loop with everyone else and their mom!
Enough about that though – here are some pictures from the lack couple of weeks….  in reverse chronological order, ENJOY! 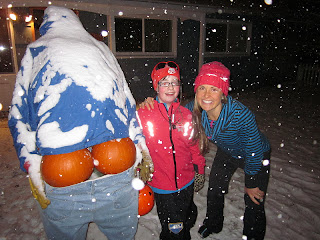 Our neighborhood get OVER RUN with kids on Halloween – plus we had a sweet snow storm.  Here I am with Ariana, my neighbor who dressed up as ME for Halloween. (I was super touched!)  Oh, and our snow/pumpkin man was a popular part of the night as well.  Lots of trick-or-treaters got their pics taken with him! 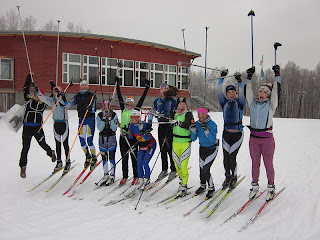 We (as in a big part of the APU crew) spent the last couple of days up in Fairbanks getting some quality time on-snow and helping out with the first annual “First Tracks” state-wide high school ski camp.  Approximately 65 kids from around the state received coaching from our coach, Erik Flora, and got to chase the APU elite team around Birch Hill for four hours per day.  There were some tired pups at the end of this camp, including me!  I was really impressed by the level of fitness that many of the skiers in the group had – plus, everyone had a fantastic attitude! 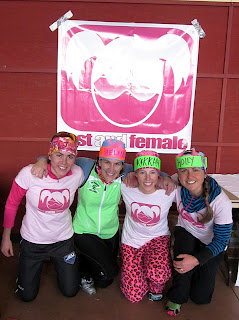 As if the First Tracks camp wasn’t enough busyness we capped off the long weekend with the first ever Fast and Female Fairbanks. Big props to Becca Rorabaugh for making it happen in her home town. It was a blast! 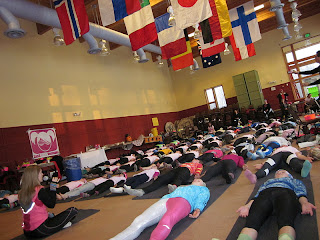 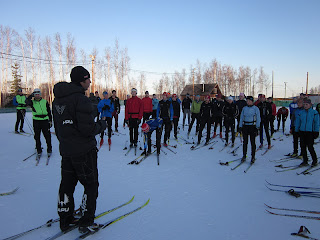 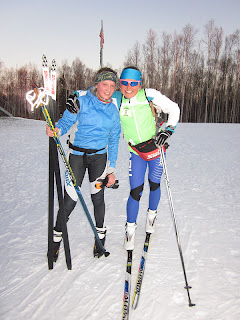 Me and Ana, my team sprint partner!  Ana’s fitness and toughness was especially impressive.  Last Saturday she skied with Kikkan, Becca, and myself for hour 4 on the day – after our team sprint relay.  We weren’t skiing slow and this first year J2 hung with us for the last hour of the day!  Watch out for her in the races this year girls!

Hanging with some of the APU junior girls 🙂
Tired junior girls putting their feet up after a hard day’s training: 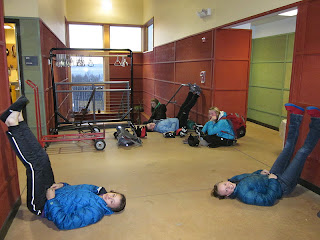 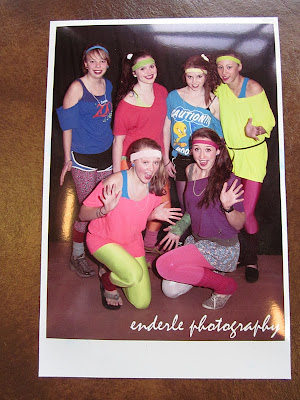 On top of high quality skiing and coaching this camp was top-notch in the fun factor as well.  Friday night featured a Halloween dance complete with DJs and an official photographer.  The APU junior girls went all-out 80’s for the event!  A big shout out to Mike Hajdukovich and his organization, Challenge Life for doing a KILLER job in organizing the camp! (Check out his awesome website to learn about the cool basketball camps he hosts in remote Alaskan villages and towns). 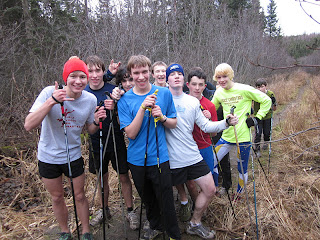 I had to add some pictures of the APU junior boys who have also been rocking it at training. These boys made L5 bounding look easy the other day! 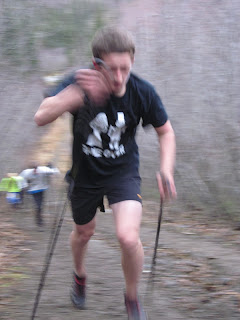 So fast the camera can hardly capture it! 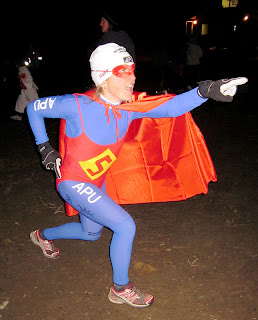 Here’s a token shot of my Halloween costume.  I wore it for a running race last week and for the entire three hour OD in Fairbanks on Sunday! 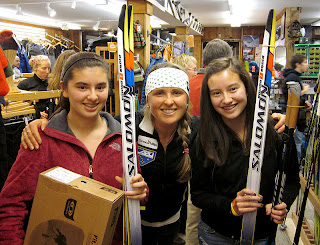 Last week we also had an APU/AMH night were athletes and coaches help our juniors and masters hand-pick new set ups for the upcoming season.  Here I am with the Albo sisters and Salomon Complete packages!  SWEET!
********
There is a saying that is repeated often on our team: “If you want to be a swimmer, swim.  If you want to be a skier, ski!”  Well, that is exactly what we have been doing!  Even though it’s only the second day of November my timing has been on step this year as skiing at Hatchers was ready the day after I returned from Park City and skiing here in town at Glen Alps just got good – the day after returning from Fairbanks.  So far this fall alone I’ve logged 25 quality hours on snow. Add that the 75 hours of glacier skiing I did this summer and I’ve been SKIING!
Here are a couple shots of Hatcher’s Pass, an incredibly dependable early season ski spot for South Central, AK. (Special thanks to the Strabel family for doing a KILLER job with the grooming up there too!) 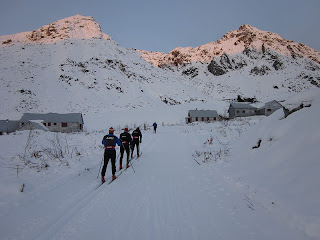 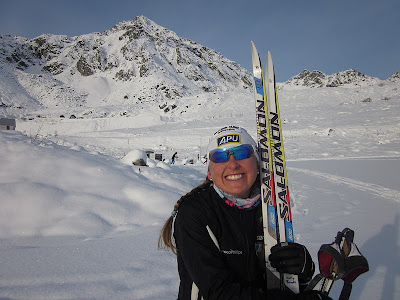 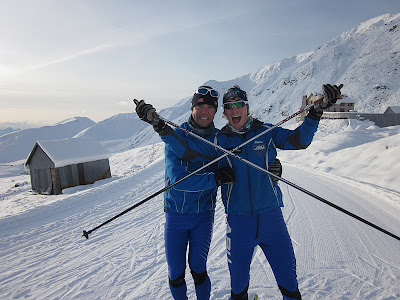 Erik and Reese – not sure what’s going on here? 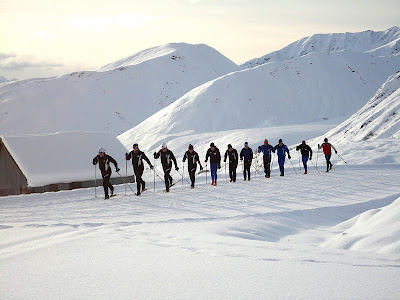 The team skiing in tracks, on Swix extra blue! 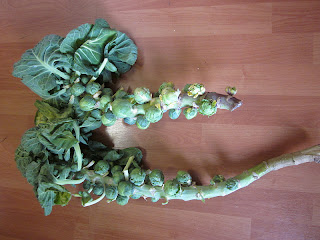 My friend Linda has a beautiful garden and she hooked me up with these brussel sprouts (my favorite veggie!) that she grew! 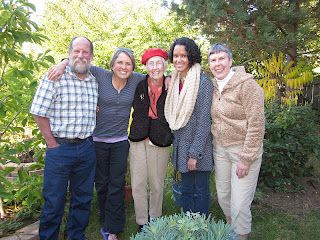 On the way home from the Park City altitude camp I had a quick layover in Seattle to see my family.  Here I am with my dad, Farmor (grandmother in Swedish) cousin Zahra & my mom.  In our family we had four separate trips to the airport in one day…. a bunch of jet-setters!
Last but not least, I have to include some pictures from a weekend trip I took at the end of the altitude camp to Bryce Canyon, Utah.  When I made arrangements to attend the PC camp I knew I would be tired and ready for a change of pace at the end of a solid two week block. This summer my training has been incredibly ski-focused and I knew that I could benefit from spending a day in the red rocks with some good girlfriends! 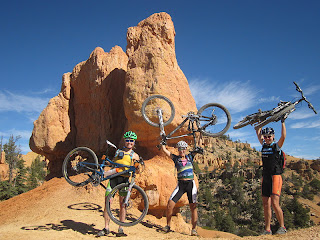 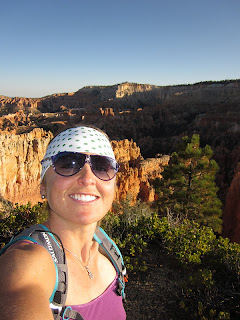 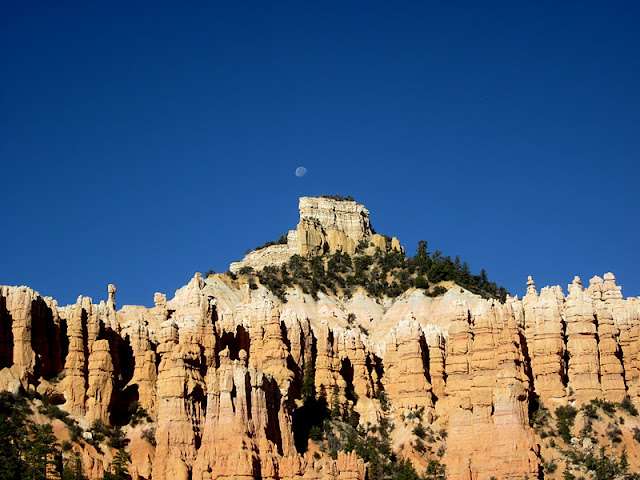 The spectacular Bryce Canyon with the moon overhead!
That’s a wrap for now…. I certainly didn’t succeed in killing the monster – (the post ended up huge as always!) but I’ll post again in the next couple days.  In the meantime, cross your fingers for snow in Norway & thanks for reading!
Sincerely,
Holly 🙂