A decidedly mixed weekend for the North Americans, something we’re used to by now I suppose. I suppose that Kikkan Randall and Alex Harvey were the main bright spots, as well as Len Valjas’s excellent sprint race.

Let’s start with some of the American women: 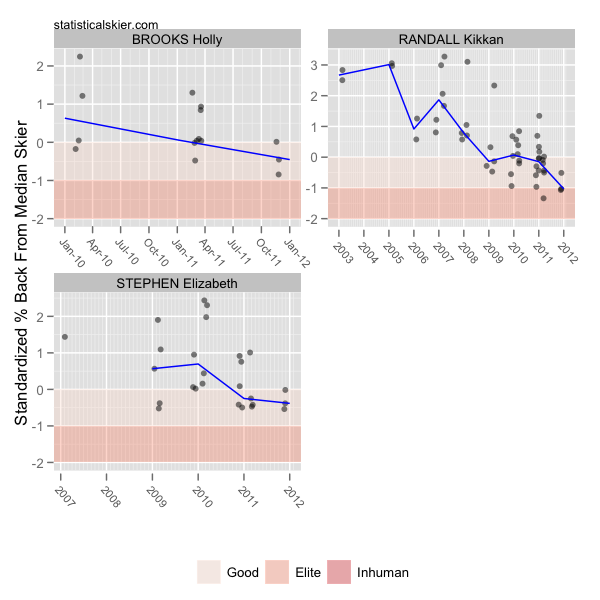 Kikkan really has started quite strong in distance races. Many Americans noticed the strong races that Holly Brooks had as well, and as you can see they are clearly a step in the right direction for her. Liz Stephen also had some strong races, but I’d caution that they don’t (yet) suggest a significant improvement over last year. Certainly, even just consistently skiing this well would be excellent progress as well.

I’ve talked a fair bit about how if Kikkan Randall is going to be competitive in the WC sprint overall she’s going to need to improve her classic skiing. I wasn’t just making that up either: 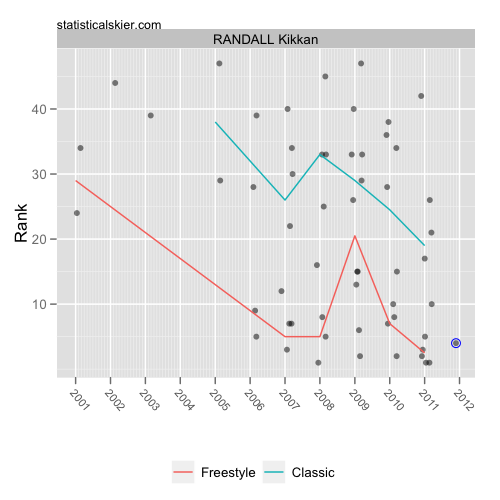 Traditionally, her gap between classic and freestyle sprints has been significant, which is why the classic Kuusamo sprint (circled in blue) is such a promising sign. Now apparently Marit Bjørgen is skipping both Dusseldorf and Rogla to focus on the Tour de Ski; both weekends include freestyle sprints. That’s a pretty huge concession in sprint points, in my opinion. This strikes me as a huge opportunity for Randall, if attending these races was part of her plan anyway.

The American men didn’t have quite as promising results, sadly: 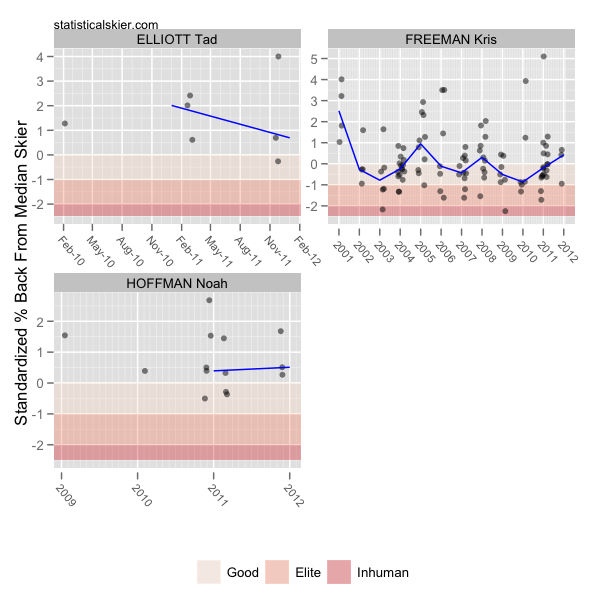 Tad Elliott’s results certainly show some improvement. Hoffman’s distance results haven’t been spectacular, and Freeman has gotten off to a bit of a slow start as well. Not much to say here except that hopefully a few starts under their belts will loosen them up.

As for the Canadian men: 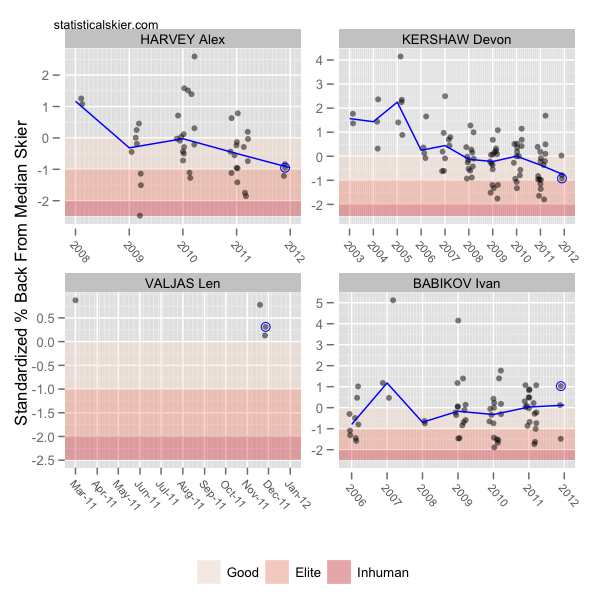 I’ve circled Sunday’s classic pursuit stage in blue, which I’ll come back to in a moment. Devon Kershaw clearly wanted more from this weekend, but calling his results bad is mostly a reflection of how high the expectations have become around him. You can see that last season he had a clump of fantastic results and a clump of pretty bad results. So far, he’s been more or less in the middle.

I circled the classic stage to point out that while both Harvey and Kershaw had strong results, they were by no means unusually good results. This is a good sign, I think.

I still feel like I’m not giving Len Valjas much attention, but he’s still done few enough races that his graphs look a little superfluous. Let’s just say that he had an awesome result in the sprint and leave it at that.