Lenny ValjasNovember 26, 2011
Yesterday was the first World Cup Sprint of the year. I had a really solid day of sprinting. The conditions were very unusual for Kuusamo… Usually its really cold and slow, but this year it was right around the freezing point and all ice. It made for some fast laps out there. I finished 4th in the qualifier and felt confident going into the heats. I made the call before the race to pick a pair of skis that would have tons of grip for the climbs but I knew that I would have trouble keeping up with the pack on the downhills. At the start of all of my heats I would lose contact with the other guys on the first big downhill, and have to work my way back to them. When I got to the final big hill I was always 5th or 6th…  I had such amazing grip going up that hill, I could glide up without any slips and make up all the time I needed.
This was the first time I have ever made the final in a World Cup sprint. It was a pretty good feeling at the start line knowing that the worst I could finish off the day was in 6th. About 10 minutes before the start of the final, it started to snow pretty hard. I was skiing on full klister, which would ice up on the fresh snow if I stopped moving my skis. On the start line I was just focussing on keeping the skis moving. I could feel them wanting to ice up… I got off the line without any problems until the top of the downhill. My ski must have got caught up on some fresh snow and my klister grabbed and almost threw me face first down the hill. Luckily I was able to hold on and not wipeout.  The final went exactly like the other heats, I got dropped on the downhill and bridged the gap back up the last hill. Coming into the final straight I was still in contact with the leaders but I was sitting in 6th. I was able to pass the Finnish skier in the final straight and I was gaining on the Norwegian but ran out of time. I finished the day in 5TH! I couldn’t believe it, I didn’t think I would be making the final at all this year.
There are two more races in this Kuusamo mini-tour, today is a 10 km Skate, and Sunday is the 15km Classic pursuit start.
Here are a few photos from the heats. 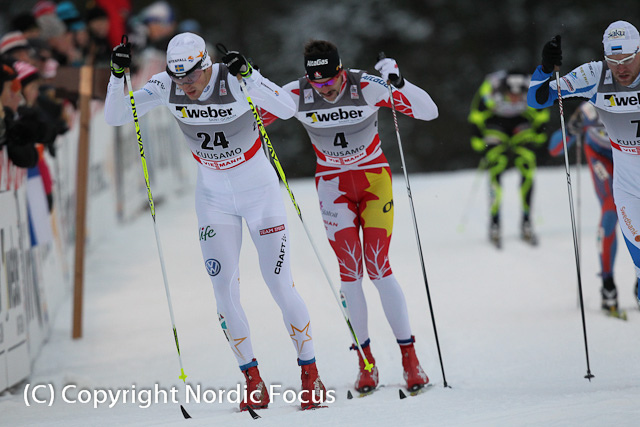 Not Quite Winter in Sweden