Holly BrooksNovember 10, 2011
We just got word that the World Cup races scheduled for next weekend in Norway are on!  The only caveat…. there is currently bare ground at the chosen venue, Sjujsoen!  But, leave it up to the Norwegians to pull off a ski race in sub-par conditions!  This morning over a cup of coffee Rob likened it to the US cancelling the Super Bowl.  While the first World Cups of the season aren’t a championship event, maybe this is better compared to a regular season NFL game…. 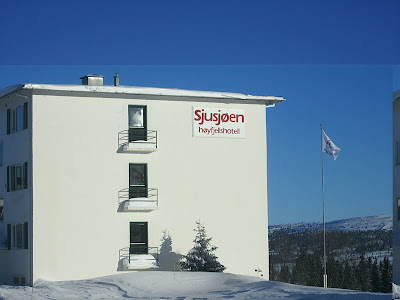 The cool thing is that I am familiar with Sjujsoen.  Last season a bunch of us chose Sjujsoen to conduct our pre-World Champs training camp.  Sjujsoen is a small ski resort located right outside (above) Lillehammer.  When we were there they had AWESOME skiing and great trails.  The groomers groomed constantly so there were always fresh tracks.  The Norwegian Birkebeiner course also goes through this area.
I am certain that this trip to Sjujsoen will be a bit different. We were just instructed in an email from Chris Grover, the US Ski Team Coach to organize bringing roller skis for training.  Apparently the snow situation in Kuusamo, Finland, the next stop on the World Cup is bare at the moment as well.
As difficult as it is to leave Alaska where there is plenty of snow and the conditions are quite literally PERFECT I’m excited to go.  I certainly don’t train my butt off year round to stay at home and train!  If only the World Cup could come to Alaska!
More soon – we have a classic sprint time trial ON SNOW this morning!
Cheers,
Holly 🙂

Pre-race pickups, parking and getting pumped