Doogiski over at NordicXplained asked how Pentsinen’s 4.3 second win in qualification on Friday stacks up historically. Quite impressively, it turns out.

That’s the second largest qualifying round winning margin for the men’s field in WC, OWG or WSC races. The only larger one was almost 10 years ago, with a 4.7 second victory by Björn Lind in a freestyle sprint in Germany in December of 2001. So we’re reaching back to the very beginning years of sprinting here.

A winning margin greater than 4 seconds in qualifying has happened more often with the women: six times. And it’s basically a who’s who of dominant female skiers over the past decade: Skari, Neumannova, Bjørgen (twice), Kowalczyk and Majdic. Skari’s is particularly absurd. She won qualifying in a WC sprint in Italy way back in the day (December 2001 again) by 8.4 seconds! It was classic, so maybe waxing was an issue, or maybe Skari was just that fast. Interestingly, the woman she beat that day be 8.4 seconds was Petra Majdic.

More generally, the typical winning margin in qualification is just under a second for the men and about 1.5 seconds for the women.

And how is Bjørgen faring so far this year? 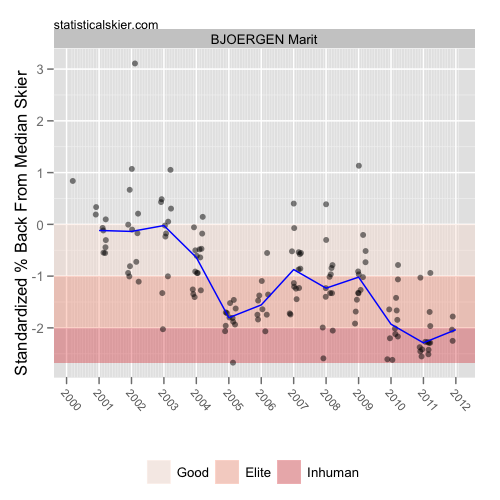 She’s certainly still winning everything in sight, but she’s not really faster than last year. Although, that’s not surprising, since “regression to the mean” would lead us to believe that she’s regress a least a little this season.

A few of the men who had strong weekends: 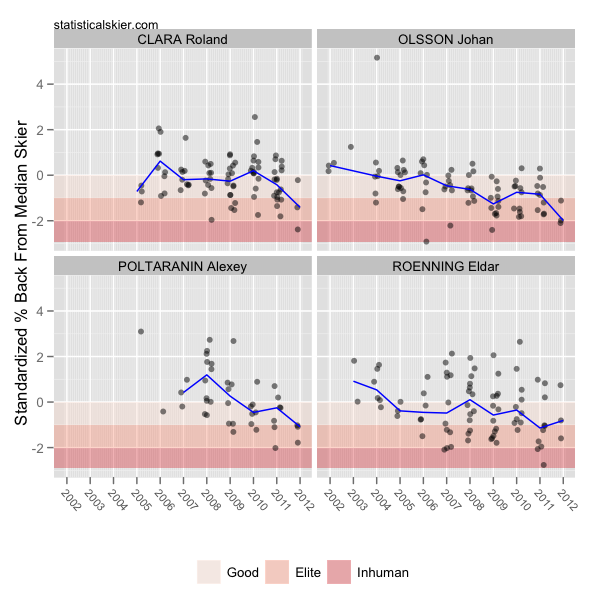 Eldar Rønning ended up doing very well in the overall mini-tour thanks to some very strong classic skiing on the last day. But overall, his skiing hasn’t been out of this world, and might even be a bit of a step back from last season. Remember that overall tour placings are heavily dependent on the specific events. In this case, strong classic skiers had a lot more space to make up ground, and so the overall tour may have favored classic specialists somewhat. If the techniques had been reversed, Rønning may not have fared so well.

On the other hand, Clara, Olsson and Poltaranin have all skied somewhat better so far this season overall. It’s particularly exciting to see from a guy I think a lot of people didn’t have on their radar (Clara), an older skier coming off a few bad-ish seasons (Olsson) and a guy from a “different” country (Poltaranin).

I plan to talk about sprint heat times when I can, but FIS messed up the heat times royally (at least, the times that are available online), so not this week. Maybe next time. I’ll have words about the North Americans on Wednesday…