Today is the last day up here; I head back to the Methow early tomorrow morning to do several things. First, I need to drop off the now-tested Madshus skis to Mark at Nordic Ultratune to get some grinds on them in time for West Yellowstone. Second, Alison and I have a meeting with our wedding caterer. Third, I get to have a massage. Then I might do a workout. Or sleep.

Scott and I had mused last night on the prospect of intervals today. We have both been encouraged at how fresh I’ve felt every day here and how I’m seemingly acclimating quite quickly. However, he cautioned against doing too much too soon, given that the first races are in less than a week. Plus, there’s always another shoe to drop. In the past I’ve gone through periods where I feel really good and try to take a bite out of the world, then a few days later I’m exhausted. So he left it to me, to see how I felt this morning before making a decision.

I woke up to sunshine and thought I felt pretty good. I put some new glide wax on the skate skis and started walking over to the trail when i knew it wouldn’t be an interval day. Each step was just a *bit* more of an effort than usual and my HR was a bit higher than it should be. So that answered the question of the intervals, and I opted for a long easy ski. 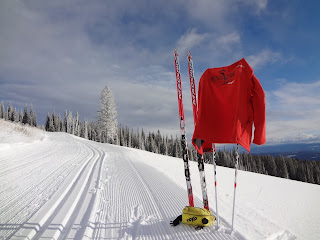 They finally got the Piston Bully out on the trails, but given that there was so much air in the snow the tracks were really, really soft. Not the best day for hard intervals, anyway. So I took advantage of the sunshine and skied to the top of the mountain.

I also managed to capture the buck I keep seeing out on the trails. He’s been lusting after a voluptuous doe also wandering about, and I think I inadvertently skied up on them during a tryst. I got a shot of him as he was running to the woods: 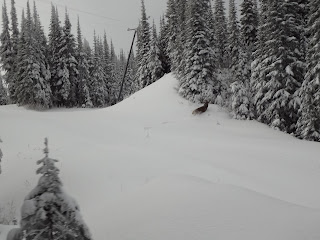 Returning from my ski I rallied a big ole’ lunch and settled into some internet time. I’m going out for another ski in about a half hour, then it’s time to pack up and get ready to leave tomorrow morning. 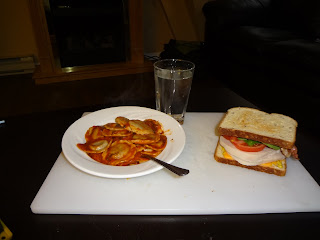