Another season is just around the corner! While the USST saw some changes over the off season, the folks we are most likely to see top results from are still the Big Three: Kikkan Randall, Andy Newell and Kris Freeman.

My expectations and questions for Freeman are summed up in this graph: 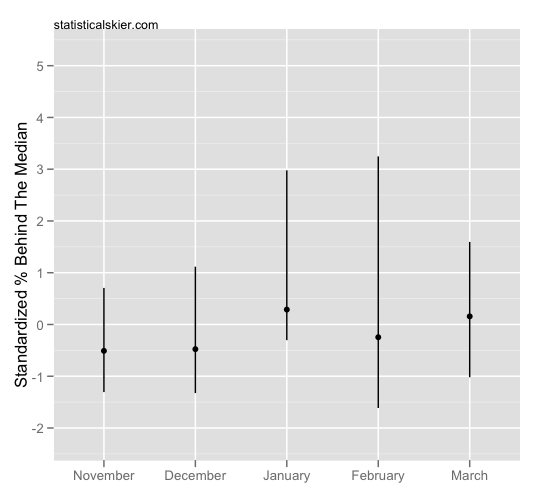 This shows his median (and 10th/90th percentile – errorbars) WC results by month, using standardized percent behind the median skier. Freeman has tended to see a big dropoff in January and has had inconsistent results mid-season. The differences between the months may not seem huge, since the y axis units are not something you’re used to thinking in. But keep in mind that a difference of 0.5 can easily mean the difference between 10th and 30th (or more).

So I won’t be surprised if Freeman comes out of the gate skiing fast in November, but I’ll be very curious what happens when we hit January.

As for Kikkan Randall, I think there’s probably a lot of excitement surrounding her, considering the breakthrough season she had last year. I’ve spoken before on this blog about her chances for contending for the WC sprint title, and I think she certainly will be a podium contender in every freestyle sprint she enters. But here’s a minor note of caution: 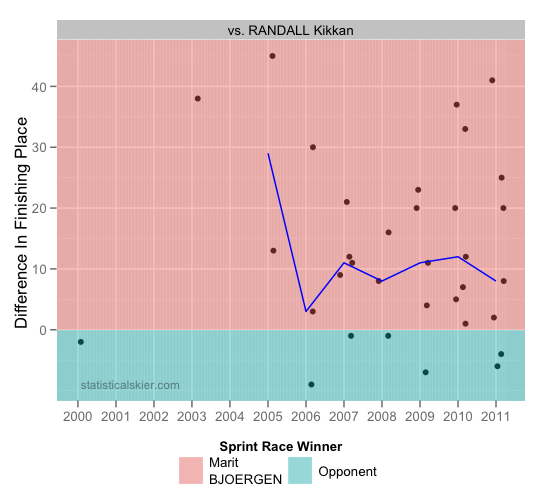 This graph shows the difference in finishing place in sprint races when Björgen and Randall have skied against each other. My point here is that Björgen is still probably the overwhelming favorite in pretty much any matchup. Sure, Randall beat her twice last season, but she’s still a ways away from what I’d call ‘parity’.

Finally, Andy Newell. He has to be simultaneously one of the best and most frustrating American skiers in history. And by that I only mean that after all the consistent top 12 results he’s had over the years I think I’m speaking for everyone when I say that I really, really am pulling for some podiums, or at least some consistency in making it through to the finals.

So it’s with a little bit of concern that I note the slight uptick in his results last season: 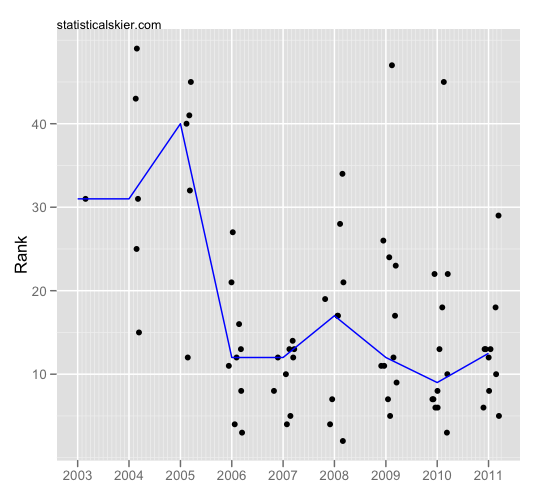 And it’s slight, but the last three seasons seem to have seen fewer forays into the top 6. I think Newell had some issues with his training last year, so hopefully he’s sorted that out and I can finally cheer for him in the finals regularly, rather than occasionally. He deserves is after knocking on the door for this long.