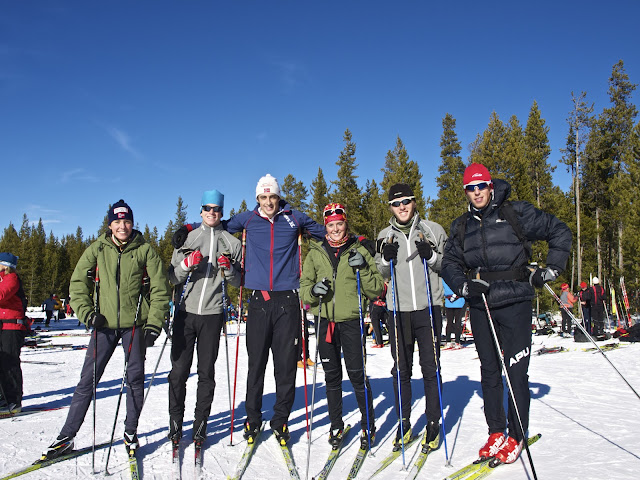 It was a beautiful day out here in West Yellowstone for a classic race.  Post race photo of GMVS past and present: Heidi, Devlin, Coach and Athlete Evan, Kristin (Williams), Ryley, and Peter (APU).
I got out to the stadium early with skis and waxing equipment to find rock hard tracks, sub zero temps, and gathering masses of teams from throughout the West and Canada.  I prepped our skis last night through top coats and ironed in base layers for kick which proved important with abrasive, cold snow.  After a quick test I found a top coat for the girls and got to work.
MK and Heidi were in the B seed this morning which started in front of the A seed (B, A, C) so they had a unique opportunity to take to the course as rabbits.  As they arrived in the stadium they were present with the situation at hand, very collected, and ready to ski their own race and focus on technical and strategic goals instead of being overwhelmed — I was very impressed. 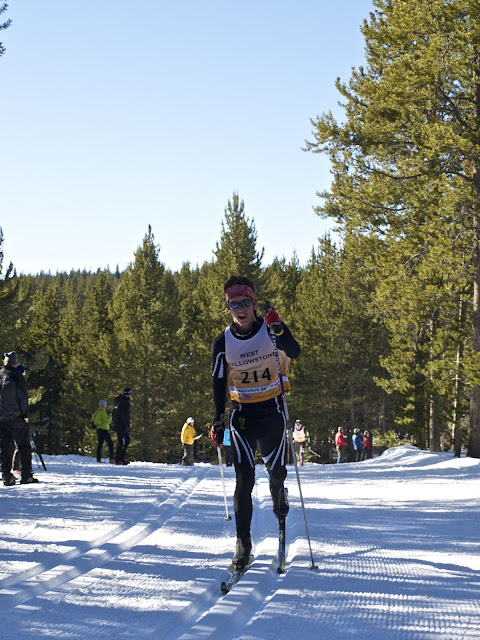 The temps rose steadily through the morning–at least in the sun–and the wax didn’t change that much by the time the boys went out.  Devlin was giving a new pair of Fischers their first competitive ride and adapting to racing at altitude.  Somehow he handles this stuff with grace: a smile? a shout out to MJ? the satisfaction of skiing the best first 2km of classic “in my life?” Solid work. 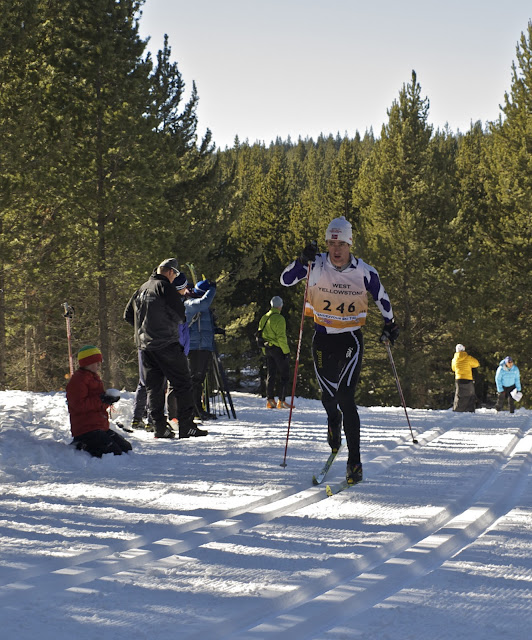 Evan dusted off his old cow suit and pridefully ran the dual tags of Williams College and GMVS for the first time in competition today.  Evan is in fantastic shape and is a boon to our training group.  Today he led the boys with a 58th place finish after helping the girls warm-up. 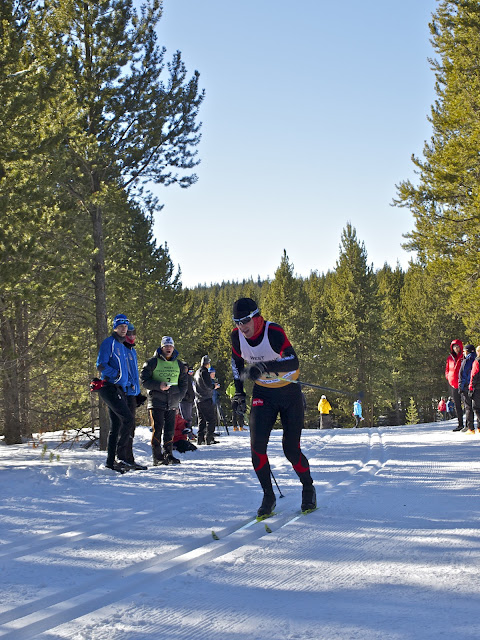 “Uncle Dave” Chamberlain also got into the action today and skied a fantastic race, placing 23rd in the suit of his new employer and GMVS Sponsor, Boulder Nordic Sport.  Dave traveled to Italy with us last fall and always provides good energy to our team. 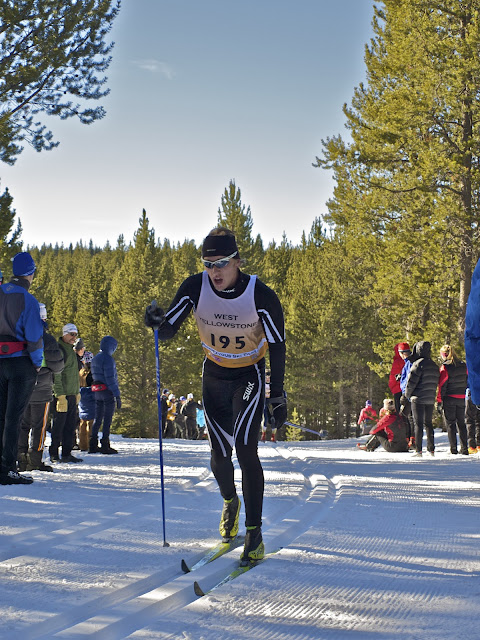 Ryley is making gains in his his classic technique.  We are working on flexibility and moving dynamically on skis–he is as strong as an ox and with continued work he will be a force. 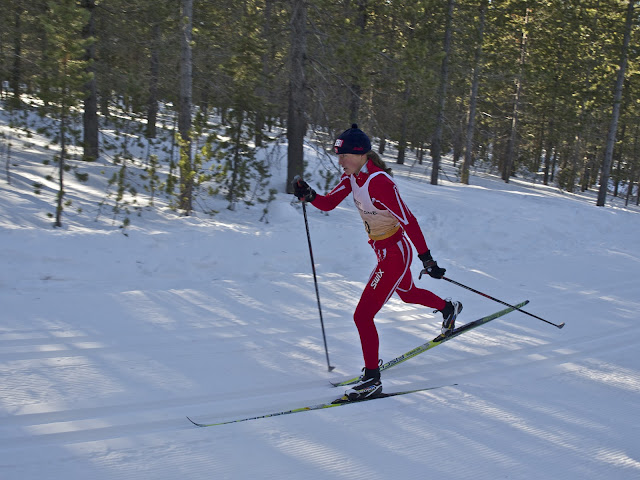 Heidi had the team’s highest result with an impressive 28th place finish.  She was the top 16 year old and the first J1 not from altitude.  We did a specific workout on the race trail a few days ago and she had a definite strategy for pacing — she nailed it and skied a strong race. 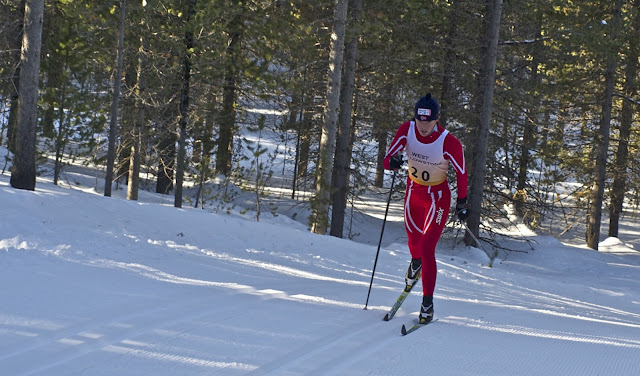 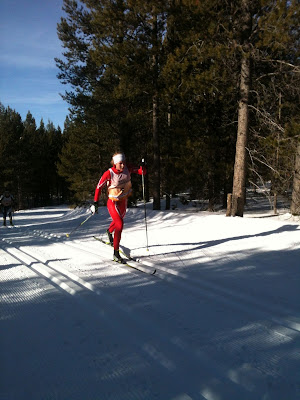 MK has been focused on technique refinements in classic and skate as she comes from a running backround.  Yesterday we had a great session on Double Pole which seems to have paid off  today.  Here she charges up the last hill in a dynamic and forward position. 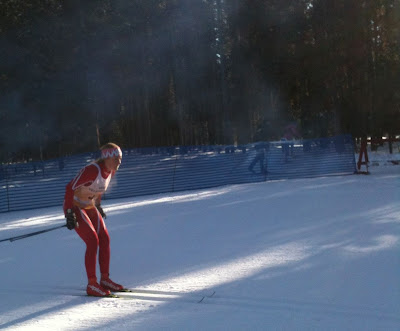 Kaitlin had an awesome effort today too!  Here she takes to the course under a cloud of smoke from the fire the starters were using to keep warm.  We’ve been working on her motions too — and we have seem to have made great strides in reducing some of the back pain she experienced last season in classic.  Her only comment at the end of the race was that she could have gone out harder because she still had some left in the tank at the end — a great problem for sure! 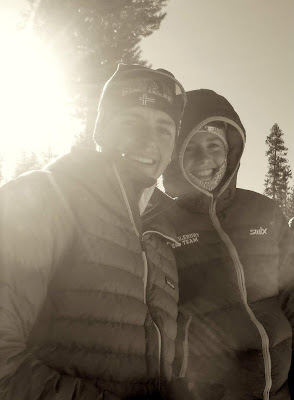 Hans took the day off today and helped with wax testing, cheering, and taking photographs.  He is recovering from a back injury and has had a super solid training block over the last seven days — his upbeat attitude was awesome out there today — here he and Middlebury first-year Heather Mooney cheer in the bright sun on Telemark Hill. 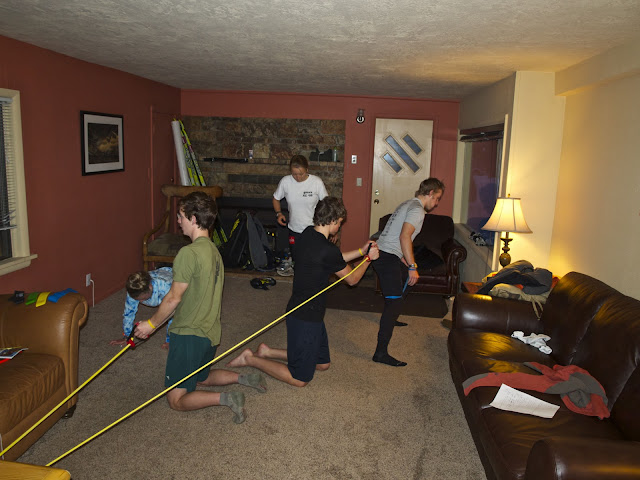 We’ve created a great mobile strength routine which will appear on the blog and fasterskier over the coming weeks.  Evan and I have been working with Brie Pike-Sprenger, a former DPT for the Women’s US Ski Team Speed Team.  She has extensive knowledge in rehabilitation and preventative exercises and a huge asset to the team. 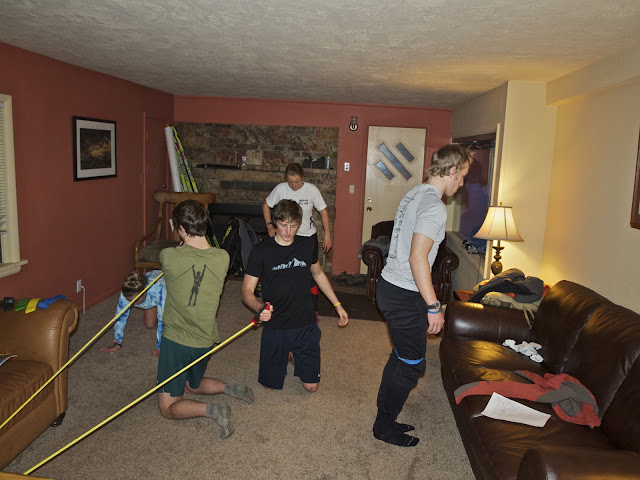 Tomorrow is a much needed day off and we are going to take a team van ride to see some sights outside of West! 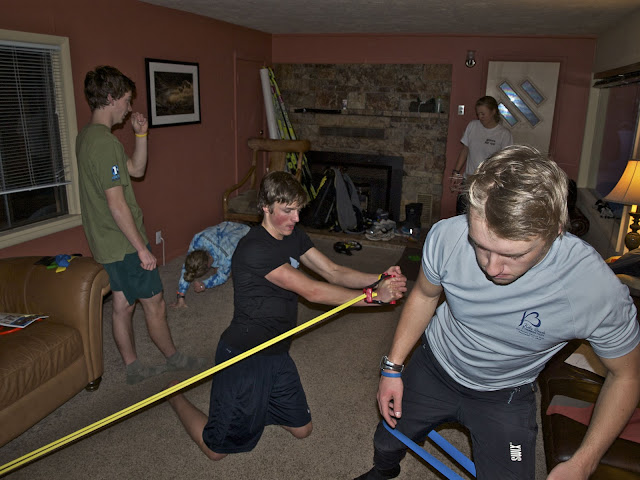