Holly BrooksDecember 24, 2011
Last night (and for the past 48+ hours) I watched a movie because the Internet crashed in the entire Ramsau Valley.  I couldn’t get much work done or respond to all my unanswered emails but it wasn’t for lack of trying, that’s for sure!  So…  I finally allowed myself to enjoy “Water for Elephants” a movie about the Circus and really, life on the road or better yet, a train. I had to laugh because afterwards, I realized that a friend of mine had referred to the World Cup as the “White Circus.”  Ever since she brought the term up, It’s been surfacing everywhere. (Funny how that always works, isn’t it?) 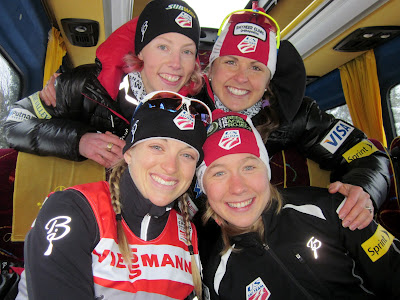 The girls squad competing in Rogla, Slovenia
While we don’t have acrobats, lions, tiger, and an elephant named Rosie (if you’ve seen the movie you know what I mean) we do travel like vagabonds and spend a lot of time on the road.  The athletes, the mondo Norwegian wax truck, the blow-up WC Craft arch, the entourage of massage therapists, sports psychologists, wax techs, and VW vans full of skis bounce from one end of Europe to the other, unpacking and repacking every weekend in a different locale. People are good at opening up the show and closing it down when it’s time to leave and move on.  As for my road trip with the White Circus? Well, it looks as though my original 6-week stint in Europe has turned into much more – potentially even an entire World Cup season. 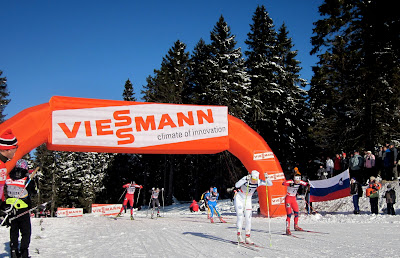 Ida kickin some butt and scoring her first legit World Cup points!
Throughout the past training season (April-November) I was worried about the 2011-2012 season.  Without an Olympic Games or World Championships to qualify for and race in, what in the world was I going to do?  I had a couple different brainstorms up my sleeve but the plan has morphed into Plan A+ or better than I had expected.  Where shall I race this season? Why, the World Cup of course!  Months ago my coach at APU, Erik Flora, told me: “Train hard, train well and good things will happen to you. Opportunities will present themselves.”  He was right.  Here I am in Ramsau, Austria, spending Christmas and getting ready to compete in my first Tour de Ski!!!!!  But more on that later… REWIND!
In the Rogla press conference last week the women’s sprint winner, Maiken Casperson Falla stated that she couldn’t wait to go home because “they had been on the road since December 2nd” and it was “hard.”  To that I say: “Try five months on the road!” 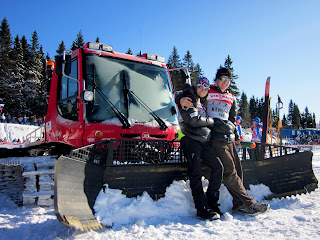 Liz and the Hoff chillin on the Pisten Bully, Rogla Stadium
North Americans definitely have the proximity disadvantage when it comes to being a Cross Country World Cup ski racer.  From Alaska it takes close to 36 hours of travel to get to Europe and another 8+ days to “acclimate” to the ten hour time difference and feel like my body was in a place where it could perform well.  Realistically, any trip “home for a break” would take me a week to adjust to home, then another week upon my return here.  Maybe that is an unrealistic amount of time if I’m chasing points and trying to improve my world rank??? 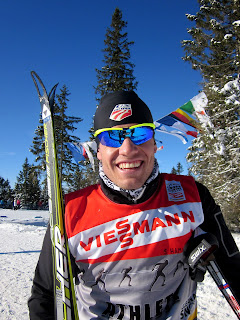 Simi after a great sprint in Rogla – qualified 7th, finished 10th!!!!
What I’ve realized, through intimate realization is that living on the road and the “lifestyle” of the White Circus is a true skill; one that takes a long time to perfect.  Our team moves and makes decisions as a group; there is no “I” in we.  With limited transportation options and resources, compromise and working together is the name of the game.
Rest and rejuvenation is an essential skill: how can one make a new hotel room every couple of days “homey?”  Some of you may be envious of not having to cook for yourself (ever) but it can be tiring to eat from endless buffets or sit through another 2-hour three course lunch when all you want is a peanut butter and jelly sandwich – on your own clock.  Speaking of peanut butter, it’s only available in select countries and certain stores. Your eyes have to scan at least 356 kinds of preserves, 87 kinds of honey and 34 varieties of nutella to potentially find a lone jar of the good stuff. Then, once you find it, you’d better buy a bunch, save it, cherish it, and make sure it doesn’t get lost in the bowels of the cargo van – you never know when the next opportunity to purchase it will be.  Being a traveler requires proactive planning you see! 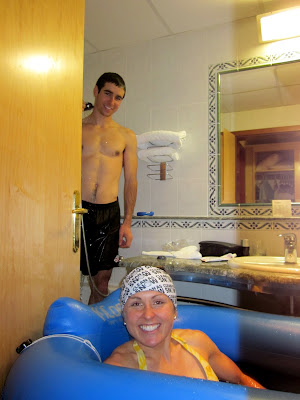 Noah and I using the “contrast bath”…… one minute in the blow up cold tub, the other person in a warm shower, then switch. (x4!)
The Internet is a topic in and of itself.  I could write a book on my frustrations with this form of communication and my hours spent trying to get online embarrassingly outweigh my winter training log hours.  The Internet in many ways is my only true lifeline to family, friends, coaches, the US, Washington, and Alaska.  I don’t have a phone that works in Europe – I can’t place or receive calls.  So when the Internet doesn’t work, which is about 1/2 of the time, I feel like my limbs have been cut off.  Lame, I know. It’s not the end of the world to read a book instead but with Christmas just a couple days away, numerous plane tickets to buy for the next period, and countless emails to write, this is a problem. 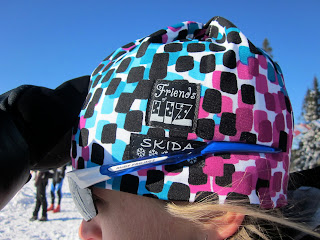 “Friends of Liz” are good people….
While technology frustrations are endless and I love peanut butter which is hard to find, the White Circus is well worth the buffet lines and occasional frustration.  As a relative World Cup novice I am experiencing “firsts” on a daily basis.  New countries I’ve checked off my list so far this trip include Austria, Slovenia & Switzerland.  Next are Italy, Czech, Poland, Russia (if my complicated VISA comes through!) & Estonia.  The travel from place to place is so swift that I find once I have finally learned the basics of one language: “Hello, Please, Thank You, Good bye” we’re already moving onto another place altogether! 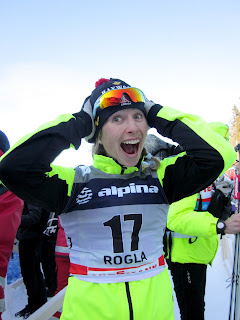 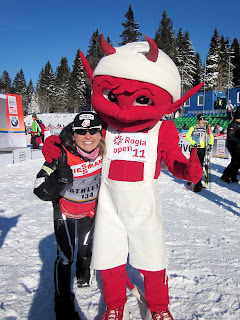 Me in Rogla!
Thinking ahead, knowing what to expect, but also having the ability to be flexible is SO important when you are living your life out of a duffel bag.  In terms of spontaneity, I try to find small, spontaneous & novel things that add to my travel experiences here.  My best example, by far, is the local, organic milk vending machine that we found while out on a run in Slovenia.  One can buy reusable plastic or glass milk bottles from a vending machine and fill them up from a “milk spicket.”  The milk shack is stand-alone and when you step up to purchase milk, or even to examine what in the heck is going on, the lights turn on and soothing music starts to play.  I decided fresh milk was a must – and I had to get one of the glass milk jars in honor all of my friends (and family!) that have any association with Williams College.  (For those that don’t know, the Williams Ski team competes in purple spandex cow suits.)  Check out pictures from this small adventure here: 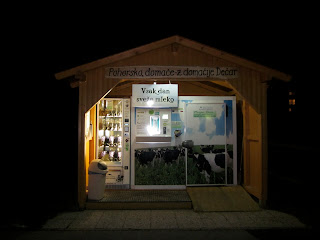 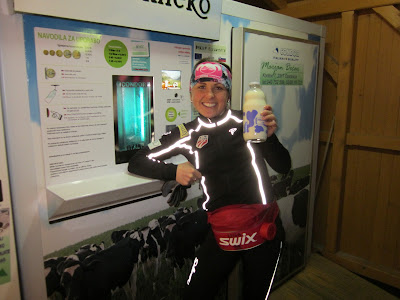 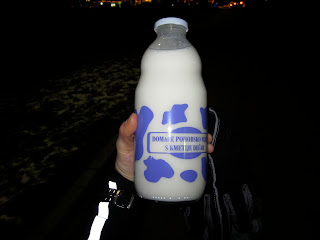