Taylor Fletcher - UpdatesDecember 19, 2011
So I am finally getting recovered from a weak of racing. It is now time for the holiday break and I couldn’t be more excited with my results for the first period of competitions.

With not the best jumping this last week, I proved you don’t you don’t have to jump amazing to get podiums. I am very happy with my form in the cross country side. I can go into every race now, knowing I can push the pace very hard, and make up some spots with strong finishes.

COC #3- First international win
After strong races Friday and Saturday, I was very confident going into these next couple races. After the jumping portion and being almost 20 seconds closer to the leader, I knew right away I had a very good chance of getting my first Continental Cup victory.

Starting out, all I wanted to do was go out controlled and smooth. I knew that was going to be the smartest thing to do, now that it was the third race in three days. After a very fast but controlled first lap, I felt amazing due to the amazing skis I had. I then went into the next couple laps trying to pick up the pace with each lap and pick off each group of skiers. On the third lap, I had made it up to the lead group and decided to try and go straight by them. When I caught them and went straight by them, I was waiting for the sound of skis and poles to get closer and end up right behind me. It wasn’t till a couple hundred meters later, that I realized I had opened up a good size gap and decided to go for the win right away.

For me to get my first win the way I did was fantastic! Skiing two whole laps on my own and keeping my time advantage all the way to the finish was nice, since it allowed me to celebrate going into the finishing line!

COC #4- 2nd Place
Coming off my first win and a day off, I was really excited to go and try for another win. After a better day on the jumping hill, I was closer to the lead and knew I had a very good chance.  Right away I was in the lead group and trying to push the pace like Sunday. One of the Germans and I had broke away from the group, and opened up a large gap to third place. On the last lap I went as hard as I could to break away, I was only successful in getting 4 to 5 seconds. Going into the stadium I was going as hard as I could, but Mark had very fast skis in the stadium and was able to close the gap making it a sprint for the finish. I did try as hard as possible for my first sprint finish victory, but wasn’t able to over take him, putting me in 2nd place!

I was really happy with the start of the season! With some time off and jump training, I feel like I will be in very good form going in to the next set of competitions in Schonach, Germany and Chaux Neuve, France. My main goal while I am there will be trying to secure another spot on world cup. With that, I will need to be in the top 30 multiple days, which is something I know I can do! 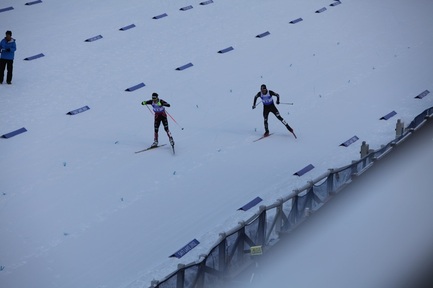