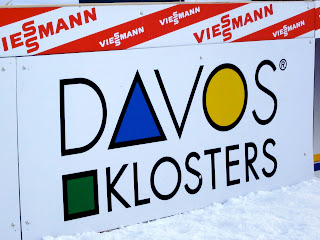 We’re currently speeding away, the opposite direction of Davos, headed to Rogla, Slovenia for the upcoming weekend’s World Cup races.  So far we’ve spent what seems like ½ of Austria in a series of tunnels, the last of which was 15 kilometers long.  I’ve always heard about the amazing transportation feats accomplished over here and yes, I must admit, I am impressed.  The other day I heard a rumor about a Russian business man who wants to build a tunnel from Russia to Alaska and you know what, I wouldn’t put it past them (in a non Sarah Palin way of course!) 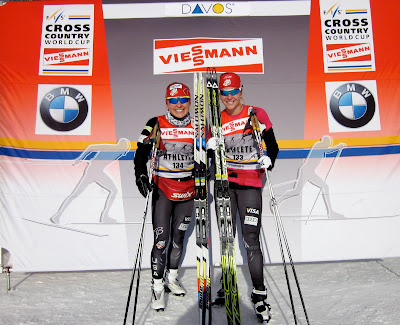 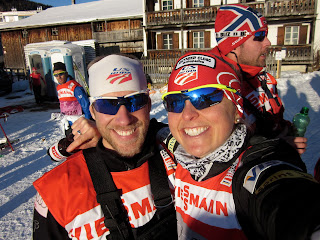 Casey’s been my tax tech for World Cup period 1 and he’s been doing an awesome job – thanks Casey for all the hard work and fast boards!
But back to Davos. I had an awesome weekend of races, one that by far surpassed my personal expectations.  In Saturday’s distance race I began getting splits that I was leading the race – and I thought they were wrong. On Sunday, when I qualified 18th for the sprint heats, I expected to get “bumped out” by later starters.  While I was far from winnig the race on Saturday I experienced a World Cup best and on Sunday, I qualified and participated in my first European World Cup sprint heat! 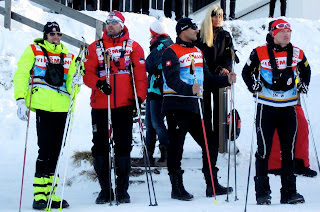 Coaches from four different countries ready to go at the “broken pole coaches zone”
I won’t belabor all the boring details of each race but there are a few things worth noting. First, I love skiing on real snow, and I love racing at altitude!  Altitude can be incredibly deceiving because it actually has a horrible “race feel.”  For those that can drive manual transmission cars, I liken it to driving on the highway in third gear when you should undoubtably be in fifth.  You feel like you should be going faster, you know you can, but the car is stuck – and won’t shift.  Perhaps you could force it but then you run the chance of ending up as that car on the side of the highway mountain pass smoking in the ditch as all the other cars speed by thinking, “Geez! Look at that sorry soul!”  After crossing the finish line in second place the stadium announcer interviewed me and asked for my impression of the course. I think I said something like, “I loved it – you have to go as fast as you possibly can without going too fast!”  At the completion of the race I finished a World Cup best of 13th place, only 5 seconds down to 10th.  It’s my nature to always want more (that tenth place!) but I forced myself to be patient, and to be satisfied with the result that I turned in. 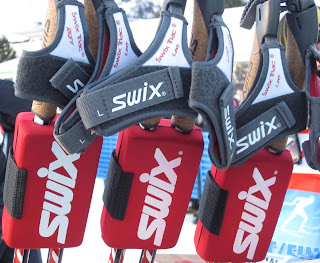 Podium poles, ready to go!
After each World Cup race we receive a “competition analysis.”  This analysis is complete with each intermediate split and ranks each section of the course and how you skied it compared to the rest of the field.  I had some sections that were as good as 6th or 7th place overall and my last two, I really tanked it at 35th place!  While I couldn’t hold my pace the entire time, I took a risk and skied the race at a pace that I would ideally like to hold. My coach Erik, and I have talked about this as I have tanked races before, going out too hard and they dying in the end.  He’s always been encouraging and said to me, “Someday Holly, you will go out fast and be able to hold onto the pace – and THAT, will be a good race!” 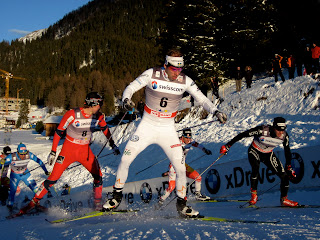 Picture from Men’s race…
Coming off the high of my World Cup best on Saturday, Sunday I was determined to qualify for the heats.  The sprint course was unique in that the Davos course is a two-lap race. Its one of the only courses where the men and women compete on the same distance.  Going into it, I knew that the course fit my strengths and I was hoping for a good day. And a good day it was! Even after a few fumbles I crossed the line in 18th!  On top of that, Kikkan, my teammate at APU won the sprint qualifier, a feat that she’s never accomplished despite her list of World Cup victories! 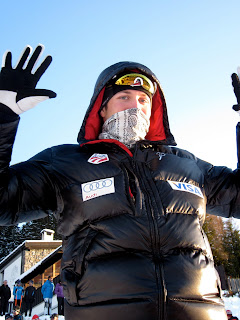 Fun to finally meet Skyler Davis!
Once heats were sorted out I found out that I would be racing the quarterfinal with none other than Olympic and World Champion, Norway’s Marit Bjorgen.  Also in my heat were my Canadian friends, Chandra Crawford and Perianne Jones.  Both Chandra and Peri joined us up in Alaska this past summer for the first annual “NAWTA Camp” or the “North American Women’s Training Alliance Camp.” The camp included one week of skiing on APU’s Eagle Glacier where we got the chance to work together and race around the top of the glacier head-to-head! 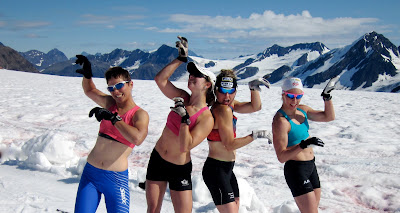 Training on APU’s Eagle Glacier earlier this summer – USA & Canada!
Before starting we had a quick North-American “power-pound” and lined up for the gun. I reminded myself, this is just like the glacier! J Skate sprint starts now consist of a short double pole before you are allowed to skate.  The tracks are short, allowing for little to no time to spread the field. Consequently, Bjorgen and I started next to each other and upon exiting the track, almost took each other out.  Unfortunately I missed some key steps and was forced into a position near the back of the group.  Unfortunately I wasn’t quite fast enough to move onto the next heat but the race was SO MUCH FUN. I couldn’t be disappointed. At the end I didn’t even feel tired. Instead, it was some kind of weird euphoria that left me wishing and wanting to try it again!  But, the day was over for me and my consolation prize was a prime spot on the course to take photos and watch Kikkan absolutely destroy the rest of the women’s field! 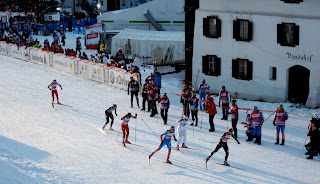 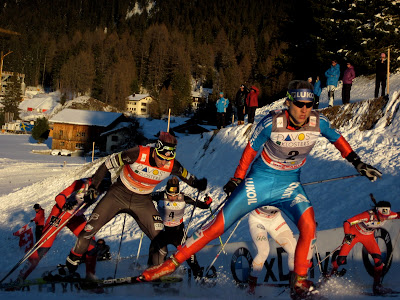 Kikkan in the final, lap one
A happy coach
In all of this I keep returning to the same theme: Confidence and Interface or aka, “Opportunity.”  It’s priceless to know that we CAN compete with these girls and each weekend of head-to-head racing I learn something new and get better. Now that’s not to say my results will continue to improve each and every weekend. (A bad day on the World Cup can easily result in a 70th place finish.)  If that were the case, I’d be winning World Cup races come February. I am optimistic by nature and don’t believe in putting limitations on dreams but I don’t think that will be happening – not quite yet at least!
That’s it for now – time to get settled into Rogla.
Have a great week, take care of yourself, and find a reason to be thankful for all life’s blessings! (There are so many!)
Sincerely,
Holly 🙂 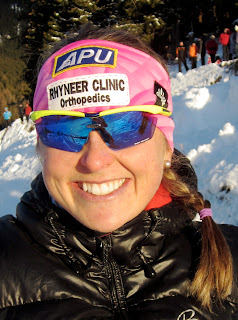 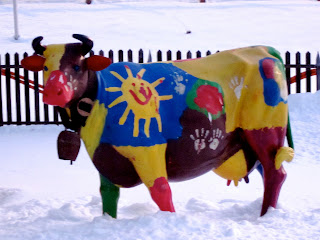