The only sure way to know, of course, is to wait a few weeks and see what happens when she gets to Europe. But there’s been some commentary from the peanut gallery about how dominant Diggins has been on the domestic circuit so far.

This is one of those problems that FIS points are supposed to solve, but no sane person actually believes that they do. In an ideal world, you could simply look at the FIS points for Diggins’ domestic races and compare them directly to the World Cup field. But we all know that doesn’t work so well.

My preferred method for making comparisons like this is to isolate comparisons between specific groups of skiers when they race against each other head to head. In this instance, I’d like to compare Diggins to the other three top American women Randall, Brooks and Stephen. If we took Diggins’ results and transfered them to the World Cup, how would they compare to the strong races these three ladies have had?

For the cleanest comparison possible, we’ll restrict ourselves only to interval start distance races. What I’ve done is a little hard to explain clearly, even though it’s fairly simple. here’s the deal: 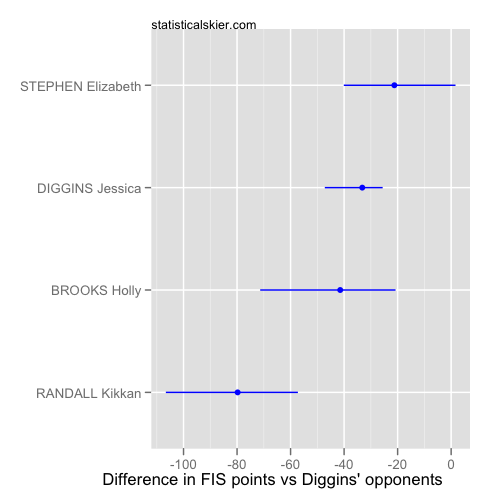 This graph shows the median and middle 50% of those differences for each skier. Negative values indicate that skier did better than Diggins’ Opponents.

Not surprisingly, Randall tended to fare the best. The degree to which Diggins has “crushed” the domestic field so far this season falls somewhere in between Brooks and Stephen, but definitely a bit behind Randall. I think this is fairly strong evidence that Diggins may very well be skiing no worse than Liz Stephen right now, which would easily plant her in the top 30.

There are two big caveats. First, I think you’d have to subtract a bit given that she’s less acclimated to the travel and general commotion of the WC scene, but you never know. Second, it’s entirely plausible that at least Randall and Brooks (and possibly Stephen) are skiing considerably better now than they were last season. Since they’ve been in Europe so far this season, they haven’t raced against Diggins’ Opponents yet this year, so I only have last years races to go on.

The end result here is that I wouldn’t be surprised at all to see Diggins in the 30′s. Between 20-30 would be an excellent day, but not shocking. And anything in the 15th or better zone would be approaching “race of her life” (thus far) territory.