I was skimming FasterSkier’s write-up of the Tour de Ski prologue yesterday and noted their comment about how Liz Stephen “… is generally stronger over longer distances, performing better in 10k’s than 5k’s and even better still in 15k’s.”

That has been my informal impression as well, but I was suddenly skeptical about whether her actual results would bear that out as clearly as you might think. Specifically, I started wondering whether this may be a situation where how you measure results has an impact on how we perceive their quality. For instance, here are her WC level distance races, filtered down to only 5, 10, 15 and 30 km distances, measured by finishing place: 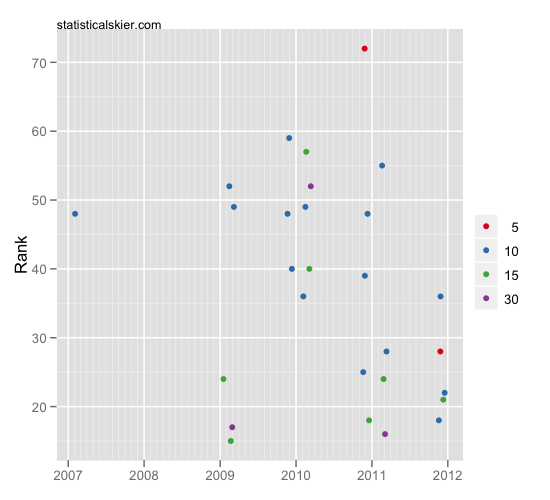 In 2009, longer distances were definitely better. Then things looked kind of mixed in 2010 (generally an off year), before returning to normal in 2011. So far this season, this look fairly mixed again, although with only a single race over 10k.

However, the longer races (15k/30k) are usually mass start or pursuit races. They can sometimes have smaller field sizes and are often paced much slower. (Although I think the difference is probably not as pronounced with the women as it is with the men.) If we look at the percent behind the median skier, which corrects for some of the differences between interval and mass start races, we get this: 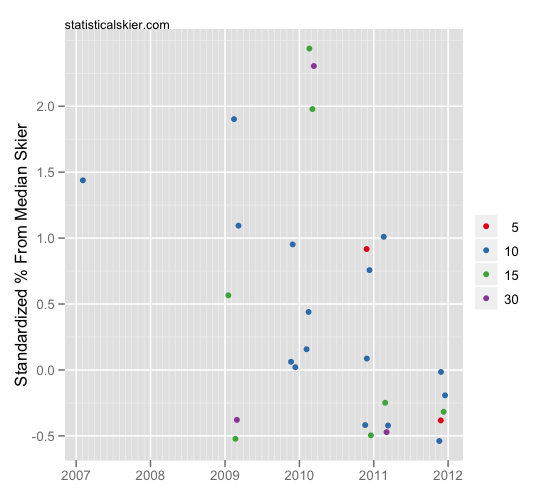 Things look the same for 2009: noticeably better at the longer distances. Now, though, 2010 doesn’t look “mixed”. Rather, it seems she skied quite a bit better that year in the 10k’s (again, having a generally off year). But then both 2011 and 2012 look fairly mixed to me, with some good races at several different distances.

So I think her results have displayed a modest tendency to be stronger in longer distances, but not quite as much as you might think by looking only at her finishing place.