Riding the cable car up, up, up high into the high Austrian air to the Dachstein Glacier for the first time, I get the feeling Garrison Keillor echoes on his News from Lake Wobegon when he says “All the women are strong, all the men are good looking, and all the children are above average.” Packed six tight into the tiny aluminum tin, you can’t help but look around and think all the young women around you are strong and good-looking and above average. Here, though, this isn’t some Lake Wobegon effect – our universal, natural tendency to overestimate one’s capabilities. Rather on that first ride up to the Dachstein Glacier, you know this is the big leagues. For good reason. Standing shoulder to shoulder to Axel Teichmann, Timmy Tschanke, or Justyna Kowalczyk, one gets the very real sense they are no longer skiing in the sandlot.

As a sometime writer, mornings begin with my mind wondering off to write stories about the people I meet. One morning it’s about the fifteen-year-old Finnish girl with her father and the improbably tall Thomas Algaard. It’s then when it hits me: the three of us – all of us, really – are writing our own unique chapters to the same book on our love affair with skiing. That same morning, the clouds and the setting and the sunrise are just perfect. Fortunately, I have my Canon G9 camera tucked away in the backpack with the change of clothes, Bartlett pear and thermos full of chalky chocolate flavored recovery drink. I snap the picture and send it off to the world.

When I get back to the hotel just over two hours later, former American World Cupper Dan Simoneau (World Cup Best: 2nd; 7th 1983 World Cup Overall) has left a message. Simoneau’s terse prose reads like poetry. “Great photo, Torin. I’m jealous that you are skiing on snow that has so many drops of gold medal sweat. Rub it well. Throw some over your shoulder. Burn some to the Gods. But most importantly, melt it with hard work, focus, and determination. I believe.” Reading these words the first time sends a shiver down my spine. I know what Dan says is true.

I’ve been to the area many times before, though only in the heart of winter. The Ramsau trails wind through valley, canyon and race loops from the 1999 World Championships for a total of 180 kilometers. I could easily work for the town’s media department: I wouldn’t trade one day of skiing Ramsau for anywhere else.

And yet somehow, coming to Ramsau in October is even more special. Maybe it’s because for most, October is the toughest time of the training year. You are still putting in big hours. You are a little sick of the dryland. There really isn’t any good or consistent skiing yet. As a racer you have the itch – and a little bit of anxious anticipation – to get on with the season, and visit with those friends for whom you only seem to meet up with along the trails.

Getting into Ramsau, I flew to Munich then took the train to a tiny town in Germany where I meet up with Swiss National Teamers Mauro Gruber, Eligious Tambornino, and Martin Jaeger, sprint specialists all. Over the next two weeks, I will meet up with the Swiss athletes from time to time, though rarely for the same on-snow workout. This can be chalked up to the sweet science of cross-country ski training. The Swiss athlete’s are in specific race sharpening training for the race season’s start, coming in two week’s time. The Swiss athletes also don’t believe in doing anything except low intensity long distance training on the glacier, due to its altitude 2700M (8,370ft). Instead, they distance ski in the mornings on Dachstein, then do intensity or strength or speed in the valley below. What they miss out on in real-snow feel they feel they make up in spades with the faster movements of speedy Marwe rollerskis with the low resistance zero wheels. 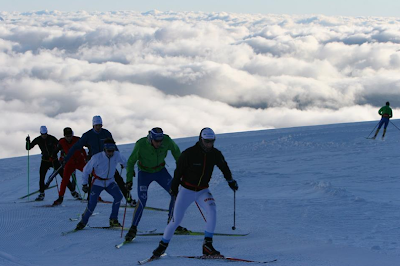 For Ramsau, I’m joining up with a Norwegian team comprised from the seven small towns that border the hills around Lillehammer. These Norwegians from Team Sjusjoen are more distance-oriented and believe in getting on-snow twice a day. Unlike the Swiss or the Germans, they believe in the trade-off of doing controlled threshold intensity at this high altitude. Most days I ski with the young up-and-comer Simen Sveen. You haven’t heard of him before, but you will soon enough. As a twenty-two year old in med school, Simen was 3rd in the Norwegian Cup Series and 4th at the Norwegian National 50 kilometer.

Simen’s motivation is the kind you rarely see. The young up and comer has just tasted success. He can only see himself getting better and achieving more in the ski tracks. The longer someone can keep this feeling burning bright inside their emotional engine can say more than technique or tactics or V02 max test scores. Right now, all are headed up, up, up for Mr. Simen. It is a wordless spectacle in itself. Like all extreme but perishable actions, watching skier find their inspiration, excites the writer. It also burnishes his instinct to bear witness.

It’s not altoghether different than slide down the window on the cable car, sticking your head out into the cold alpine air and breathe in the oxygen, the sights, and the opportunities that lie ahead for you. If you have the chance to ski the Dachstein, take it. Your love affair with skiing will only go stronger. Just remember that in this little corner of the world all the women really are strong, all the men are good looking, and all the children are above average.

Jennifer Caldwell to be Remembered Saturday