An esteemed reported asked me to report back on whether the Norwegian women’s dominant display so far this season is unprecedented. There are numerous different directions one could take that question, mainly having to do with how you choose to measure their dominance.

But we’ve got to pick something, so let’s measure the number of top ten results over the first six races of a season (excluding stage overall results; so just individual races). The short answer is that no, this isn’t technically unprecedented: 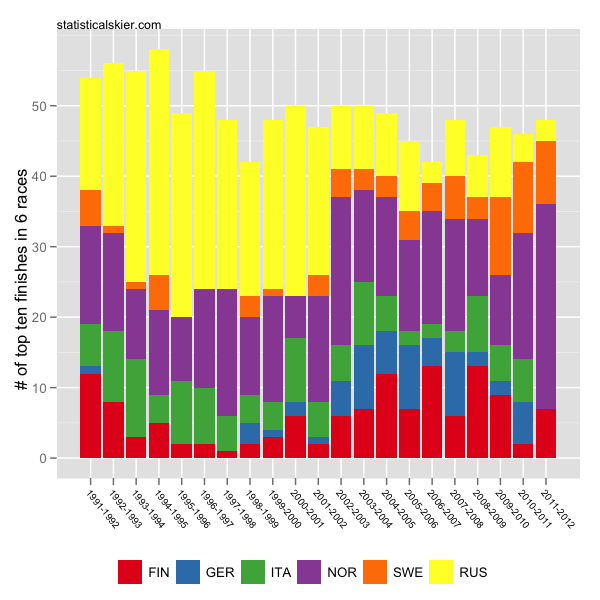 Apologies for the somewhat garish colors.

Over the first six races of a season, there are obviously 60 top ten spots to fight over, so you can see that I’ve omitted some of smaller nations. As you can see, the Norwegian women have by far the most top ten results of any nation this season, by a country mile. But the Russian women of the early to mid-90′s were fairly comparable. (Of course, at least some of those ladies were not always on the up-and-up.)

Counting something like this is a little trickier than it seems. For my purposes, I’m going to exclude overall stage race results, and only look at isolated single day events.

Another problem is that many times only the qualification round results are reported to FIS for sprints, so that’s all I have. So I’m going to omit those races, knowing that it will make this slightly inaccurate, but I can’t really do anything about that.

Somewhat more controversially, I’m going to exclude the handful of sprint qualifiers held in the US recently where the elimination heats were never actually run. That way we can get Gelso’s streak up to 5 in a row. Also, I just think those races are kind of dumb and I’d like to pretend they don’t exist.

There were 30 folks with streaks of 3 in a row, and then several hundred with 2 in a row. I haven’t checked, but I’d be willing to bet that 5/6 consecutive races in 4th hasn’t ever happened either.