Housekeeping note: Posting may be a tad delayed and/or sporadic this weekend and into the beginning of next week since the Statistical Family has increased in size by 50%.

I’ve engaged in a bit of speculation about the likelihood that Kikkan Randall may be able to win the WC Sprint overall title this coming season. My general take was that while it’s certainly possible, it will require a rather dramatic improvement in her classic sprinting.

Obviously, Kikkan’s racing so far has cast some doubt on whatever skepticism I had. (If you have doubt in one’s own skepticism, what would that be called…?) It’s still early, but if she’s going to win the whole thing, this is how she’d need to start her season.

In any case, it certainly seems like she should be more or less a lock for the top three, given all the retirements that have thinned the ranks of the women’s field. How well will she have to do, exactly, to match her performance from last year? Well, given the changes from year to year in WC scheduling and rule changes in how points are awarded, it’s not possible to directly use previous year’s point totals as a guide. However, if we convert them to proportions of the total number of points awarded for the season, things are easier to handle. 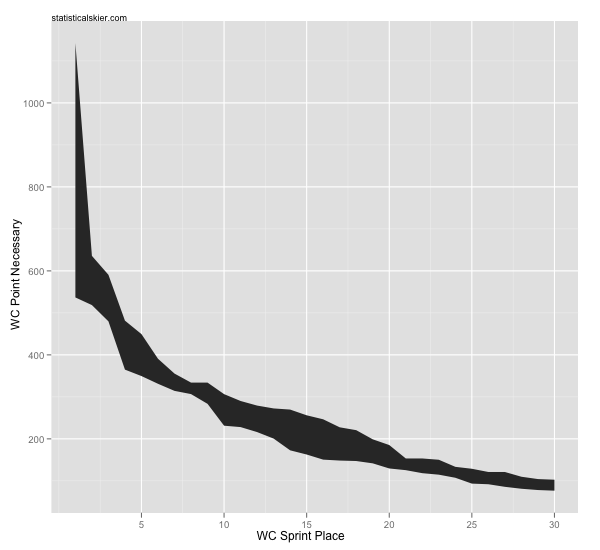 This chart shows the range of points necessary to finish at a particular place in the WC sprint overall rankings for the women. It’s based on taking the proportion of WC sprint points awarded to women in previous years, and then converting back to the equivalent proportion of points on tap for the 2011-2012 season.

Based on this, it seems like it ought to take a minimum of 528 WC sprint points for Randall to have a decent shot at landing on the podium, and she has 240 already.

As you can see, when you hit the top spot things get very unpredictable. Occasionally you have someone completely dominate and they win a really large percentage of the WC points. But if someone shoots for 600, that’s probably a good place to aim for if you’re trying to win the whole thing. So that would mean Kikkan’s looking at possibly having to win 4 more (non Tour) sprints to put herself solidly in the running for the overall win. Obviously, she can accumulate those points without having to win every time, but thinking about it in terms of wins is convenient.

Scott and Niederhauser Inducted to Canadian Ski Hall of Fame

A Note on North American Ski Fandom: Why Do You Cheer?