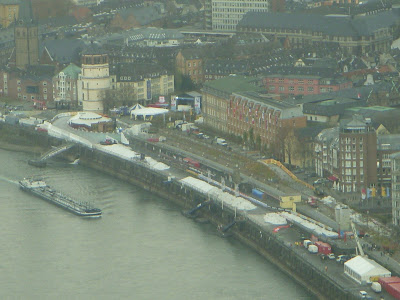 FIS WORLD CUP NORDIC CITY SPRINT. December 2, 2011. Dusseldorf, Germany. On the eve of this year’s first, inner-city Nordic World Cup Sprint event, the world’s best cross country skiers have assembled in this beautiful, historic German city. Having never visited Dusseldorf, my only awareness of this amazing city was as the fictitious target of allied airstrikes-on-ball-bearing-factories in Hogan’s Hero episodes I watched religiously as a kid. Flying in from Oslo, we discovered that not only does this city produce many key components to keep the economic engine of Europe up and running, it’s a culturally rich and diverse city, filled with interesting architecture, history and amazing vistas. River barges over a thousand feet long trundle up and down the Rhine River constantly, transporting virtually every imaginable finished product and/or raw material. It’s fun to guess what kind of car the captain has stashed on his deck, immediately behind his wheelhouse, before each barge lumbers by. Audis, BMWs, Mercedes, Harley-Davidsons… hmmm. Note to self: Riverboat captain: Apparently not a bad career choice! Question: How do they get these cars onto the dry land once the barge has anchored? Ramps? Cranes? Huge German car claws? Auf du liber! However they do it, I am sure it would be fun to watch.

Strolling down from our hotel to the FIS World Cup Sprint site we viewed a really interesting cross section of Dusseldorf culture. Despite Hogan’s best efforts the city was not leveled during World War II, so there are plenty of really cool, centuries-old buildings mixed in with post 2000 architecture. One of the more impressive buildings that dominates the skyline is Germany’s version of the Seattle sky needle, the Dusseldorf Sky Tower / aka “Panorama”. The ticket seller at the base of this bad boy will try to up-sell you schnitzel and café, but when travelling on a budget, skip the snacks and take the lift up to the top for a mere, ear popping three Euros. It’s well worth the wide mouthed yawns to enjoy the breath taking views from the top. Although it’s two hundred feet lower than the Prudential Building in Boston, at 557 feet, Dusseldorf’s Panorama Tower affords viewers a pretty awesome view of the Rhineland and beyond. For thrill-seeking, wanna-be, base jumpers, the best part of the design is the angled windows. Wanna rush? Once you’ve made it to the observation deck, walk at a fast pace right up to the edge of the windows and quickly look down. Definitely worth the price of admission! You’ll be gazing beyond your feet, 557 feet straight down to the motherland below. Thank-you angled window-designers!

In a snowless city (continent?) the FIS World Cup site is clearly visible from the top of the tower. The huge, pure white, piles of snow, stockpiled for the Pisten Bullies to push around tonight, stand out from the course-side river, verdant green grass and surrounding multi-hued buildings of the city. Organizers did a great job blowing and stockpiling tons of snow for the event in a nearby indoor warehouse-sized facility. They trucked acres of the white stuff onto the site and it’s heaped in huge mounds prior to tomorrow’s event. It’s quite a process and despite the warm weather, they’ve killed the potential for melt with amount. If you make sufficient tons of the stuff, it’s not going anywhere overnight.

With unseasonably warm temperatures this year, snow is an incredibly scarce commodity across the entire European continent. Having spent the previous few days in Norway, it’s great to see snow, even if it’s manmade, here in Germany in the first few days of December. Two hours by plane to the north, Oslo is currently, downright balmy. The grass is green, jackets are optional and it wasn’t until we drove three hours north of Oslo to the resort town of Beitostolen that we saw any indication of snow. We gamely joined (obstructed?) a group of Norwegian World Cup skiers who were doing their best to hammer out enthusiastic kilometers on a short training loop at the (would-have-been-if-we-didn’t-cancel-it-and-relocated–it to-Sjusjoen ) 2011 World Cup site. Pretty sparse conditions, but sufficient to prepare for racing around in the streets of Dusseldorf. Editor’s note: We ended up on the same flight as many of these same athletes en route to compete in Dusseldorf. (“Yo, Captain Olaf. Don’t screw up this flight. You’ve got the entire Norwegian World Cup Sprint team on your plane. If it’s not too much trouble, please don’t crash!”)

Hours away from start time tomorrow morning, the site is a beehive of activity. Trucks are delivering snow, groomers laying down corduroy; workers are hustling around with shovels and rakes as security guards maintain the perimeter. “Achtung! Eingang verboten!!!” Thousands of fans from all corners of the globe will be on site cheering on their favorite racers tomorrow. Three Vermont / NENSA skiers are entered in the field. Among the 72 male racers are three skiers from the USA: Andy Newell, (start # 15), Simi Hamilton (start # 35) and Skyler Davis (start # 66). 56 Women will start tomorrow. For the USA women: Kikkan Randall (start # 1), Ida Sargent (start # 29), Sadie Bjornsen (start # 35) and Holly Brooks (start # 38). Good-luck to TEAM USA athletes when they toe the line tomorrow in downtown Dusseldorf for the FIS Sprint World Cup Nordic races! Check out the action by googling Dusseldorf Sprint World Cup or live on: http://www.sportlemon.tv/

Thanks to Pete Davis for sending this in!

Good luck team to team USA and to Skyler in his first World Cup race!

The Greater World of Ostersund