Holly BrooksDecember 1, 2011
I’m behind on my blog posts but what can I say? My senses have been completely overwhelmed with Swiss scenery, 1k, 2k & 3k man-made loops of snow (this morning we did 30 looks of an 800 meter track) and new varieties of stinky cheese!  So far, so much of my European skiing experience has been concentrated around Scandinavia and it’s been a while (try 1998) since I’ve been to Central Europe! 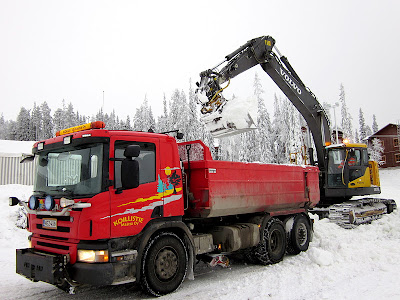 Big machinery has been making skiing in Europe happen…. dum trucks, back hoes, snow guns, etc
But, to rewind to last weekend – the Ruka Triple!  Racing the mini-tour in Ruka (outside Kuusamo, Finland) way, way, way up north…. check it out on a map here ….. was an absolute blast.  I had a semi non-spectacular start to me World Cup season in Sjujsoen and was looking to clock a more satisfying result. Because really, shouldn’t 3 x 25 hours of summer glacier skiing and giving up endless backpacking trips and late nights equate athletic improvement? Ideally, yes!  And thankfully, my results (and improvements) from last weekend made it all worth it.  Now the hard part comes: Can I do it again?!
If you’re not a Nordic skiing junkie, (which not everyone is!) you may be thinking, what happened? What did she do? Well, the Ruka Triple consists of three days of back-to-back races with cumulative results.  Think Tour de France but Nordic skiing style in Lapland. First of all, I kicked off the day with a World Cup WORST. The first race was a classic sprint and I was horrible. I was 70th place!  I almost fell on a huge downhill leaving the stadium and the conditions were ice-hard and squirrely, my least favorite.  Anyways, I figured that it had to get better from there and it did!
The following day I had my best World Cup result ever, 17th place!  I was so fired up!  I was one of the earlier finishers (Thanks to Friday’s poor result) so I had time to hike over to the large hill to watch the top seeded girls attack the finish.  While I don’t know what I looked like skiing up the final decent many of the girls looked surprisingly unspectacular.   I was literally holding my breath as the results flashed by on the huge megatron, 9 skiers at a time.  I made the second “screen flash” and finished EIGHT seconds out of tenth place! 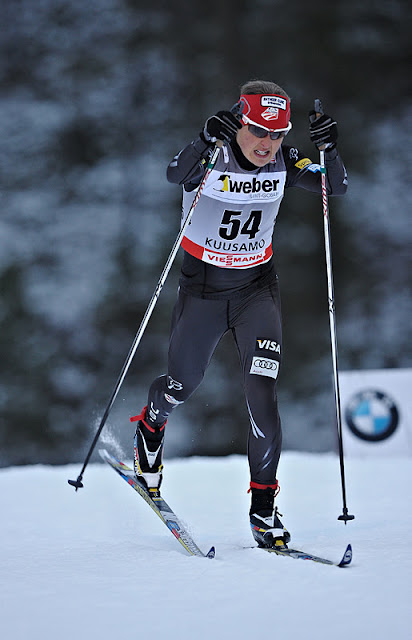 A picture of me racing the sprint – compliments of Nordic Focus
This race was certainly a breakthrough for me.  The crazy part it that it felt like a decent race but if you were to ask me how it went at the end without telling me I would say, “Okay.”  But here’s the important part, I went for it, received a promising result and consequently, gained a MONUMENTAL boost of confidence.  Thank you so much to many of you who have sent congratulatory emails and written on my face book wall!  One email, in particular, really hit home for me.  The email was concise and really hit the nail on the head.  This accomplished athlete said, “Yeah!  Good job 🙂  A little confidence goes a long way. Often times that’s all that separates you 🙂”  And you know what? This is so true! Once you’ve done it once, it becomes real. It becomes a possibility each time you toe the line.  Now that I’ve been top twenty once I know that on a great day, I can be top twenty again. No, not every time.  Competition here on the World Cup is tough and as I was quoted saying, “It’s amazing how here, a bad day can be REALLY bad.  For example, take 1 second to wipe the snot off your face and you lose two places.  Lesson learned: don’t wipe the snot off your face!”
What have I learned? As a country I think we can do this.  We simply need more interface and more confidence.  Yes, cross country skiers in Europe are on milk cartons, some drive sports cars, and it’s not unusual to see one of our competitors on the cover of a tabloid.  But, Kikkan has shown that she can beat them and I learned last weekend that I can be in there.
My very first college coach, Eli Brown had this theory…. it went something like this: I beat such and such once and they beat this other person – and the other person won an Olympic Gold Medal.  Therefore, I can win an Olympic Gold Medal!  Well….. It doesn’t quite work that way but I think there are some good lessons to be taken from such a statement.  If I can be top twenty on the World Cup so can many other girls in the US.  Caitlin is an amazing skate climber, Jennie Bender can double pole like a crazy women, Kate Fitz can ski “threshold” till the sun goes down and Digger ski races until she cries (literally – DURING races) and I believe that Sadie Bjornsen to this day holds the 100m World Record!  As a nation we are tough, we have talent.  Now we need the opportunity and just a pinch of confidence!  Watch out World!  Team USA is coming on strong!
In the meantime, here are some pics from Ruka: 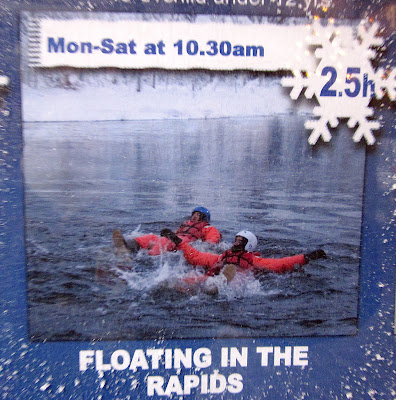 This is absolutely INSANE. For only 80 Euros you can float down a river in the middle of winter for TWO and a HALF hours. WOW. 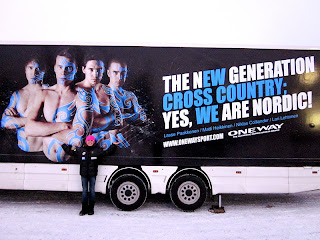 Saying hi to the Finnish boys…. 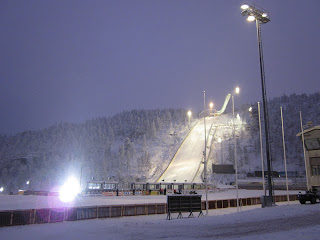 The Ruka Jump – at night 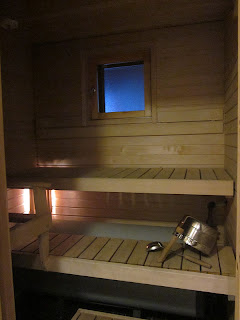 Finns love their saunas.  This was in our room – and took up a lot of square footage… unfortunately we didn’t have a great opportunity to use it with all the racing on the schedule. 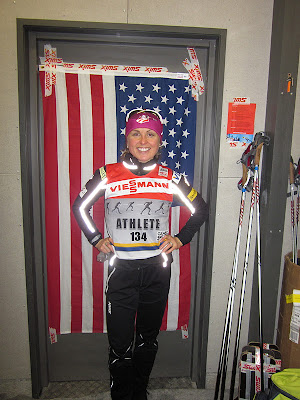 In the wax room, in front of the flag! 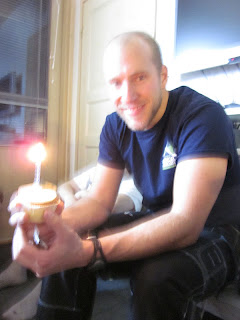 We celebrated Casey’s B-Day in Ruka! 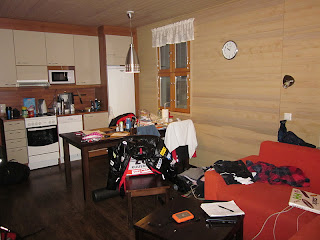 I absolutely love Ruka. Maybe it’s the fact that I’m from Alaska and the darkness doesn’t bother me but I loved staying in small apartments literally overlooking the course.  Although we were on a meal plan here we had the opportunity to do laundry (which is rare) make hot drinks, and put food in a fridge!  It was glorious. 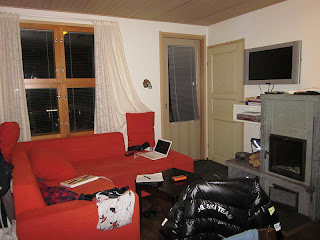 Here’s the view the other way.  On Thanksgiving we celebrated with a FIRE! 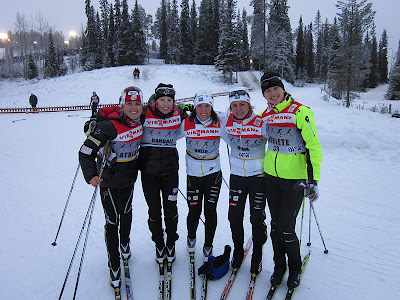 Here we are after the the last race… left to right: Me, Kikkan, Charlotte Kalla, Anna Haag & Chandra! 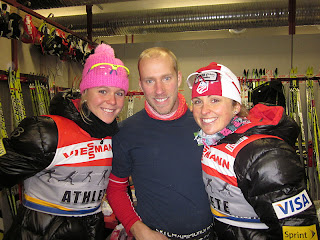 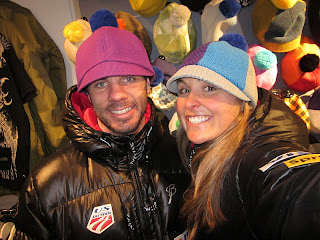 Trying on some funny hats with Lars! 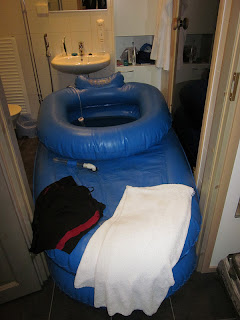 The “World Cup Version” of the Alaskan packraft. This is a portable cold tub that fits in a backpack – used for recovery. 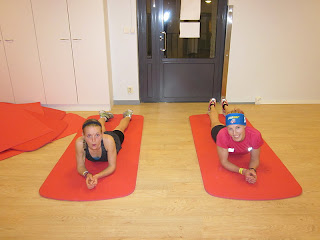 Liz and Kikkan making it a Ruka QUADRUPLE! We went to lift after the third race….. 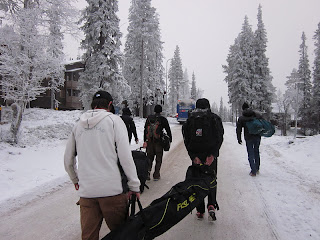 Hauling our stuff up to the World Cup transit bus….. Bye Ruka!
Thanks for reading 🙂
Holly