I just got home from some sprint racing at the Sovereign Lakes Nordic Center, one of my favorite race venues. This weekend was a classic sprint and 15km classic distance race. Following last weekend’s lackluster finishes in Bozeman I was anxious to improve my standings. I had gotten in a good amount of rest and a few solid intensity sessions while home, and was feeling ready to sprint.

We arrived at Silver Star on Thursday night – me, Scott, Alison and Nikki. It’s always fun to have a group to travel with, even though it often just means more people twiddling quietly on their laptops at the same time in the condo…

Previewing the course on Friday I saw it had changed dramatically since the last time I raced at Sovereign. What had previously been a relatively flat, fast 1200m sprint course had become a 1600m course with two legitimate climbs interspersed. I was excited because it meant you wouldn’t be able to sneak by just double-poling on skate skis in the classic sprint. While I feel pretty strong at double pole I’ve always thought if you’re going to hold a classic sprint, there should be striding involved. As it turned out come race morning, the snow was fast enough that much of the course was a double pole anyway, but it definitely necessitated some striding over the tops of hills. I conducted a much better warm-up this week and qualified 9th. It was another step forward in the race progression this fall and I was excited to see what the heats held, as they were to be the first of the season.

I got slotted into the fifth quarterfinal alongside Mike Sinnott and four Canadians. Mike’s a strong sprinter and qualified well so I decided to tag onto him through the heat. Out of the start I felt great and quickly moved into second alongside Mike; once or twice a Canadian would pull up alongside or even in front of me but I quickly regained position to secure my spot. The final climb of the course led into a 90 degree turn then into a short 20m straight shot over a bridge before dropping into a steep left-hand 270 degree downhill corner which led into the finish stretch. Coming across the bridge we were three-abreast and I pushed hard to take the corner in second, blocking out the third man. Mike and I came out of the corner in the lead and double-poled away for a small gap and moved on to the semis. 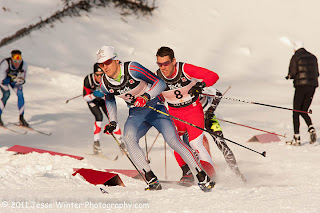 Rounding the final corner into the finish stretch during the quarterfinal. Photo courtesy Jesse Winter.
I knew I had spent most of my chips in the quarterfinal. We’re still in the building process of my anaerobic endurance and while I would’ve liked to think I could repeat that effort for the semis and final, it didn’t seem likely. My semi started much the same as the previous heat and I scrambled to keep position in the center of the pack. I held on well through most of the long climb in the middle of the course but then started to feel the tie-up in my legs. I dropped about 5m off the pack up the final climb to the bridge and slowed up, knowing I wouldn’t catch the lead three and wanting to save my energy for the B final.

The B went much the same way as the semi; I had a little kick until the end of the long climb, then I was exhausted. I trailed the group across the finish line in 6th, 12th overall. I wasn’t too proud of falling off the pack in the last two heats but my effort was better than my previous sprints this season and I could tell the fitness is still improving. Next weekend’s skate sprint in Rossland should be another step forward, and I’ll look forward to taking that speed all the way through the finals.

For now, there’s good, fast skiing in the Methow and I’m going out to train. Happy Monday!