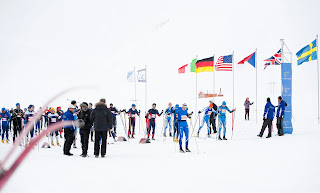 In April Dave and I skied the Fossavatn 50k race in Iceland. Minnesota Trails Magazine asked us to write articles and submit photos for the winter edition featuring the Skinny Ski Series. We dutifully sent in our stuff but since the Series is not happening this year they didn’t get published. Dave’s article focused on the race and the editor asked me to focus more on the experience around the race so here’s my article. I would highly recommend this race experience to all ski adventurers out there. Check out this video of the race: http://www.youtube.com/watch?v=nWVIci3PdRE

Dave and I were joined by Dave’s wife, Paula, and my dear, longtime friend from our Austin, Texas years, Martha FitzSimon. Thank you, Paula and Martha for the awesome race support!!!
The Fossavatn Ski Marathon began in 1935 as a 20K race and has since added 7K, 10K and 50K distances, all classic. It is a small race in terms of number of participants (approximately 300) yet it attracts an international field and occasionally some of the best skiers in the world (past winners have included Oskar Svärd and Suzanne Nyström, both Swedish Vasaloppet champions and World and Olympic champion, Thomas Alsgaard).

The intimacy of the race is further bolstered by its setting in a small fjord town. Ísafjörður is tucked in the remote West Fjords region, an 8,500 square mile peninsula in the north we
st corner of Iceland with a population density of less than 1 person/square mile!
If you arrive in Ísafjörður by noon on Thursday
you can attend the master class lead by one of the international guests. Imagine getting a personal critique by a former world champion!
On Friday a bus takes visitors to the venue to preview the course. I was struck by the unique beauty of this sparse land. There is no vegetation but plenty of hills and mountain plateaus. Imagine the moon with snow. From a single vantage point we could see much of the 50k course.Despite being literally a few miles 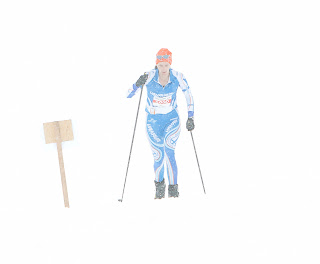 from the Arctic Circle the temperature never gets very cold, but that doesn’t mean weather can’t be severe. The winds can be brutal although, mercifully, we had almost no wind this year but we did have a heavy fog. Because it’s nearly always above freezing for the race the locals are good at selecting and applying klister (whereas we cold weather racers from the Midwest US are hard wax experts). Knowing that getting good kick could be tricky we brought lots of klister but to cover our bases Atomic Ski rep Henry Wisnewski also sent ‘zero’ waxless skis for Dave and I. Since it snowed several inches the night before the race and we weren’t sure what to expect at the higher elevations on the course, we elected to go with the zeros.
The locals successfully opted for klister so I think both were working that day.
Towards the end of the first half is the first of two long climbs in the race. Checking my heart rate monitor altimeter after wards I learned that it was 45 minutes of continuous up. About 20K later is the second big climb. This one is shorter but steeper and unlike the first climb there is a reward at the top: a 7K downhill run to the finish line! So even though my thighs and triceps were protesting with spasms, I enthusiastically ‘ran’ up the hill and thoroughly enjoyed the ride down to the finish line.
After crossing the line each skier is given the traditional post-race treat: A little blue bag with a bun and a hunk of chocolate. We lingered a bit to pose for pictures and talk to fellow skiers but we needed to hustle down mountain because there were celebrations waiting in Ísafjörður.
The cake feed and awards ceremony at the high school gym is amazing. I think nearly every family and bakery in town brings a Scandinavian treat. Hungary skiers and their friends and family load up plates with more pastries than I could count, most of which I’d never tried before! I took small portions because the servers kept replacing empty trays with something brand new and I wanted to make sure I left room for seconds………OK, thirds. 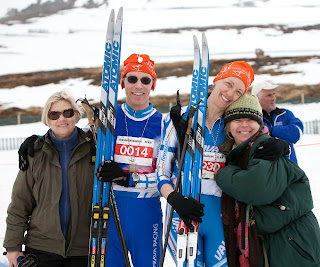 After a couple of hours to digest we dressed up and headed to the cultural center for a late night of food, drinks, entertainment and dancing with fellow skiers from Iceland, the US and Europe. Local talent included a magician, a jazz band and a rock band.
The Fossavatn marked the end of a long but fun ski season that included the Skinny Ski Series, Birkie and Masters World Cup. Now, on April 30 I completed my last and longest race of the year and I could not think of any better way to mark the occasion than to celebrate with friends in a beautiful, remote, vibrant village in Iceland.