We just wrapped up a successful trip to US Nationals in Rumford, and are back in Waitsfield recovering and preparing for the next thing coming down the pike. But before we put Nationals in the rearview we should recap the week that was. And what a week it was! 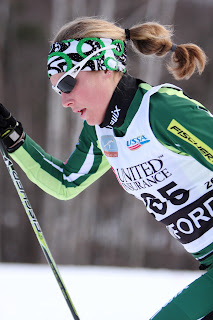 We started with a skate sprint, delayed a day because of rain the night before the original date. Undeterred by the delay, Heidi, MK, Fitzy, and Dev all posted strong qualifying times. Heidi and MK each earned spots in the junior heats and finished 6th and 21st, respectively. Both Dev and Heidi ended up as the 8th J1 skier for the day, a great accomplishment for both of them!

GMVS alumnus Tim Reynolds advanced through the heats, but his day was ended by an unfortunate fall at the end of his semifinal. Nonetheless, he skied to 12th place overall on the day.

Next up was the open skate race: 10 km for women, 15 km for men. Heidi was once again the 8th J1, as well as being the 16th junior. MK was not far behind, coming across the line as the 27th junior, and Fitzy skied a great race, finishing in the middle of the field. Dev didn’t feel like he had his best race, but skied four hard laps (4 times up High School Hill!) and finished as the 22nd J1. Alums Tim Reynolds and Peter Kling were right in the mix, finishing 20th and 22nd, respectively.

The third race of the week was a classic distance race, and by this time everyone was beginning to get a little tired. The fatigue did not show in the results, however, with MK grabbing the 16th junior slot in the 5 km classic. Heidi suffered a fall but still hung on to 21st, and Kaitlin skied another strong race and finished 69th. Alum Kristin Halvorsen got her first racing of the season and skied well to 51st place. On the men’s side, alum and Dartmouth sophomore David Sinclair skied his best race of the championships and was only 9.3 seconds out of the victory in 4th place. Devlin finished up his first nationals with another solid performance, ending up as the 25th J1and 57th overall for juniors.

The men skied 30 kilometers, nine laps around, and nine times up High School Hill. Tim Reynolds and Peter Kling were undeterred, skiing with the lead pack for much of the race. Reynolds finished 15th, less than a minute off the podium. Kling hung on to the pack for as long as he could, and ended up in 30th.

The final race of the week was the classic sprint. Heidi qualified for the heats with a 29th place finish in the qualifier, and skied a great quarterfinal, finishing in 5th, right behind a pack of skiers led by Jessie Diggins! Her result was good for 25th overall, 3rd J1, and 6th junior on the day. MK qualified for the junior heats and skied a great semifinal, overcoming two skiers in the final stretch to move on to the final. Trying to execute the same game plan in the final, MK got boxed out settled for 4th place. An excellent result after she was disappointed by the results of the skate sprint heats.

Alums Tim Reynolds and Peter Kling once again did their alma mater proud, finishing 10th and 24th in the sprint heats. David Sinclair was 9th place in the junior heats.

It was a furious week of racing in Rumford, and we had some excellent results. Heidi qualified for the J1 Scandinavian trip, and will be heading overseas later this winter. Congratulations! The rest of us skied hard the whole week and are now recovering with some great distance skiing at Trapps, where the snow is better than anywhere else in New England!