FasterSkierJanuary 20, 2012
Wow – been a while since a blog post. Somewhat embarrassingly, I brought a camera with me on this racing tour but have neglected to take many photos. And without photos a blog can get boring pretty darn quick. So I haven’t posted much. Here’s a recap:
After Nationals (high points: 5th in skate qualifier, 13th in 15km skate), Dakota BVJ and I traveled to Green Mountain Valley School to enjoy the hospitality of GMVS coach Justin Beckwith. There wasn’t really any snow to be had in the East with the exception of a few choice nooks, and Trapps’s Family Lodge was one of those nooks. GMVS is about 45min away from Trapp’s so we were situated well to get some training in during the off week. 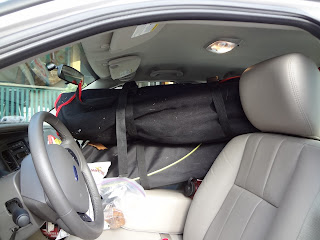 The interior of the Crown Vic was jam-packed with our gear. Apparently they were not manufactured with ski racers in mind… 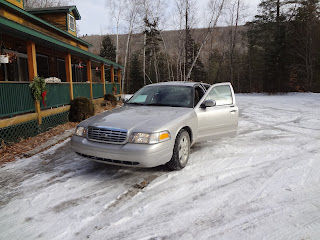 My transport for two weeks. I had a lot of folks hitting the brakes and pulling over for me as I masqueraded as the 5-0 all over Maine…
The skiing at Trapp’s was really quite good, considering that everywhere else was abysmal. One day, Dakota and I joined in as guest coaches for a local Waitsfield, VT area junior program. We led them through some sprint drills and explosive double poling; they were pretty fired up to go head-to-head with us.
Following GMVS we journeyed seven hours through an Eastern blizzard BACK to Maine, this time farther north from Rumford to Readfield, ME, where we would lodge for three nights with Bruce and Sandy Hunter while racing the Eastern Cups in nearby Farmington. The Hunters’ son Andy was an ’04 at Dartmouth and ski team captain my sophomore year. They were amazingly hospitable and it definitely made a huge difference to have delicious home-cooked meals and warm beds in between cold races!
The Farmington races were put together in somewhat dire circumstances. A lack of snow forced the organizers to move Saturday’s sprint to the distance race venue, an alpine area and its base trails. The sprint itself was almost dead-flat, a sure-bet double pole on skate skis. After qualifying 4th I stunk it up pretty bad in the heats, falling back to 9th in the finals. Not a good day. Dakota redeemed our crew by winning the day and a tidy $500 cash prize.
The next day’s 12km skate was a mind-wrenching 8 laps of a 1.7km course heading straight up the bunny slope of the alpine area for a minute or two before zipping back down and around the sprint course. Each lap took about 3:40min and there was almost 200 men on course. Quite a cluster, to be sure. I fared much better on that day, finishing 5th overall, 8 seconds out of some cash money and 3rd place.
Dakota and I finished our Eastern tour in Boston, where we gorged on an all-you-can-eat $15 Chinese/Japanese (their description, not ours) buffet in a strip mall. Surprisingly, it was both a) delicious, and b) digestible. I can’t say I’ve ever escaped an Asian all-you-can-eat buffet without at least a minor case of food poisoning; not only did I not get sick, it was all-you-can-eat SUSHI – prepared right there in front of us so I could actually see the uncontaminated fish being sliced. Very worthwhile.
I’m in the Twin Cities now. More updates to come.

The Post-Grad Trip to Scandinavia

First Tracks at the Nordic Center