Holly BrooksJanuary 7, 2012
Oh Italy….. I am finally back in connectivity after no Internet for days. There is a theory that Internet is especially sparse in Italy due to some Mafia thing but that has yet to be confirmed.  Alas, my apologies for those of you that have checked back only to find my blog without recent updates.  It’s been out of my control, for sure! (This also creates a huge back log in correspondence so if I haven’t written you back yet, this is why!) 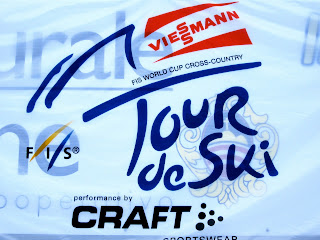 This afternoon we have our second to last race of the Tour, a 10k classic mass start race at Val di Fiemme. I will make this post brief because I need to get ready but I really want to get something up to let you all know what has been going on. 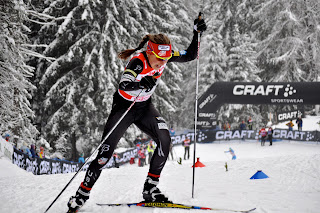 Racing in Toblach….
As I’m sure some of you have seen or read in other publications, I took a slip on the ice Christmas day while running in Ramsau, Austria.  It’s taken a while to get a proper diagnosis…. this has included lots of fitful reading on wikipedia, Web MD, and all of those other scary Internet sources where you diagnose yourself and then continue to have nightmares…. However, I was finally able to get both an x-ray and MRI, mid-tour in Oberstdorf, Germany.  We were able to deal with an Orthopedic specialist but lots of the medical lingo was lost in translation and there was a fair amount of uncertainty- plus, we were literally trying to get on the road to arrive at the next stage of the Tour. It was quite a debacle of a day but  more on that later. 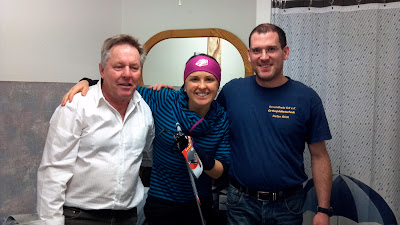 These nice men, Herbert and Stephan made me a custom cast which is hard on one side, and soft on the other side.  They were even nice enough to do this for FREE! I am extremely grateful for their kindness – and was happy to hook them up with an Oberstdorf race bib 🙂 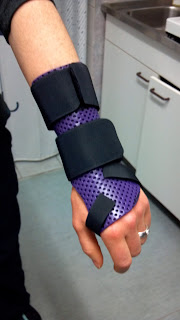 I have been told usually Drs would put a non-removable cast on for six weeks….instead I have this awesome removable, cleanable cast! 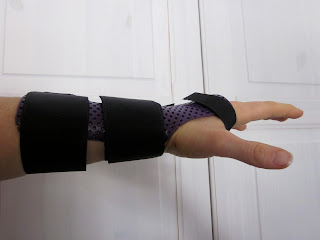 Hard on top, soft on the bottom
The conclusion from the MRI is/was that I have a non-dislocated fracture of the distal radius bone.  They were initially worried about the scaphoid-lunate ligament as well but that appears to be okay which is terrific news. 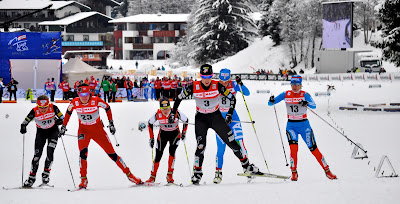 I was happy & surprised to make the sprint heats in Toblach. Everything was going well until I got tripped up on the last uphill…. darn!
The second I fell on the ice I knew that something was terribly wrong. My hand was extremely swollen and my range of motion was poor.  Christmas was literally 4 days before the beginning of the Tour and it was hard to know what to do.  Since then, I have been racing every day, doing my best to compete.  While my results have been extremely sub-par, I feel the need to complete the Tour. I’ve worked so hard to get here – and there are so many people who have helped me out along the way. I know there are a handful of other skiers from the US who would have loved to have the start opportunity and I feel the need to represent the US. I often wonder if the decision to keep racing is tough or just plain stupid.  I was concerned about the potential of permanent damage to my arm but have been told since that it’s probably just pro-longing my recovery period.

Here’s a good motto – from my coach Erik 🙂
Coming into the Tour my goals included fighting for a top ten stage results and finishing in the top 20 overall.  While those goals are completely out of the question now, I continue to race because each time I put a bib on, I learn something valuable. With each stage of the Tour has come another World Cup start, another experience at a new venue, and some pointers and direction towards my results here (hopefully) next year, not to mention later this season.
Also, Val di Fiemme, (where we are now) is the site of the 2013 World Championships so while I’m racing today, I will literally be trying out the course for next year’s Championships.  After yesterday’s “inspection ski” I was really psyched – I think the courses suit me well and it gives me a ton of direction for summer and fall training. 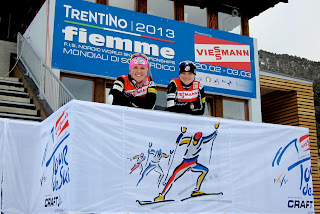 Tour de Ski here and now – World Champs next year!
I could go on and on but it’s off to lunch, then a quick view of the men’s race, time to get ready – and bring on the pain train!
I promise a more complete update with tons of pictures soon. In the meantime, THANK YOU SO MUCH TO EVERYONE WHO HAS SUPPORTED MY JOURNEY!!!! YOU ALL MEAN THE WORLD TO ME AND I WILL BE FOREVER GRATEFUL! This injury has been especially difficult in that part of me feels like I’ve let some of you down but I’ve been told that I cannot think that way… and I know I can’t.  Nonetheless, THANK YOU and I will continue to do my best to represent you all and get some stories and photos as soon as I possibly can!
Cheers!
Holly:) 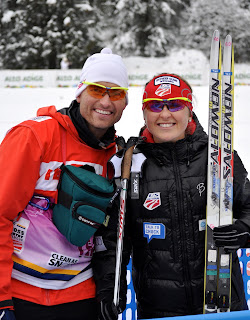 I am so happy and thankful to have Rob, my husband here with me…. he’s working with both Fasterskier and Salomon 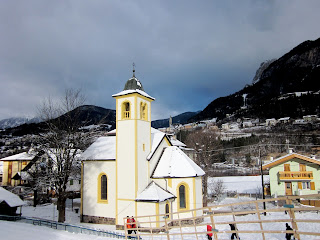 The Church at the Val di Fiemme race venue – trail side 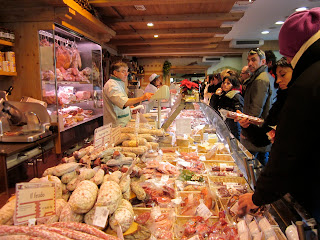 Italians lining up for all kinds of meat….. they like their salami here!