The news came when I was in the hamlet of Sjusjoen, in the hills above Lillehammer, Norway: Three Dead in Stevens Pass Avalanche

Why the appeal of affixing clinging skins, clicking into rear-heal releasing bindings and heading into the backcountry? My ITA mentor Greg Peck says this gets back to the soul of sport. And the way he says it, you know it’s true. Some of the last words Daniel Zimmerman, the closest person to me I’ve lost to winter’s fury said to me was, “We got to get up in the mountains together again (pointing to the Enchantment Range of the Cascades just above) and receive their good tidings.” 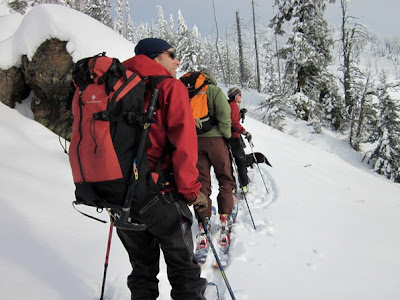 Dan leading the crew into his backyard playground.

I’ve never known another to be such a fun-hog as Dan. He had the ability to take the moment at hand and fill it to the brim with kinesthetic energy and conversation. I can see A.E. Housman penning the words that Dan, and now Chris and Jim Jack and John were the very ones able to fill the unforgiving minute with sixty seconds of distance run.

After you leave the hometown you grew up in, it’s never quite the same to come back home to. I still feel a deep connection to the valley. But the parent’s sold the house, and moved back to the city 30 miles away. More and more, I am left with memories. These mental etchings will be with well into my time as an elderly man sitting at a lunch counter ordering a ruben-and-rye at Rumplestilskin’s Delicatessen. Thanks for the memories. You are missed. Profoundly.

My connection to Chris Rudolph and Jim Jack didn’t run back to the first day my family moved to 107 Mill Street in Leavenworth. But they were great friends of friends, the kind of people you look to get to know better if you were ever able to move out of the suitcase and settle back down in the Upper Valley. The best word to describe them would be characters. This is just how the Seattle Times reporter described those caught in the February avalanche – “Residents of the small town of Leavenworth mourned the loss of three “very beloved characters” who lived and breathed Leavenworth.” Sometimes, a writer and a friend gets it just right. At Chris’s memorial, one spoke about how Chris was an amplifier of life. The following are his words:

In a parallel universe, Chris, Jim Jack, Johnny and the rest of the crew skied safely and ecstatically down to the highway. The Stevens Pass van that Chris would surely have had en route would load them up and deliver them back to the resort in ecstasy and disbelief of how epic and how easy it all was. I know this, because I’ve been on that van ride. I’ve been at the bar afterwards as we all raised a glass to Chris for facilitating this finite slice of heaven. If we could only have realized how finite it would really be.

Chris and I shared many of these beautiful moments. Skiing, celebrating, making music, working, traveling, exploring, planning and giving freely of the gift of joy. He was a man with whom I had more in common than nearly anyone else in my life. Being around him gave me the feeling that my actions and motivations in life were of the highest tier, because the same actions and motivations were his.

My perspective on this is not unique. Chris served as an amplifier of life, in full support of anything positive, brave or inspired. For the people with whom he connected, Chris was a motivator, a collaborator and a model for fully living. A life more fully and joyfully lived creates stronger bonds. My dear friend Chris Rudolph created more of these bonds with more people than anyone I can think of.

Yesterday while in the midst of living his creed, Chris was killed. When he died he was in his element; on skis, in the mountains, on his favorite run, sharing the wealth with his close friends and a crew of people experiencing the place for the first time. This was Chris Rudolph at his finest.

What Chris has left for us is a profound sense of loss that is more burdensome and acute than many of us have experienced before. But more importantly, he’s left us a guide for interacting with the world around us. We’re left with the knowledge that we have a small window of opportunity in this life to forge friendships, to inspire, to live and to love. It’s time to open the floodgates and let it all fly. It’s what Chris would do.

The Best Race of the Year