It’s been a busy two weeks since I returned home from the Twin Cities and my five-week racing trip in January. Alison picked me up at the airport in Seattle on a Monday evening, we drove home the next morning, and two days later turned around and drove to Sun Valley for the Boulder Mountain Tour. It was a whirlwind trip but I was feeling good for the race and excited for a longer mass-start race. I had gotten plenty of advice from Ian Harvey and others who’d raced the BMT before, most notably to NOT let gaps form because they rarely get closed again. I took that to heart at about 5km into the race when Liebsch and Flora nabbed a 15m gap through the first aid station. I didn’t want to miss the opportunity so I took a gamble and jumped off the main pack to give chase. It was a gradual climb up a drainage and I hammered for several minutes with no avail. I managed to bludgeon myself into submission and not gain anything on them, but at least I provided a draft for a few guys behind me who were able to ski around my bedraggled corpse when I finally gave in, and form a more controlled chase group on the leaders.

For myself, I let the main pack reel me in and then dealt with staying amidst the 5th – 15th group. We had a good train going for the remainder of the race and near the finish I pulled into no-man’s land to sprint myself to the line in 13th. I would’ve liked for better on the results sheet but I’m glad I made the (failed) move early in the race, as it gave me crucial experience on the race for coming years. And beyond that, it was a beautiful day in SV and after I finished, I got to watch my Dad race to the line, almost landing on the podium for his 60-64 age group! That certainly bested my own effort for the day…

Certainly more notable than my BMT finish however, is the new addition to our family: Eddie! 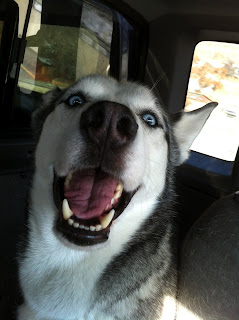 Eddie was the dog of a good friend of ours who lives in Seattle. She’s been getting very busy with work and has felt bad that Eddie wasn’t getting all of the attention he needed and asked if we could adopt him. We thought he’d be a great addition and a good friend for Nikki, so we said yes! So far, Eddie’s been great at home and is a good addition to our little mountain clan.

Oh yeah, I also got an IPhone. Booyah.

Another fun day at Trapps: classic drills and distance