Recall that at the start of the season, I considered this question with a bit of skepticism. I was definitely more skeptical about her prospects than some others. Hopeful, but skeptical.

My skepticism stemmed from the fact that while Kikkan is arguably the best freestyle sprinter in the world right now, her classic skiing has traditionally lagged a bit behind. Based on the only experience I have, which is looking at lots and lots of results patterns over time, I was skeptical that she could improve her classic sprinting that dramatically.

So what has happened so far?

First, her classic sprinting has indeed improved. She’s finished 4th, 9th and 9th in classic sprints so far this season. That compares with 10th, 17th, 21st and 42nd last season.

Second, I expected Marit Bjørgen to both contest more sprints this season and to perform better in them than she has.

Which leaves us with Kikkan sitting atop the sprint WC standings, with a 109 point lead over Natalia Matveeva in second and a 147 point lead over Justyna Kowalczyk in third. Can she hang on?

I’m guessing that this is pretty much the sole focus of her entire season right now. Kikkan was apparently ill for a few days, and then had a slightly sub-par freestyle result in Moscow. She followed that up by skipping this entire weekend in Nove Mesto. It seems pretty obvious to me that she’s simply focusing all her energy on making sure she’s firing on all cylinders for the remaining four sprint races.

In particular, next weekend’s freestyle sprint in Poland will be critical, since the season then ends with three consecutive classic sprints. If she’s going to pad her lead this will likely be her last chance to do so. Suppose everything goes to plan and she actually wins that race, but both Matveeva and Kowalczyk are also in the finals. So maybe she walks into the final three contests with a ~150 point lead over Matveeva and ~200 point lead over Kowalczyk. 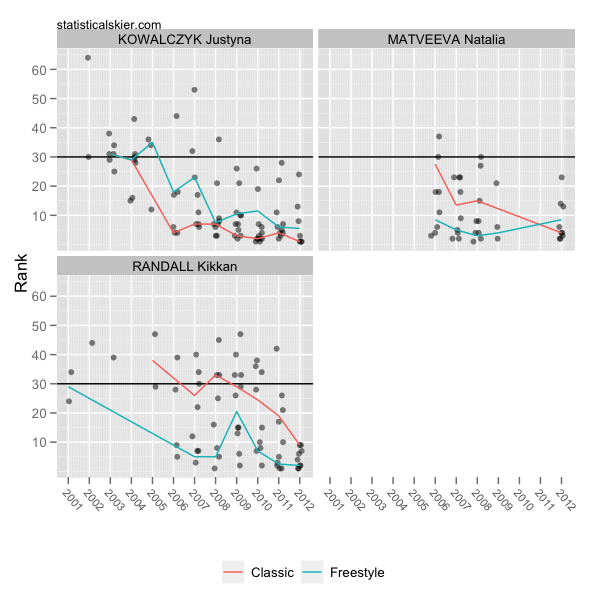 Here’s the thing. Not only are both Kowalczyk and Matveeva better than Randall at classic sprinting (generally), they themselves are better at classic than they are at freestyle. There have only been three classic sprints so far this season, and Randall has made the finals in only one of them. Matveeva has reached the finals in all three, and Kowalczyk has actually won two of them.

So while I’m sure some folks are chuckling to themselves about my skepticism, I’d argue that we don’t really know anything for sure until the final three classic sprints. This will be the real test of whether Kikkan’s classic sprinting has improved enough for her to win the overall. Will she be able to make it through to the finals in at least two of the three, which seems like it would be the bare minimum she’d need to stay in contention?

At this point I honestly have no idea. Sprinting is random enough that this could easily be decided (in either direction) simply by a crash or two.

Vegard Ulvang to Ski and Speak at Birkie (Updated)