On Sunday we traveled down to Grafton for the J2/EHS Qualifier.  After a nice cruise down Route 100, we were greeted by a sunny and fast one km loop that the kids would race around three times in classic and then skate technique.  We brought down Hans, Devlin, and Kaitlin as Heidi and MK had raced the carnival up at Trapps on Friday — we also brought Parker and Noah as they were looking for some race experience. 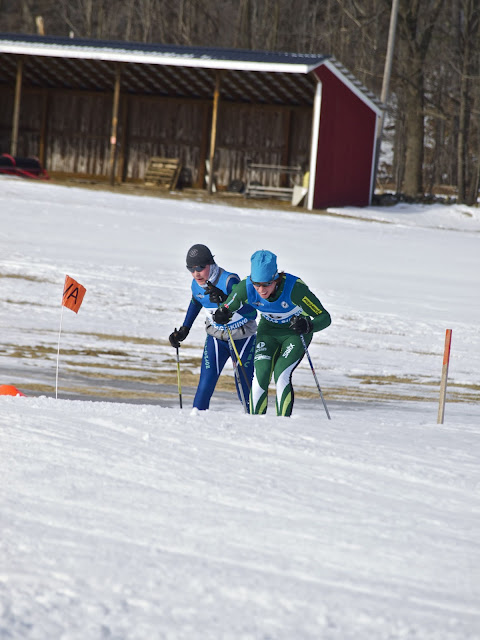 The tracks were nice and the snow was frozen granular, little bb like pellets that turned into sugar throughout the day.  A lot of folks were using klister, but two sets of my hardwax/binder skis were working better in this manmade and super transformed snow.  I’ve tried the binder trick several times to no avail in these conditions, but it was certainly working this day.  Of course you need to be able to kick well to make it work.  For those who could, their skis were quite a bit faster than those on klister. 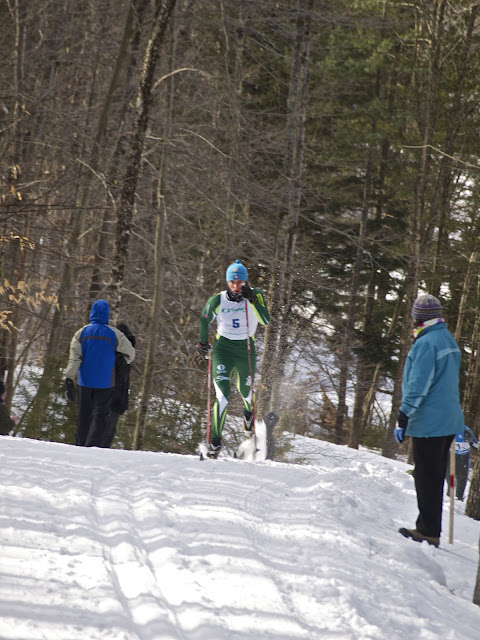 Hans is improving with every effort right now and he took the victory in the classic race, a full 24 seconds ahead of the field. 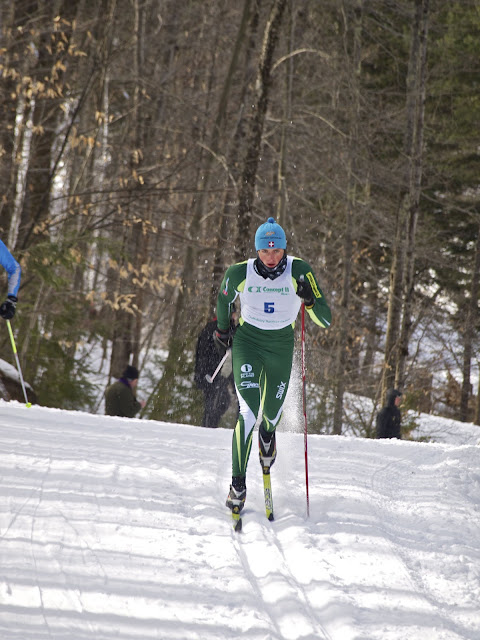 We were working on pacing and staying relaxed in motions and in breathing.  He went out very hard and had fast first and third laps, the middle one still a place to improve as he struggled a bit with the intensity of the first lap. 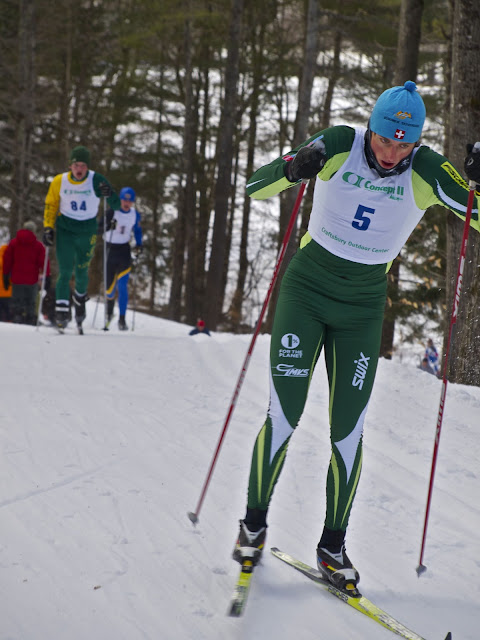 Dev also skied fast, but caught up with a “snow snake” on one of the track changes — this bumped him down to 6th. 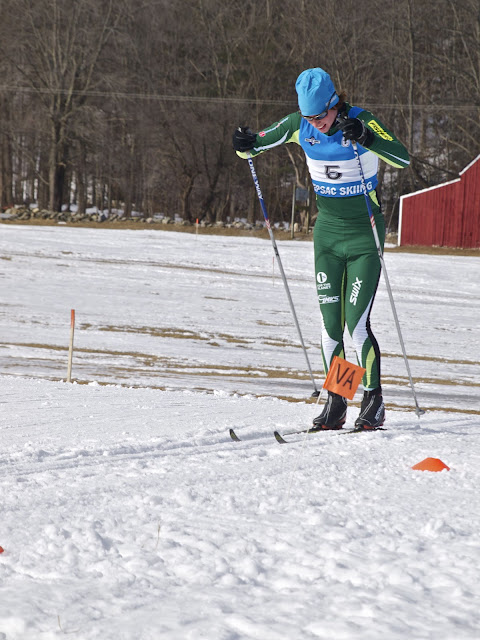 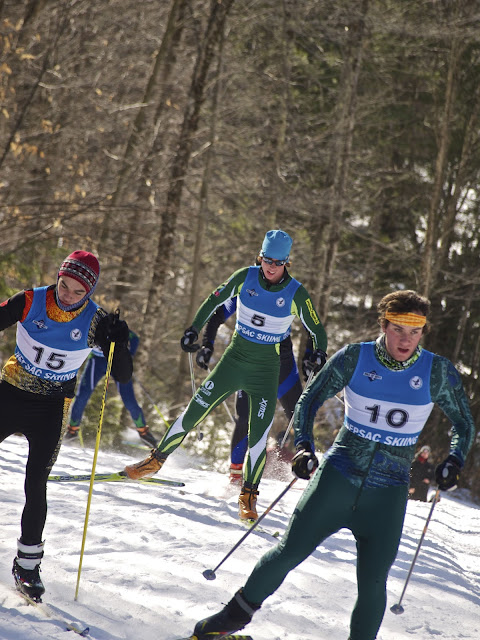 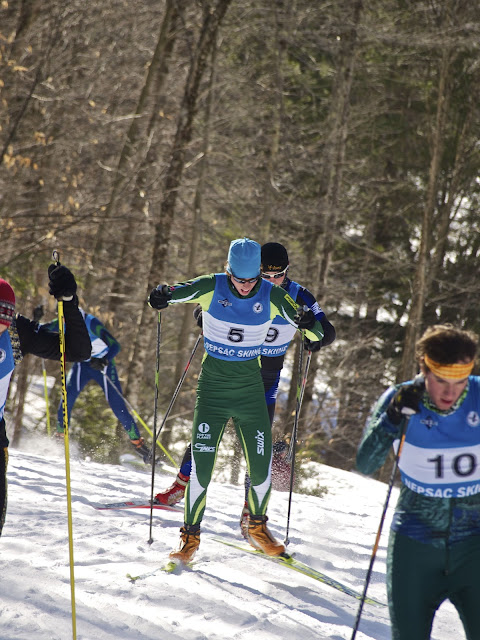 Dev skied a great skate race, with increased pacing throughout and finished fourth.  The boys ended the day as the 2nd (Hans) and 6th (Dev) qualifiers.  Our two younger visitor skiers learned a lot out there today battling with the high school racers, having solid efforts and focussing on technique throughout each 3km. 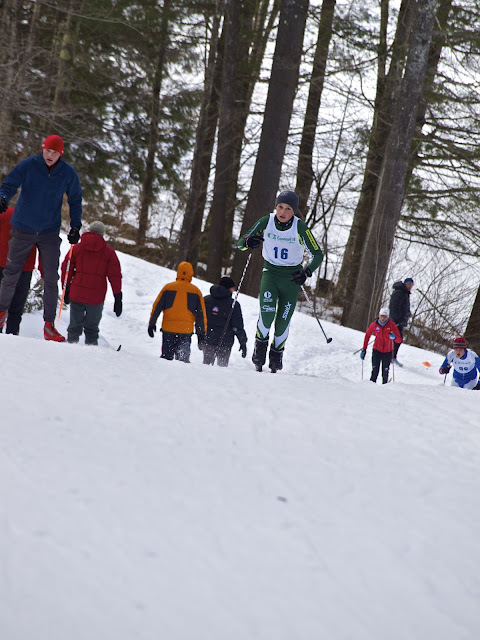 Noah skis the big hill on the classic leg. 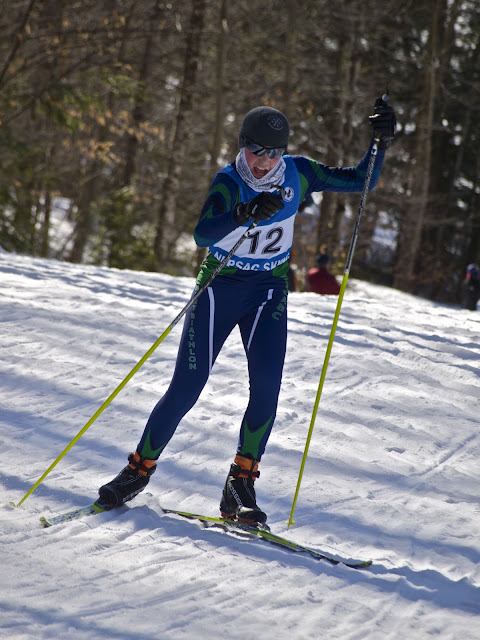 Parker gutting it out in the skate. 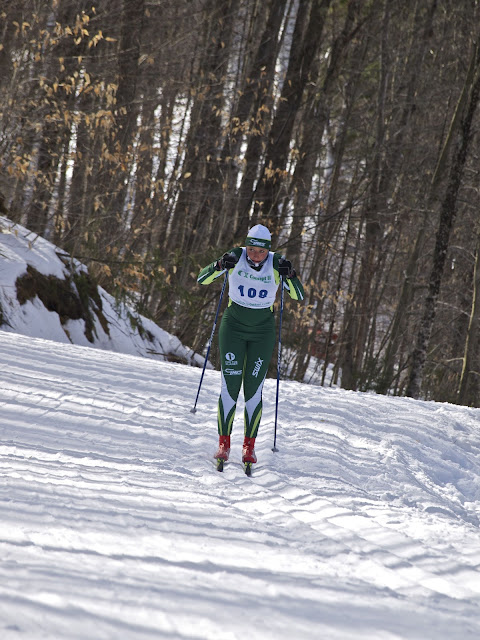 Kaitlin was a little off in her classic race, but recovered really well in the afternoon to put down a very respectable skate race. 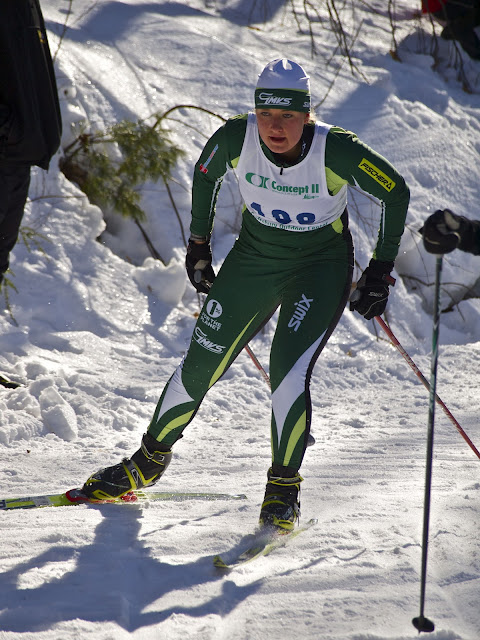 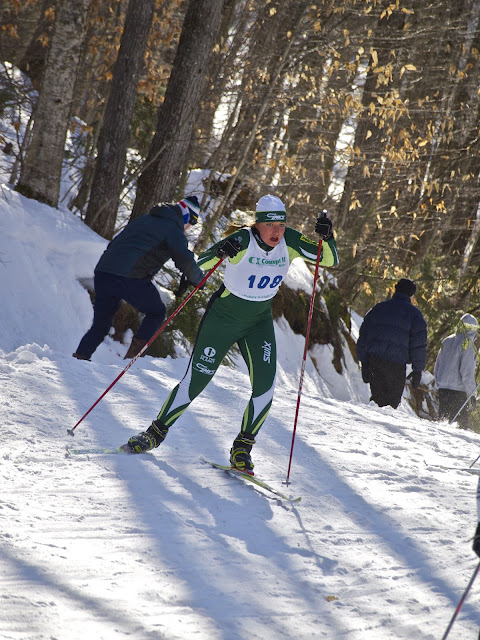 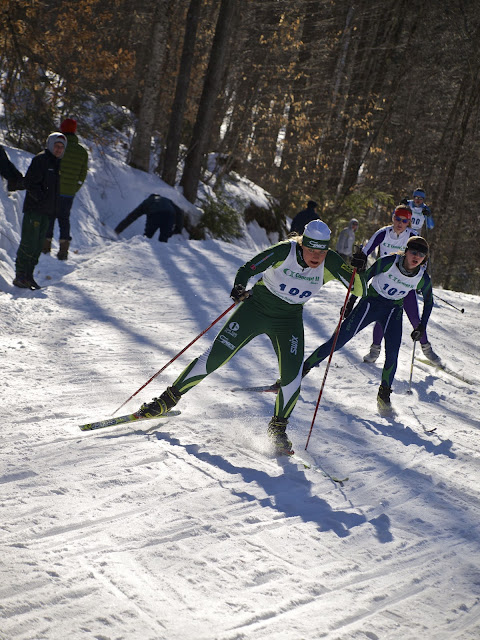 In another gutsy skate performance she skied to 8th place for the overall girls.  We continue to work on having more even efforts and know she has the guts to put together a great race.

It’s fun to travel out of our region and see what kids in the rest of the state have been skiing on.  The hills of Southern, Vermont are beautiful and the surface of the snow is even a touch firmer than what we have up north.  Thanks to Alexi and the Vermont Academy for a great event. The rest of the pictures are below! 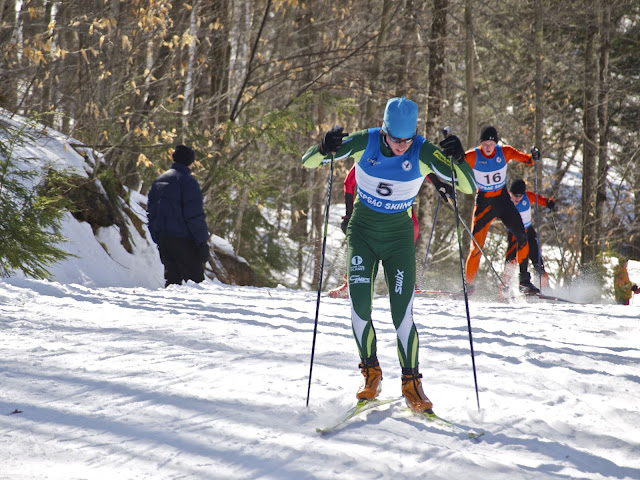 Dev V2s over the top of the big hill. 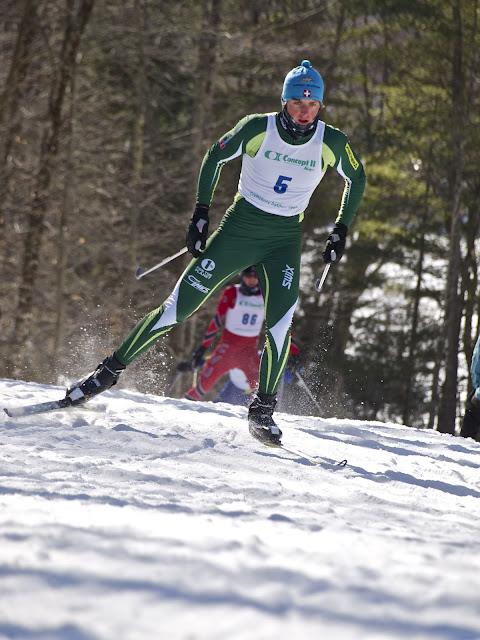 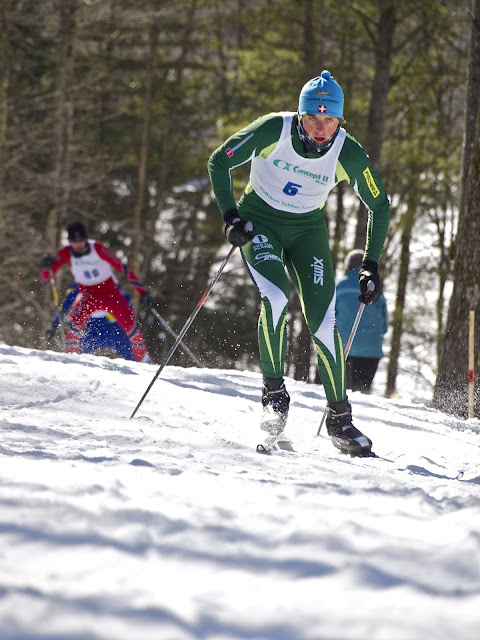 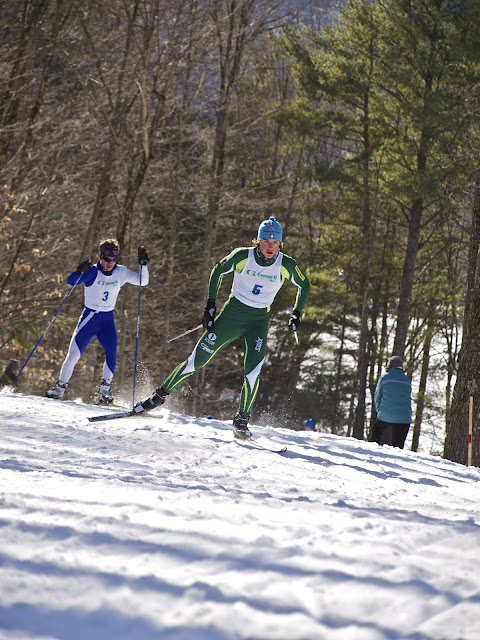 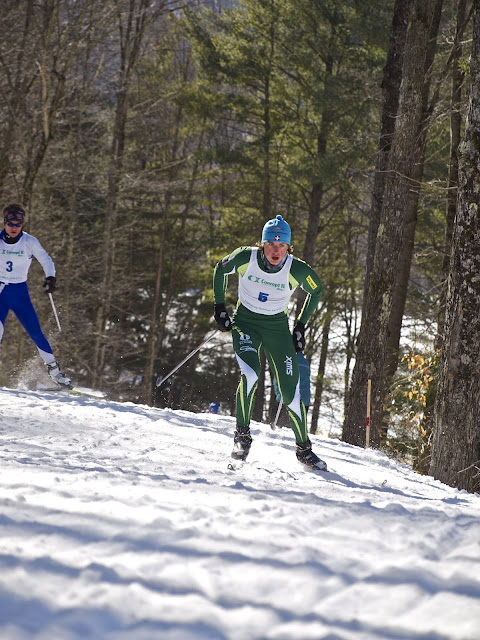 A lot of pictures of the big fellow. 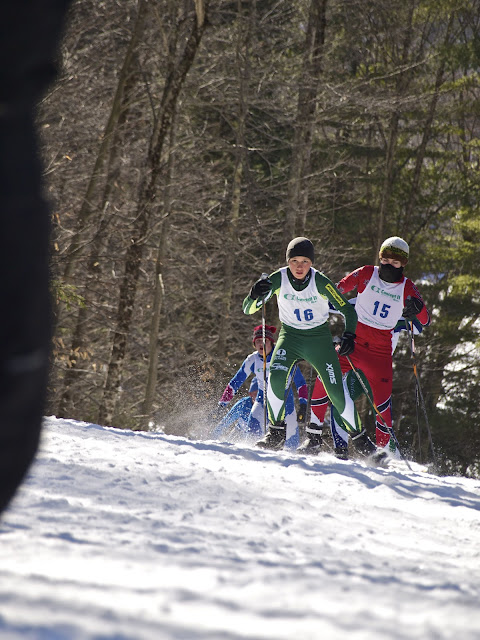 Noah leads a pack of skiers, having passed bib 15 from 15 seconds down. 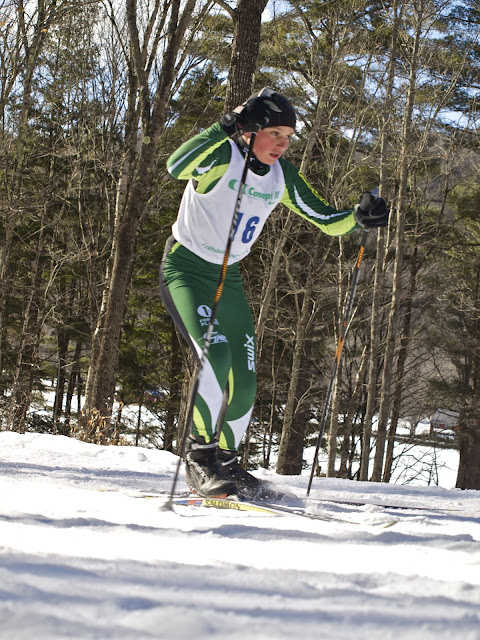 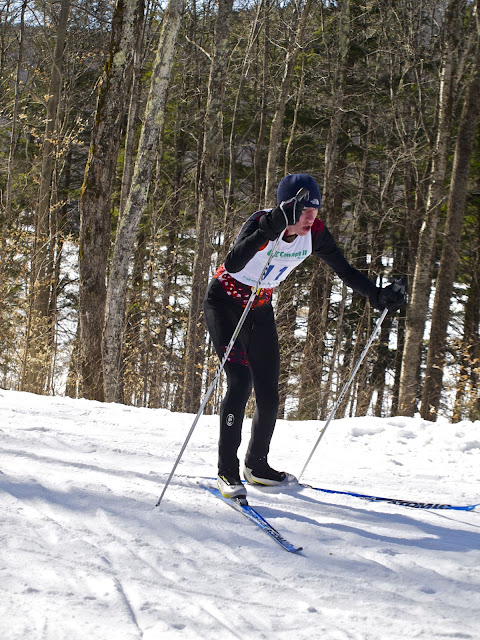 Tim and Andrea’s son Tim was out on the trails on Sunday!

Today we are resting up and getting ready for a big race weekend in Craftsbury.  Heidi Halvorsen is off to Albu, Estonia with the US Scandinavian Team today — we are stoked for her!