Lenny ValjasFebruary 14, 2012
After the Milano World Cup it was time to head up north to race the Otepää World Cup races in Estonia. Luckily a big snow storm was dumping lots of fresh snow on the race trails. Winter hadn’t arrived yet to  Estonia, so this storm brought enough snow to finally groom all the race trails, including the huge ski jump hill on the 15km course.  Our hotel this year was amazing. It was a brand new place serving us really great food. Every morning we would wake up to homemade juice and jams. We were about a kilometre away from the race site, perfect for a warmup jog before racing.
The first race was a classic sprint, only the second one of the year so far. I was excited to finally get to stride up hills…  The day before the sprint there was a lot of talk about possibly double poling the classic sprint on skate skis. There was only one way to find out which technique was faster. We decided to do two fast laps of the course, one with skate skis and one with classic. The result was actually really shocking. The double pole lap was significantly faster than the striding one, by 7 seconds! SO the choice was easy, we all had to try double poling. 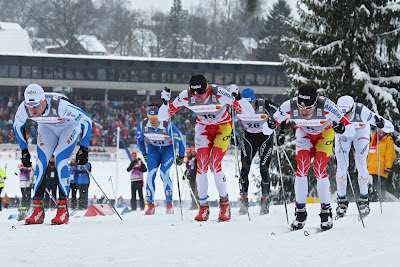 I qualified without any problems, but I could definitely feel that my arms did not feel very fresh anymore. I had our therapists try and massage them and flush them out before the heats. In the Quarter-final, I skied exactly how I wanted to. I stayed near the front of the group and made a move to the front going up the big hill. Alex and I came into the final 200 meters in 1st and 2nd  place. I thought I had this in the bag… about 50 meters later my arms completely gave out. My triceps were in spasm and I felt like I lost all control of them. I ended up getting passed by 4 guys and finishing in 5th in the heat. My arms were toast after that race, even if I made it through to the semi-final I would have had to put classic skis on. I just didn’t have the arm endurance for the last 200 meters. Now I know what I can improve on for future double pole races. Congrats to Alex for his 4th place finish. Really impressive man.
The next day I decided to try my luck in the 15 km distance race. Estonia’s distance course is by far the toughest I have ever skied. My arms were still sore from the day before, so I made sure my classic skis had enough grip to climb those huge hills. During the race I had no idea what place I was in. I didn’t receive any splits from the coaches during the race. I honestly thought I was going to finish in around 50th place. When I finally saw the results, I found out that I just missed the top 30 by only 1 second. So it ended up being my best World Cup distance race of my life, but missing the top 30 stung a little bit. Many thanks to our wax techs, on both days, my skis were fantastic! The highlight of the weekend was definitely Devon’s race. I could hear splits during my race that he was leading. He skied like an animal to a 3rd place finish less than a second from the silver! Kersh, You da man! 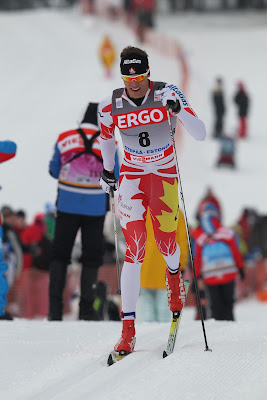 Estonian fans are super supportive of cross country skiers. It didn’t matter what country you skied for, they would cheer for you along the race course. Cross country skiing is their national sport and to have all the WC racers in their backyard is very special for them. Before the races, I was asked to do a couple of interviews for Estonian TV (in estonian) and so many people I spoke with afterward, were surprised that I could still speak the language I learned as a child. They embraced me as one of their own. I’ll never forget my 3rd and final climb up massive Tehvandi Hill; the whole way up the crowd was chanting “Lenny, Lenny, Lenny”. It was actually quite emotional for me and gave me a huge boost.
Next up, the city sprints in Moscow.