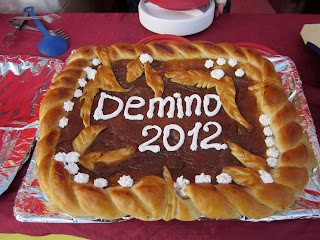 I know my blog has been quiet lately and I apologize for that. However, life has been quiet and simple, and dare I say, a bit boring. It’s tough to train so hard all year, only to watch races from the “sidelines” although I wasn’t even on the sidelines…. more like stalking my teammates on the computer!  But, that period of rehab is over, my wrist is feeling more or less better, and I am finally back on the road – this time, to RUSSIA! 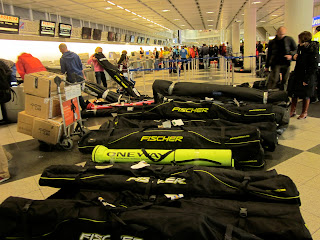 The crazy scene at the Munich airport with 1/2 of the World Cup field checking in for the charter flight
So far, Russia has been all that I envisioned and perhaps a little bit more. We were commenting on how we’d like to break through some of the Russian stereotypes but it’s tough when the second you step off the plane you see women clad in fur & leather and stern military men, 1/2 in Arctic cammo and other half with their arms crossed wearing hats like you would see in the movies….
We had a slow, yet somewhat uneventful travel to get here. We took two days from Ramsau, opting to train in the morning, then drive to Munich and crash out at an airport hotel before jumping on the FIS charter from Munich to Yaroslav. I was certainly a bit nervous about the flight seeing that the main thing I’ve heard about is the hockey team that died two years ago at this same military base (airport) when their plane went colliding off the end of the runway.  Maybe it was the story or maybe it was my nerves but the landing certainly made my heart skip a couple of beats. We hit the ground at a really, really high speed and it seemed to take forever to slow down. I probably created the fish-tailing in my imagination but it was easy to do once we slowed enough to see that the entire runway was glare ice. 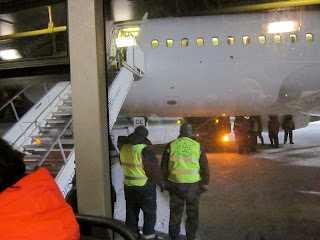 Our “un-marked” flight into the Russian Military Base
Once we departed the airplane there was certainly no “Alaska Airlines 20-minute baggage guarantee” (which is SO SO awesome.) Instead, they unloaded each bag, one by one, painfully slow and I swear, saw how long it could take to get us on the road.  It seems that wherever we go and whatever we do, they are at least 5x the people needed for any one task. One person kind of works and the others all manage to appear “busy.”  Every part of the journey took at least 5x as long as it needed too. At the end, I wasn’t impatient, I was just sincerely fascinated by the different pace of life, and Russian life in general. 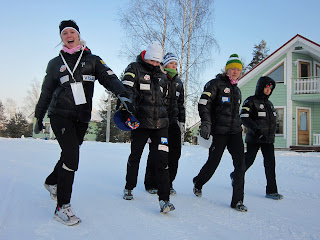 Our own Entourage on the way to breakfast…. fully suited up!
The first distance race is this afternoon with another 3:45pm start for the ladies. After the Tour, these late afternoon starts are getting much easier although I must admit, I still don’t like them. The temperature appears to be JUST legal at -19.8c the last time I checked.  Here are a couple of pictures in the meantime – I’ll have more to report once the races actually happen. It’s been almost a month since my last start and some people have warned me that it might take a couple of races to “get back up to speed.”  I hope that’s not the case but I guess we’ll know in a couple of hours! 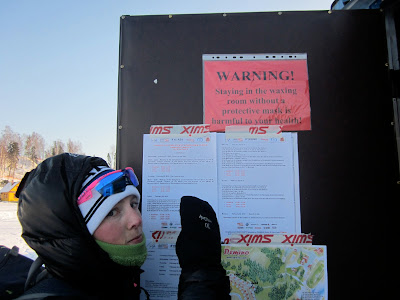 Check out the warning sign – heaters are good …. sometimes…. 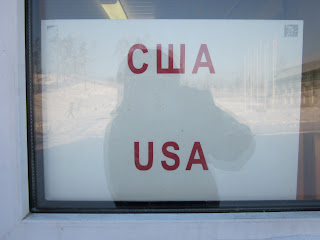 Our wax cabin labeled with USA in Russian… 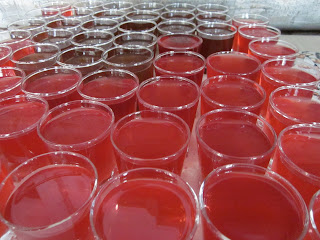 Thirsty? Take one of these pre-poured refreshing drinks at a meal. Koolaid maybe? 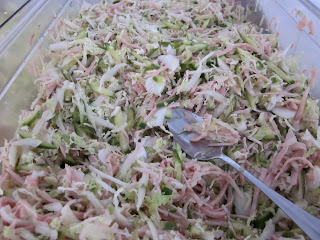 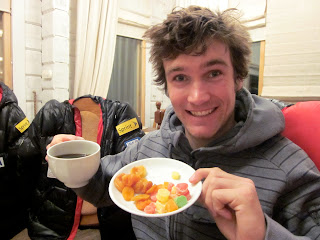 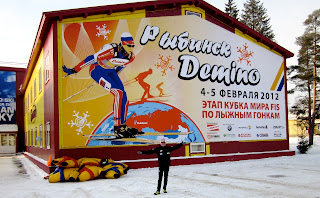 Thats me in front of a sign advertising the races…. to my right, (lookers left) are summo suits waiting to be set up for the races. 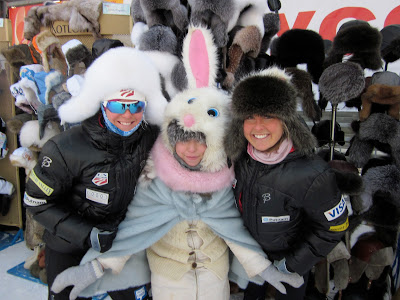 Sadie and I checked out the Russian fur hat stand this morning and this bunny rabbit insisted on getting in the photo with us. Usually I pity people in mascot uniforms but on a day like this in Russia, it might be the warmest thing going! 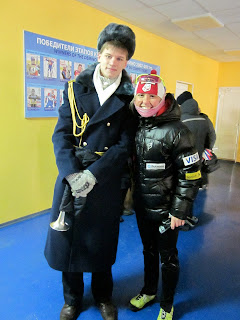 Getting in a shot with the locals! 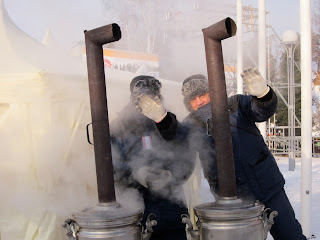 Not sure if there is tea in these or if its just a fire place…..
Until next time, enjoy some pictures of Russia!
Ciao & thanks for reading,
Holly
ps. Dear Facebook: No, I would not like to add my name in Russian to my profile, thanks 🙂