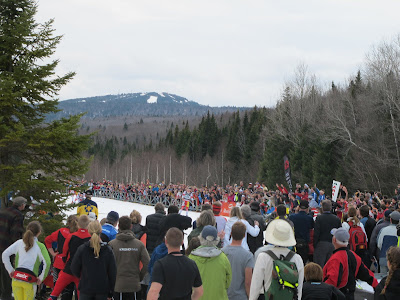 It was another warm day and there were large crowds for the mens and womens open sprint races today. Alex Harvey is a hero in Quebec and with the whole Canadian team racing along with top skiers from the US, Norway (including last years WJC winner), France (including WC podium racers), it was quite an exciting day. Alex did not disappoint as he won both the prelim and the final.

The temps only dropped to 50 last night, but they salted the course and that helped it stay very firm for the prelims and quite firm for the heats.
Our day started well. Skyler blistered out of the start and even though he faded a bit at the end, he had an excellent race and placed 15th.
Nick took a tumble (never a good idea in a sprint race), but skied well and Corky and Charlie just missed making the OJ heats. They skied hard and had fun..they wished they could race it again… having faster snow made the skiing more enjoyable 🙂
On the womens side, we did not have any current students, but alums Sophie C and Megan K (both Dartmoth) had great days. Sophie qualified 2nd (ahead of several World Cup regulars) and Megan qualified 19th! 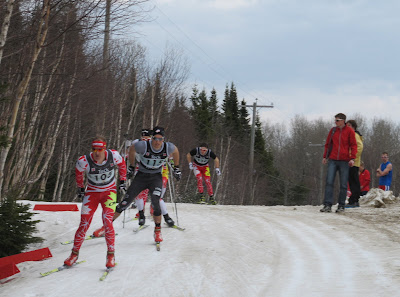 Skyler got to race the 1/4’s with a bunch of Canadian national Team skiers! Here he is about 40% of the way through skiing in 2nd :). He held on really well until the final downhill where his fatigued legs abandoned him and he fell…. still… it was a great effort and experience! 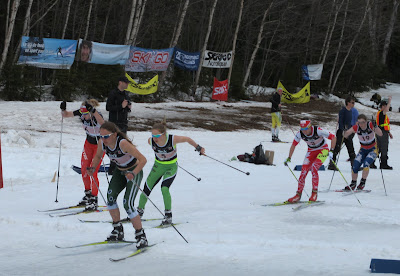 Sophie, Ida and Jenny B leading their semi final half way through. 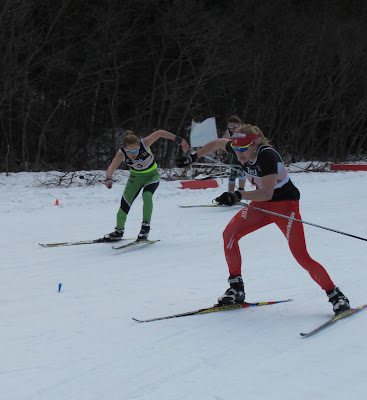 And at the finish. 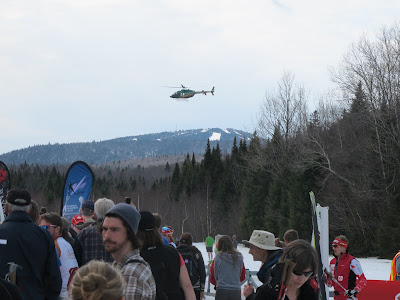 That thing in the air was here to film the race for the news. 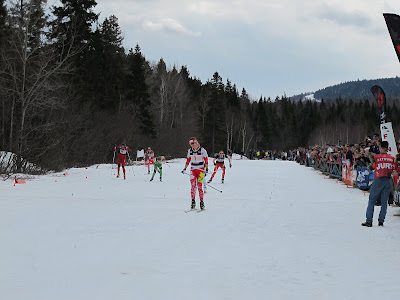 Chandra won the A final handily, with Jenny and Ida placing 3rd and 4th :).
All in all it was another great day for racing and spectating. Thanks to Mte Ste Anne for doing such a good job with holding the races in the summer-like conditions.
1/2 of our group is on the way home and the rest of us are getting ready to end the season at Craftsbury. Should be fun!