Last week I was in Mont Ste Anne, Quebec for some races at Canadian National Championships. I primarily wanted to focus on the skate sprint as I knew the Canadian National Team guys would be home from Europe and their recent successes and corresponding points profiles would make for a competitive and fun event. I’ve been fortunate through this Eastern racing series to have been taken under the wing of Maine Winter Sports Club coach Will Sweetser, who has been providing amazing ski service and will continue to work with me through Spring Series.

But to the sprint. The course, which for the entire week had been slush and mush, was generously salted the night before the race and firmed up really nicely. The qualifier had some icy sections and some wavy sections but mostly was firm and fast, just my type of skiing. I had really fast skis thanks to Will’s superb waxing and an Ultratune M1d grind, and qualified 11th, about 5.5 seconds out of 1st (Harvey) and right in the mix with some strong World Cup skiers. 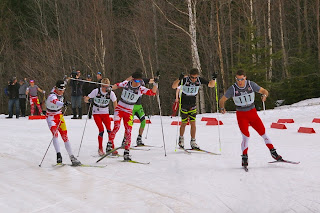 My quarterfinal was quite a doozy. It consisted of, amongst others, Harvey and Roddy Darragon, a veteran French World Cup skier. The start area was quite small and only had three lanes, so the first three guys picked the front and the last three had to stand behind in a second row. Being third ranked in my heat I picked a lane up front. Out of the start I double poled hard and seemed to get a little ground over Harvey and Nish, who both then apparently tangled up and I think Harvey broke a pole. I suddenly was in the lead by about 5m and found myself leading the charge. I tend to not like leading in sprints as it leaves one prone to attack and being overwhelmed in the latter half of the race, but with the circumstances such as they were I put the accelerator down and went for it. I led over the first big climb, down a hill, over another, and into the stadium. There was a lot of commotion going on behind me and I could hear poles breaking and see coaches running from the sides to offer replacements. Occasionally my baskets would get stepped on so I knew all the racers behind me were jockeying hard. 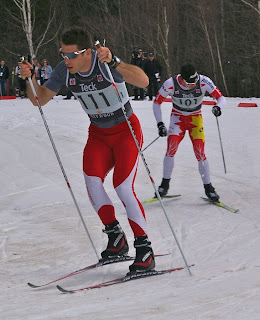 At the far end of the stadium Harvey made his move and shot strong forward beside me. At that point I hadn’t realized Darragon was so close, until he slipped right in behind Harvey, and ahead of me. As we turned into a short, steep pitch Nish and I were side-by-side and at the top he got the inside corner and pulled in front. At that point we were on a narrow lane and I skied hard to maintain contact. Coming down a short bender and into the finish stretch we all pulled hard for the line. I ended up about 2sec behind Harvey and a little less than 1sec behind the other two. Because lucky loser was determined by heat time (akin to the World Cup format), finishing fourth still gave me a chance at the semis. I waited until the end of the quarters to find out I just missed the cut, along with a few other Americans.

Needless to say, Canadian skiers are A BIG DEAL. Harvey, Kershaw and Valjas were mobbed by media, autograph-seekers and well-wishers everywhere they went. There was a low-flying film helicopter during all our heats taking video and tons of fans. It was quite a different feel than racing, even US Nationals, in the states. And the level of competition was certainly elevated; definitely a worthwhile experience, esp. given that they ended up being my best sprint points of the year.

Now I’m in Craftsbury, getting set for Super Tour Finals this week on a narrow ribbon of ice, dirt and rare snow bits. The organizers here are putting forth a superhuman effort to get these races going and I’m psyched to see so many athletes out enjoying preparation. When there’s racing fever in the air it really doesn’t matter what the conditions are; everyone will have fun and go like hell.