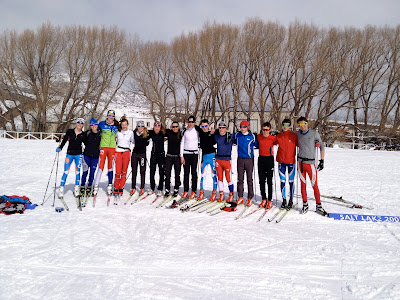 2012 J2 Team in the Soho Stadium
What a busy day!   The 9 of us were reunited with Tyler and Matt this morning who arrived late from DC and we started off the day with a quick morning jog and breakfast in the hotel.  After the coaches grabbed the vans, we piled in and headed up to Soho to check out the course.  It’s just about an hour drive up through the mountains – quite a scenic view of Utah!  We started out skiing under cloudy skies and somewhere between our first and second lap of the sprint course the clouds parted and we had sunny, blue skies for the rest of the day. We did 2 laps of the sprint course and a lap of the Olympic 5k – rave reviews all around!  Our J2s were pros at skiing the course nice and easy in L1.  We hit up a grocery store on the way to our hotel to stock up on snacks and Gatorade for the week and then checked into our hotel.  We’re at the Zermatt Resort, only 5-10 minutes from the venue.  Sprawling is a pretty accurate way to describe how spread out the resort is – it takes a good 6 or 7 minutes to walk from most of the coaches and athletes rooms to the conference room where meals are served!   It’s a very nice place though and I think everyone is quite comfy here. Tomorrow we’ll dial in the sprint course, test skis, and get a pre-race ski in.   Matt is the head coach for the JN team so he was running around all day doing everything: picking up late kids at the airport, running errands, attending coaches meetings, and keeping the rest of us organized.  Liz is a J2 age group coach, so most of the pictures here are of that group, but we’ll try to get some shots of everyone in the next few days. 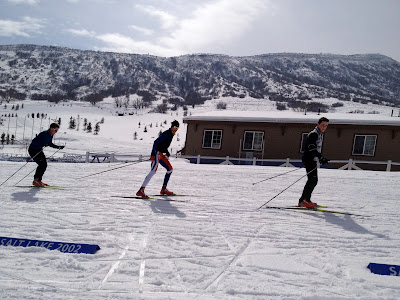 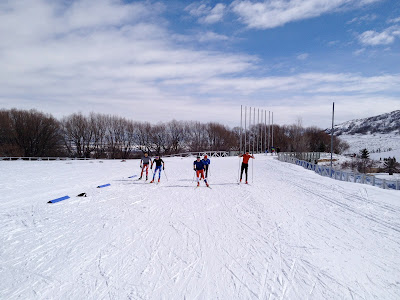 J2 boys coming through the stadium. 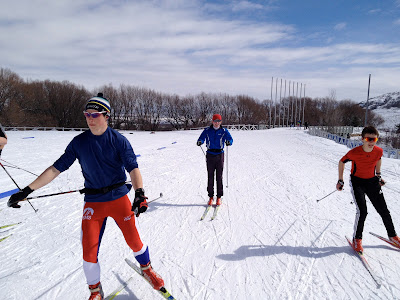 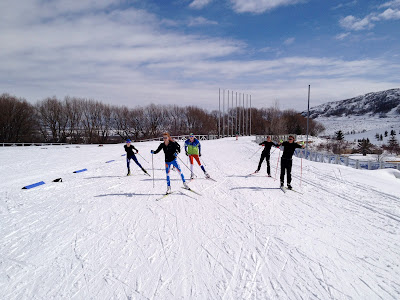 J2 girls head out for a lap of the sprint course! 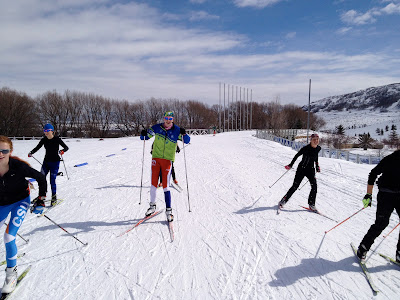 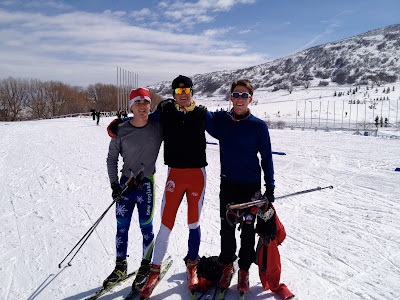 Eli Hoenig, Gino, & Paddy pause in the stadium for a quick picture. 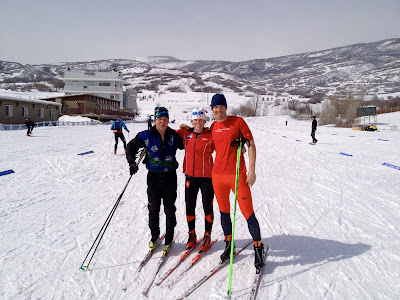 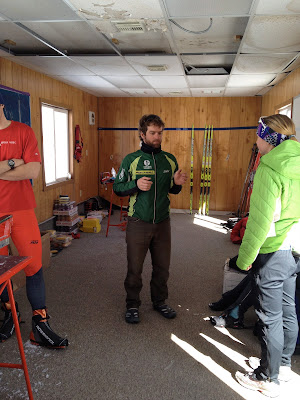 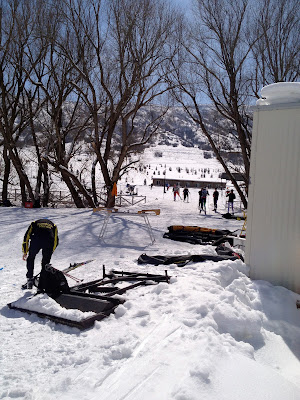 View from our wax cabins out to the stadium. 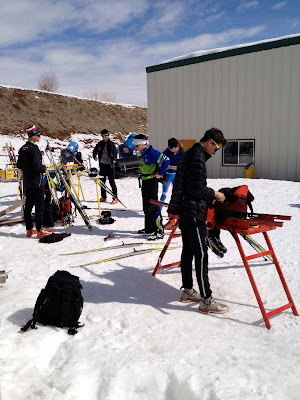 Athletes scrapped skis outside the wax cabins and hit the trails this morning. 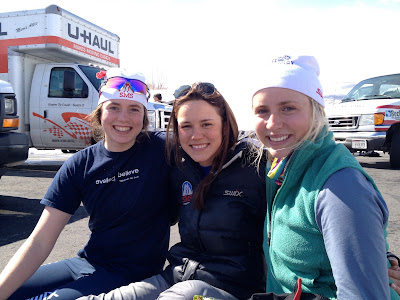 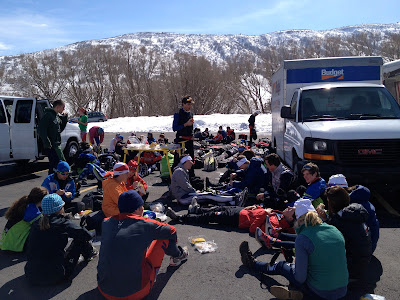 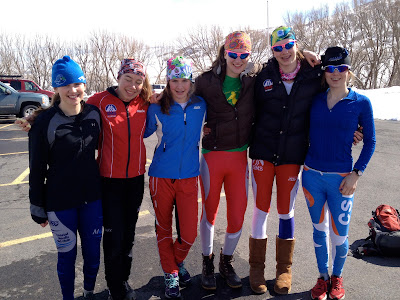 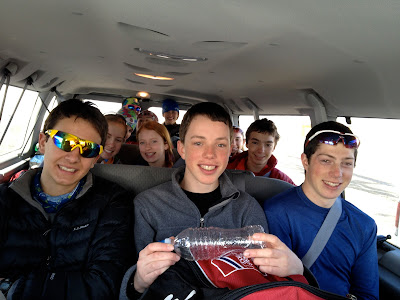 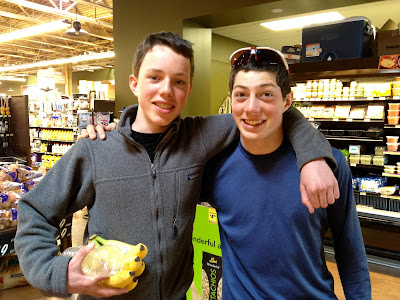 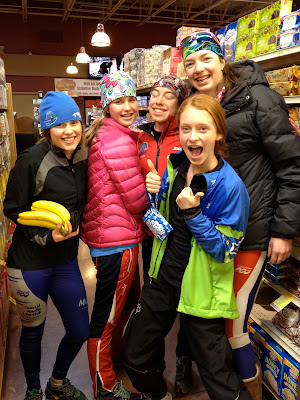 Nothing makes a J2 happier than a trip to the grocery store! 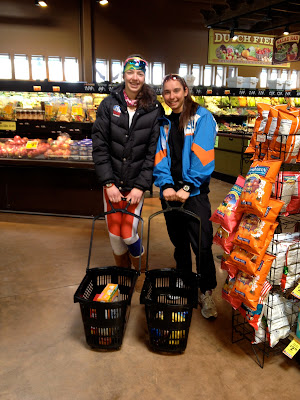 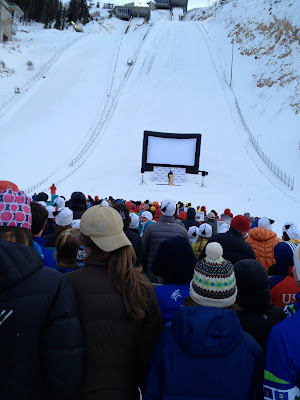 Tonight we had the opening ceremonies up at Utah Olympic Park.  Outside and chilly, but fortunately only 30 minutes! 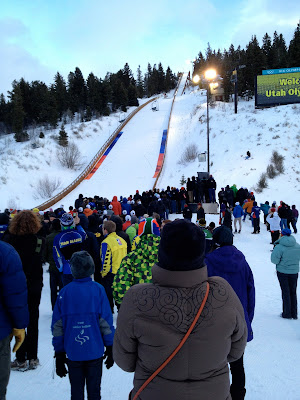 We watched a ski jumper hit one of the jumps to open the ceremony, right before the flame lighting.  We all hustled back to the vans after the ceremony was over, headed back to the hotel for dinner and a team meeting, and headed off to bed.  Stay tuned for more photos from tomorrow!

Ruhpolding through an Athlete’s Eyes