March 8, 2012
Today is Sverre’s birthday!  Sver often celebrates his birthday at Junior Nationals and we miss having him here, so all of us out in Utah, plus a few others, wanted to wish you a very happy birthday! 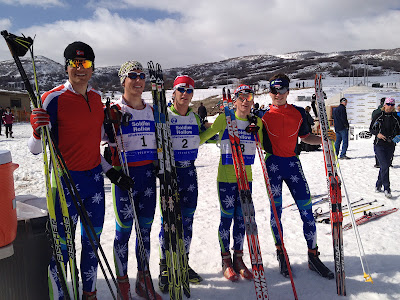 From left:  Gino (5), Paddy (1), Eli Hoenig (2), Fabian Stoeck (3), Sean Doherty (4).
New England and SMS skiers had a great day yesterday for the mass start freestyle races.  The day started out cloudy, but the sun shone through by the time racing got underway and the course went from hard and fast for the J2s to slightly soft for the J1s to ankle deep mush for the OJs.
The highlight of the day for team New England and SMS was watching Paddy and Gino and three NE teammates sweep 1 – 5 for the New England Team.  Paddy and Gino got a small gap during the first lap, but 3 NE skiers (Eli, Sean, Fabian) bridged the gap up to Gino and Paddy slowly pulled away for a 28 second win.  Gino ended up 5th overall, 2 seconds out of 4th.   All the NE boys kept a large pack of hard charging Rocky boys behind them – reaimpressive for a bunch of sea level kids racing at altitude. 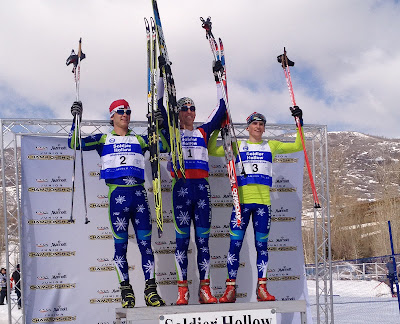 Eli, Paddy, and Fabian on the podium.  With Paddy’s win, this becomes the 16th year in a row, an SMS skier has won a gold medal at Junior Nationals.  Awesome!
Paddy and Gino were not the only ones with fantastic races yesterday.  Rachel Hall was on the podium with a bronze medal, with Issy right behind in 4th to lead the NE OJ girls in the 10k freestyle race.  Katharine Ogden finished 4th to get her second consecutive top 5 result at JNs. Brooke had an off day and finished 22nd – she’s looking forward to the classic races tomorrow!  Tyler, who just missed All American honors, and Hamish finished 12th and 26th respectively for J1 boys.  Koby finished 12th for J2 boys, Heather was 19th and Anika was 24th for J1 girls, and Austin Cobb was feeling sick yesterday morning so unfortunately he did not race.  We’re hoping he feels well enough to bounce back for tomorrow!  I know we had lots of parents out there taking pictures, so once we get those rounded up we’ll put them up on the blog. 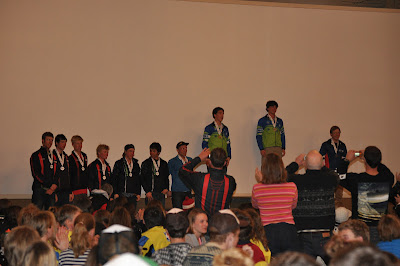 Last night was the mid-week awards and athlete ice cream social.  The top 10 in each age group receive All American honors and get called up to receive medals and stand on the podium.  In a few cases an international guest skier finished inside the top 10 so the podium would include the top 11 or 12 to represent the top 10 American athletes competing.   Out of 12 podiums that were recognized at the awards, one or more SMS skiers were on 9 of them (including all sprint podiums for all age groups) to tally up 12 All American honors for SMS!  Pretty awesome! 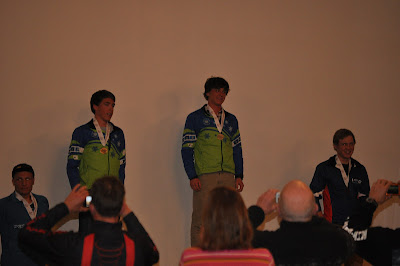 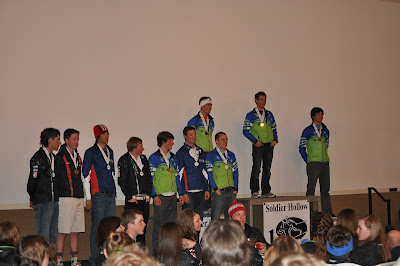 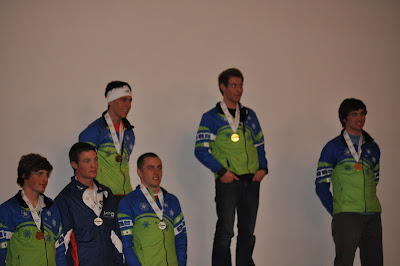 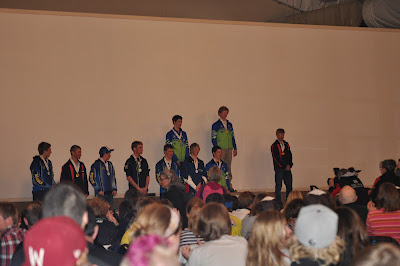 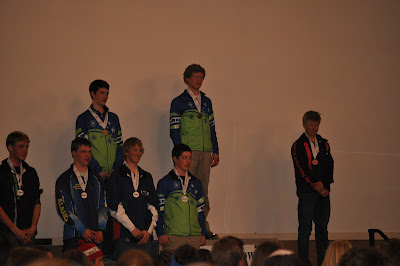 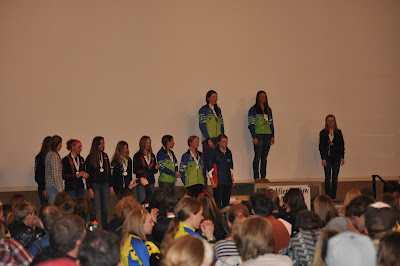 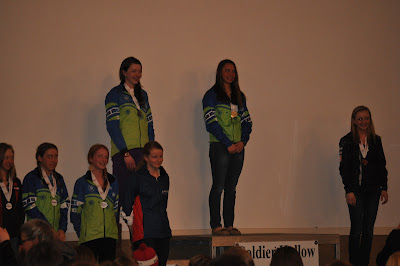 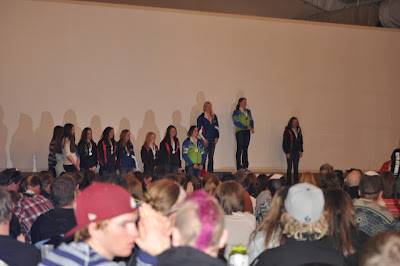 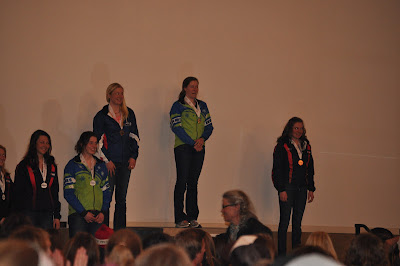 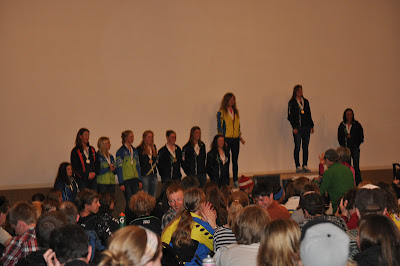 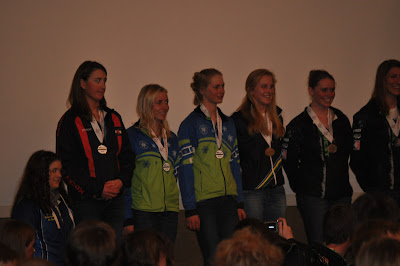 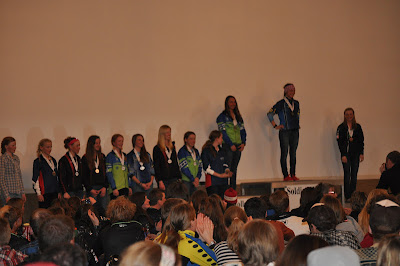 J2 girls freestyle mass start: Katharine 4th (girl to Katharine’s left is an international skier who finished below her). 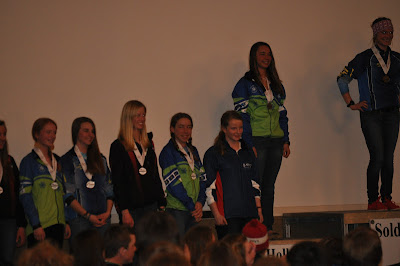 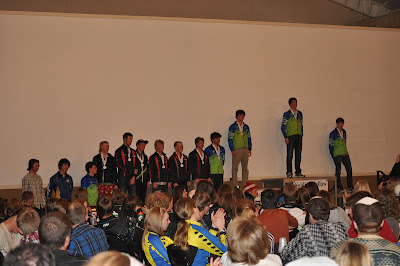 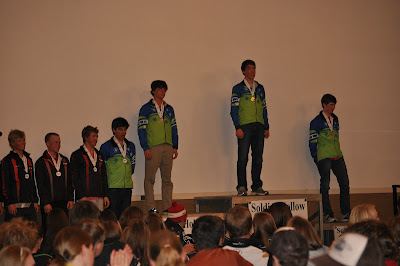 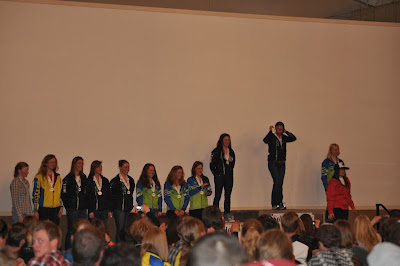 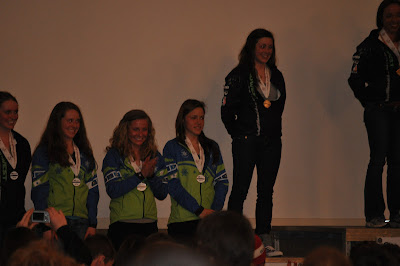 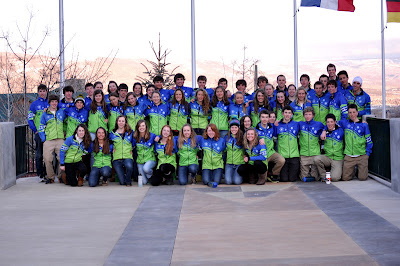 Team New England athletes (above) and coaches (minus wax techs, below) before the mid-week awards last night. 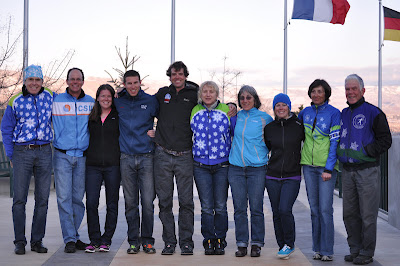 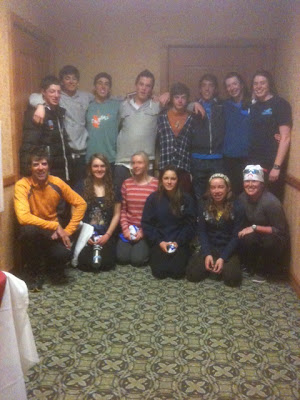