Earlier this week I tweeted a little nugget I stumbled across: that Jessie Diggins now owns around half of all top 30 results for US skiers 21 years old or younger over the past two decades. In contrast, the most any single Norwegian contributes over the same time period is around 10% of all their top 30 results by skiers 21 or younger.

That fact illustrates two things to me: (1) Jessie Diggins may be the best talent the US has seen since in a long, long time, and (2) the US is really quite bad at developing skiers at younger ages. Usually, our best skiers are well into their late twenties or even thirties.

Among young World Cup skiers, how does Diggins stack up? Well, of her 16 starts, she was in the points over half the time. This is well behind the likes of Krista Lahteenmaki, Maiken Caspersen Falla and Heidi Weng. But it was better than Finn Hagen Krogh, Gleb Retivyhk, Petr Sedov and Hanna Kolb.

This all got me wondering what the age breakdown has been more generally for top thirty finishers, so I made this following graph: 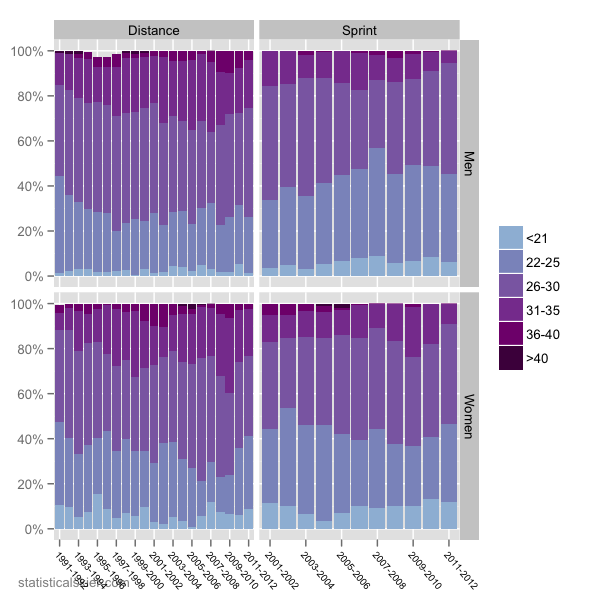 (The handful of bars that don’t reach all the way to 100% are due to a small number of skiers, mostly Russian, from the 90′s who I don’t have a year of birth for.) Not surprisingly, the under-21 crowd is more strongly represented among the top sprinters.