Holly BrooksMarch 9, 2012
There is certainly an art to traveling and traveling well.  There are tricks to traveling in a big group such as the US Ski Team, and there are tricks to traveling by yourself. Both have their advantages as well as their challenges.  With the USST coaches are there for support and almost always, they take care of every logistical detail. If you wish, you can simply act as a herd animal following others around you.  This doesn’t mean it’s easy and that doesn’t mean it’s not tiring. 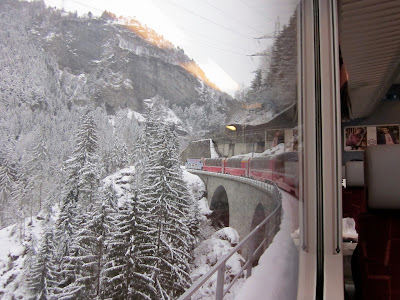 View out the train window headed towards St. Moritz from Zurich
In comparison, traveling by yourself allows you to be on your own “watch” but it also means that its your personal responsibility to get from point A, to point B. If you don’t, you might not get your next meal or find a bed for the night!
Take this past weekend for example. It was a test in spontaneity, last minute decisions, and faith that everything would work out!  Less than a week ago I flew from the states into Helsinki, Finland to compete in the Lahti (Finland) World Cups.  If I skied well, I would be invited to continue onto Norway and if I skied REALLY well, there was a small chance that I would keep racing through World Cup finals in Sweden.
Well, I simply didn’t ski well in Finland. Blame it on the travel, the 50k a week prior, or just simply “not going fast enough” the options of racing in Norway and Sweden were gone.  Going into this period, I knew it was an option and had come up with plan A, B & C in theory (and theory only)! 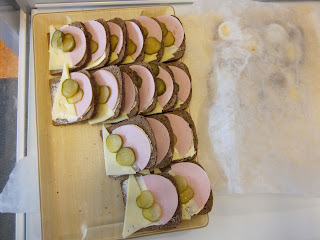 Leaving the Finnish sandwhiches of Lahti…
I have recently decided that buying plane/train tickets and making reservations well in advance only costs money (especially when you have to change and/or cancel plans) and I can only afford to “throw away so many tickets” that I don’t use. So, on Sunday after sprinting poorly, I pulled my laptop out at the venue, and later the hotel to buy my ticket out of Helsinki for the following morning.  (As you might imagine, I was nervous logging onto kayak.com, praying that tickets hadn’t tripled in price since the last time I had looked!)
The plan quickly and spontaneously came together: Share a shuttle to the airport with the French team, fly from Helsinki to Stockholm to Zurich. In Zurich I managed to meet up with my German Cousin Felix, whom I’ve met once, in 1995. I crashed on his couch for the night and he helped me navigate the bus and train station early the next morning on his way to work. (Thanks Felix!) 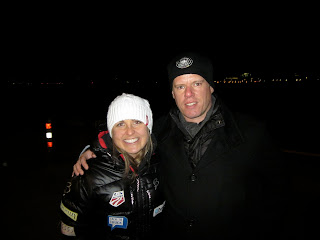 Me & Felix in Zurich
After leaving Felix I was left to schlep 190 lbs of gear by myself, from train to train and train station to hotel. I developed a strategy: move one bag 50 meters, go back for the other one, then move the next, keep all 190lbs in eye sight the whole time. As you can imagine, this is slow, tedious and a workout in and of itself. Sometimes strangers take pity on you and offer to help and other times, they’re just offended that your ski bags are in the way…..
When considering the hardship & expense of traveling while competing as an American in Europe, it is certainly easy to envy the Europeans.  They have so many options, so many races to choose from and home is never that far away.  If they are racing poorly, it is always an option to attend a “B level race” and then return to the World Cup when they are feeling up to it. Everything is “close” for them and they’ve grown up navigating the autobahn of Germany and the ski trails of Val di Fiemme. Heck, they’ve probably even sampled the waffles of Holmenkollen since they were 13!  Being a ski racer in Europe could mean the equivalent of chosing between a World Cup in Anchorage, a World Loppet in Fairbanks, and a high level OPA cup race in Soldotna; all within the span of one weekend!  The Washington Equivalent would be a World Cup at Snoqualmie/Kongsberger, a World Loppet in Leavenworth, or an OPA in Spokane.
With their knowledge, contacts, and know-how, it’s simply that easy. This past weekend while the World Cup was in Lahti, a couple of the top World Cup skiers opted to race the Swedish Vasaloppet instead. Vibeke Skofterud, one of the top Norwegians won the race to the tune of $50,000 and a brand new Volvo for setting a new course record! This is not to say that winning is easy but it certainly pays off over here if you can manage it! 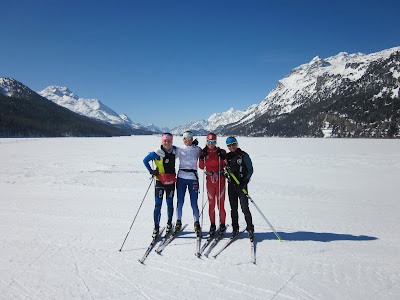 Some US girls in the Engadin Valley! Me, Nicole Deyong, Caitlin Gregg & Evelyn Dong
What’s next for me? Night sprints in St. Moritz tonight followed by racing the Engadin Ski Marathon on Sunday! We have a great group of Americans here to take on the challenge. After this, it’s onto Toblach, Italy for OPA finals before heading back to the US for a domestic finale @ Craftsbury.
That’s it for the 2011-2012 racing season!
H 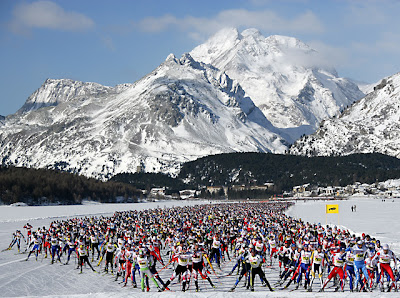 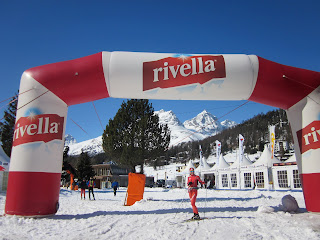 Caitlin standing under the Rivella blimp on the Engadin race course