I received an email recently from a reader who pointed out to me that Marit Bjørgen completed the 30k classic mass start in Oslo this season in 1:26:09.8, last year at World Championships Therese Johaug did the same course, mass start, skating in only 1:23:45.1, which is only a difference of about 2.8%. Surely, skating is more than 2.8% faster than classic?

Now, there are all sorts of reasons why unusual differences like this could occur. Strange weather and snow conditions, obviously, is the major culprit. My memory for those things isn’t so good, but my correspondent assured me that the classic conditions for Bjørgen were not favorable, which should have made the gap much larger, one would think. (I’m also assuming that the course really is identical, which is another factor that I have very limited knowledge of, being many thousands of miles away with limited TV coverage.)

As a first pass, let’s just look at the average speeds for the winner of all recent women’s 30k mass start races: 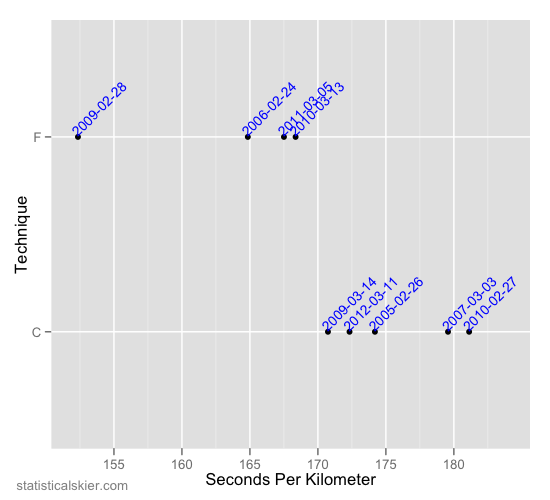 Now we can see that the average speed difference does appear to be quite large, but that my correspondent happened to stumble across a particular pair of races that weren’t that different. But clearly I can’t stop here.

Before going any further, let me be up front that there are numerous important variables that influence average skier speed that I can’t control for simply because I don’t have the data. Weather and snow conditions, as mentioned above, but also the fact that I collapse race distances down to their “advertised” distance. For instance, if the schedule says it’s a 15km course, that’s what I call it. The PDF race results will typically have a more accurate number, but pulling data out of PDFs is just more trouble than it’s worth.

With those caveats in mind, I went ahead a fit a big complicated model. Well, it’s not really that complicated, but I’ll spare you most of the details. Basically, it models average speed among the top 30 skiers as a function of gender, technique, race type (mass start vs interval start), race length and time (to account for changes in speed between, say the mid-90′s and now). There were a little over 16,000 observations in the data set used for this model.

Then we can look at the model’s estimates for the average speed of skiers in various types of races. First, the men: 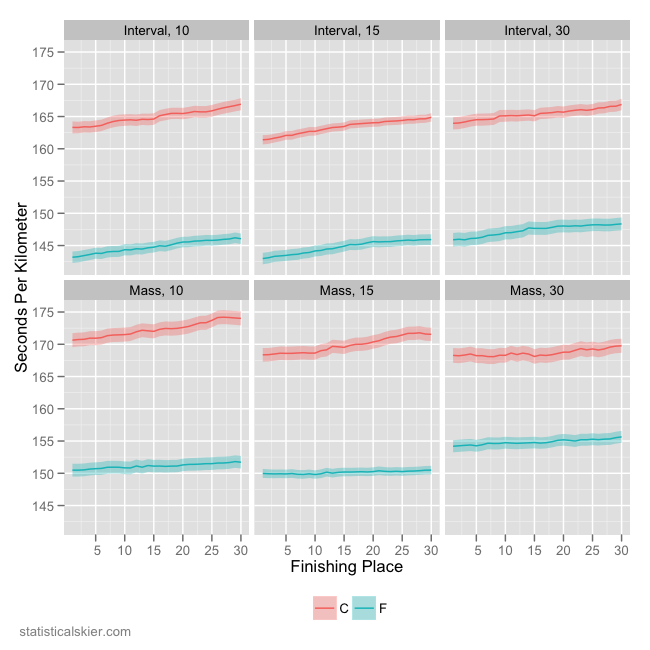 First, a minor statistical point. If we look at the 10km interval start panel (upper left), it suggests that the average speed of the winner is around 144 sec/km when skating and around 163 sec/km when classic. These are actually estimates of the average average speed. Confused? That’s ok.

What the model is estimating here is the average sec/km for men in 10km interval start races. This also means we shouldn’t be fooled by the apparently very narrow confidence bands. Those reflect our uncertainty in estimating the average, but in reality there will be races with actual speeds that vary greatly from these values.

Happily, our model says that freestyle skiing is considerably faster than classic. Yay for sanity checks! It’s hard to compare the interval and mass start races in this graph, but at the very least we can see that the mass start 30km events see a noticeably smaller gap in speeds. The other things I notice is that (unsurprisingly) the mass start events see a smaller difference in (average) speeds between 1st place and 30th place, but oddly skating seems more even in this regard than classic. (The freestyle lines seem flatter to me than the classic lines.)

The same graph, but for the women: 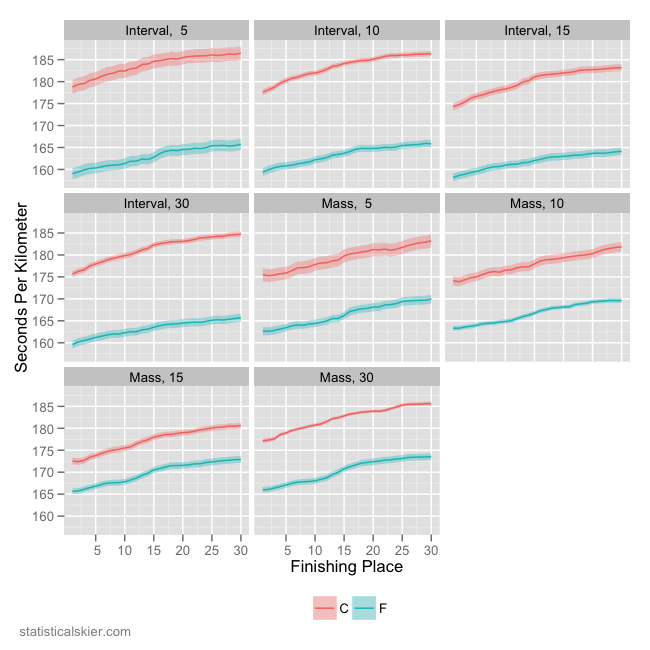 Some things remain the same. Freestyle is still considerably faster than classic. The difference in speeds between 1st and 30th seems more consistently large, compared to the men. Again, this fits with our general expectations that the men’s field is a bit deeper than the women’s. I also see a more obvious difference between the interval start and mass start events for the women: the gap between classic and skating seems smaller in mass start events for the women.

This last one doesn’t fit quite so well with my expectations. The conventional wisdom is that the women’s field doesn’t adopt quite so relaxed a pace in mass starts as the men, so I would have guessed that the women would have seen more similar gaps in speed between the mass start and interval races.

Let’s sum all this up with one last graph: 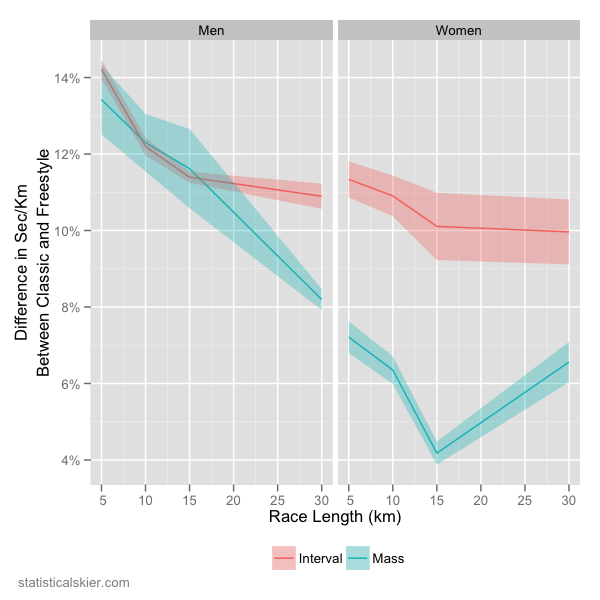 This would suggest that for the men, skating can be anywhere from 8-14% faster, while for the women skating is typically between 5-12% faster. The men generally see that technique gap decline as the race length increases, particularly so for mass start races. The women don’t really see such a pronounced difference with race length, but they do exhibit a much clearer gap between mass and interval start races, with the former being considerably slower, on average.

Of course, this all only pertains to distance races. I’ll have some similar analysis for sprinting (qualification rounds, at least) on Wednesday.