Like last time, we’re looking to quantify somehow the average difference in speed (in sec/km) between classic and skating. Only this time we’re focusing in on sprints. Organizing the times for the heats is a bit of a challenge, so I’m only going to consider the qualification round. So essentially we’re just looking at speed differences over much shorter distances.

Following the same general procedure to fit a model for the sprint races, we get the following results: 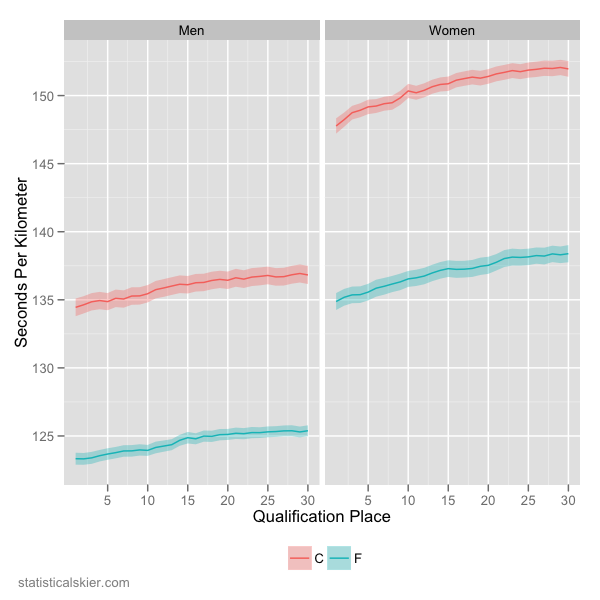 Again, happily, freestyle is faster than classic. Note that I’m not really considering the course length for sprints, so I’m essentially assuming that the differences between a 1km race and a 1.8km race aren’t going to be too meaningful. Recall from last time that the men saw a difference of between 8-14%, the women between 5-12% with the longer races tending to see a smaller difference between skating and classic, on average.

What’s interesting is that in this case we get a difference of around 8.4% for the men and 9.0% for the women. Given the differences we saw in 5-10km races on Monday we might have expected larger differences.

What I think is going on is that the speed advantage of skating is sort of non-linear in race length. For very, very short distances there isn’t enough time for skating’s efficiencies to have an effect. But when the races get really long, the increased efficiency in skating starts to be counteracted by physiological issues that will be more constant between techniques. So there may be a sort of sweet spot in between where skating makes a huge difference, but less so at the extreme race differences.

The strongest case for this I could make would be to consider truly absurd extremes. You’re not likely to see much difference between skating and classic in a 5 meter race. However, you also probably won’t see much of a difference in a 500km race. In the former, skating’s advantages never really get the chance to take effect, and in the latter the relative efficiencies of the two techniques probably may pale in comparison to the pacing demands of a race that long.

Toko: Get Ready for Next Year