I got an interesting question from a reader the other day that I though I’d follow up on:

So, this is harder to examine directly than it might seem, mostly due to the availability of data. FIS isn’t in the habit of publishing lists of Continental Cup leaders someplace that remains accessible for more than a year or so. (At least, not to my knowledge. If anyone knows of such a series of lists, I’d be happy to take a look.)

In particular, the starts awarded to the intermediate leaders during a season will be the hardest to track. Also, there’s the issue that sometimes the nominal Continental Cup leader may decline the starts, or be ineligible (wrong nation of origin) so you’d have to filter out those cases too.

To avoid getting lost in the technicalities of Continental Cups, let’s look at something that’s pretty close to the original question: take the top three skiers in each Continental Cup series at the end of a season, and look at how they did in the 1st period World Cup races the following season.

This will allow us to address the question of how the “best” Continental Cup skiers from different regions compare on the WC, without getting bogged down in too many details.

The following graph shows the median result for an aggregated collection of Continental Cup series: 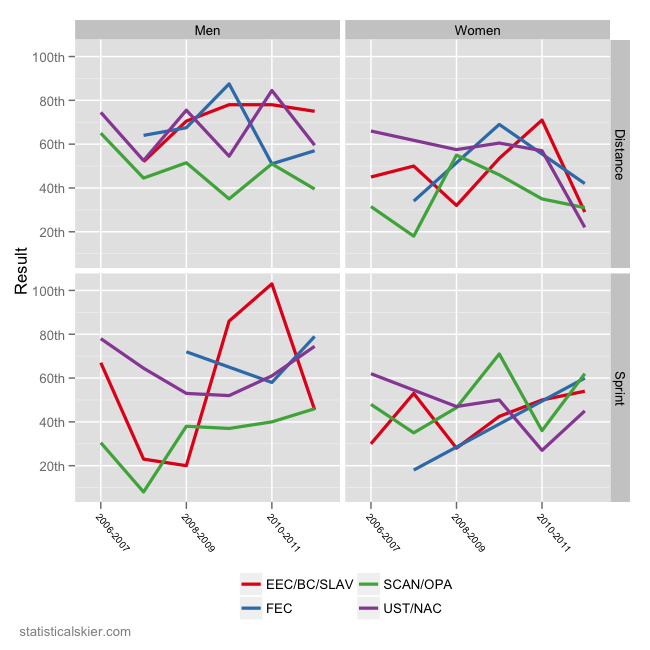 Even though I’ve expanded this to the top three, rather than just the winner, it’s important to note that these results will be very strongly influenced by a single very strong skier from a particular region (I’m thinking Justyna Kowalczyk here, but there are other examples).

But this also means that it’s tough to glean any general trend, since the results from any particular region will be so strongly dependent on whether they happen to have a “super star” that year or not.

That said, I do think it’s clear that the Scandinavian and OPA Cup skiers are generally stronger on the men’s side. The women’s field, not surprisingly, is a little more mixed. The recent good fortunes among the women’s UST/NAC skiers is probably in large part to Jessie Diggins/Holly Brooks.

Crust Loop in the City