Now we’ll finish up this series with the sprinters, starting with the most improved men. The methodology is simpler here, as we really only need to use finishing place as a metric (although we will still scale improvements so that, say, improving from 40th to 20th isn’t seen as a dramatically larger improvement than from 10th to 5th).

Here’s most improved men (click through for the full version): 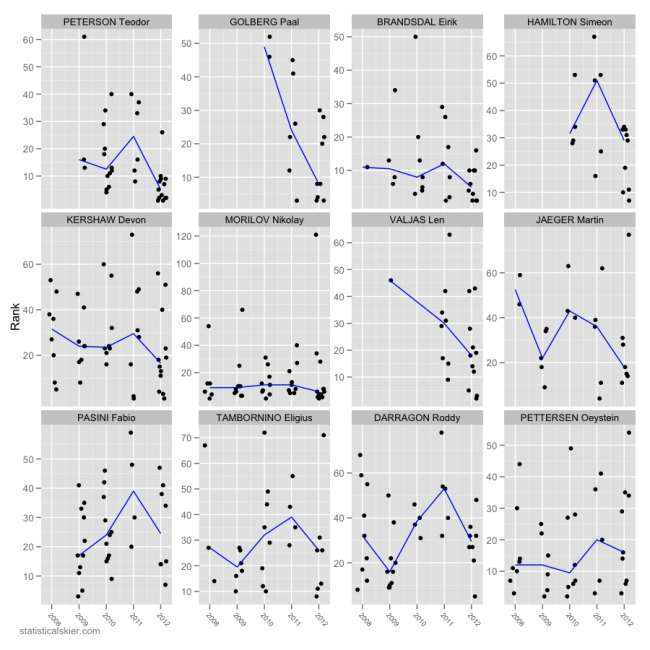 Sweden’s Teodor Peterson tops the list here (which is interesting, given what we’ll see for the most un-improved men’s sprinters…) followed by the Norwegians Golberg and Brandsdal. Golberg is still quite new to the circuit, so rapid improvement isn’t terribly surprising for a guy getting more starts.

My general impression is that its pretty hard to sustain dominant sprinting performances for very many seasons in a row (too much luck is involved) so I wouldn’t be shocked to see Peterson have another successful season next year, but maybe not so relentlessly advancing to the semifinals.

I’m glad that Simi Hamilton gets his due here, while perhaps overshadowed by other successful North American sprinters this year, he really did finally put together a solid season. Similarly, Devon Kershaw pretty dramatically stepped up his sprinting performance, which is a major reason why he finished 2nd in the World Cup overall.

Morilov’s improvement doesn’t look terribly impressive, at least to the eye, but he’s getting credit here for some increased consistency.

Len Valjas basically doubled the number of times he qualified for the heats this season. And that’s nothing to shake a stick at!

Roddy Darragon, Fabio Pasini and Eligius Tambornino (awesome name!) I’ll group together as they both saw some improvement after a handful of sub-par seasons. Pasini showed some flashes of his 2009 self, but wasn’t terribly consistent. Darragon has two pretty bad seasons with not many races (injury or illness perhaps?) and improved, but not quite to where he was in 2009.

Country Mouse in the Big City