Moving on from last time to the most improved in women’s distance events…you can read that post for an explanation of the metrics I’m using, and the usual round of caveats. 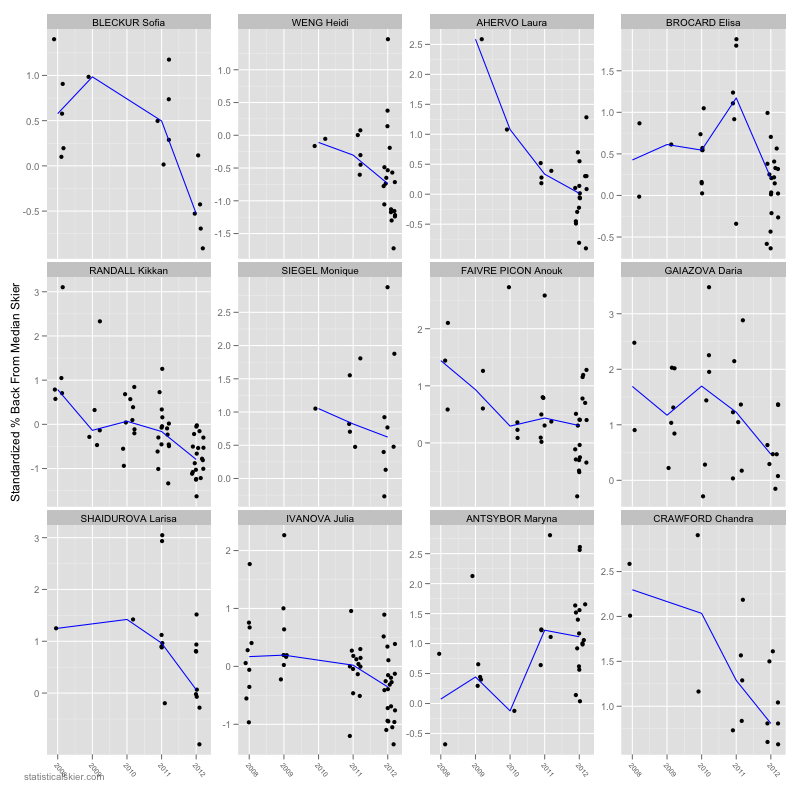 As before, you can click through for a slightly larger version.

By these measures, Sweden’s Sofia Bleckur comes out on top. She only did a handful of WC distance races this season, but they included a solid collection of top 30 results, which compared to her efforts last season was a dramatic improvement. Norway’s Heidi Weng, while clearly a future star, had many more starts and a much larger variance in her results. Her “middle of the road” results are all still a decent improvement from last year, and then she added to that a solid collection of outstanding races.

Finland’s Laura Ahervo looks fairly similar (by their graph at least) to Weng. Short history of WC racing with a sharp uptick in starts this year that included a sizable number of excellent results. Italy’s Elisa Brocard also had a very strong season, but she was definitely aided in this particular ranking by her decidedly sub-par results last year.

It shouldn’t be too surprising to see Kikkan Randall on this list, as her distance skiing generally took a big step this year. The big take-away I see from her graph is consistency; she just didn’t have any terrible distance races, which when you look over the other folks in this graph is pretty rare.

Both of the Canadian ladies, Daria Gaiazova and Chandra Crawford are clearly trending in the right direction, although in absolute terms they’re still much closer to be competitive in sprints, probably.

Both Anouk Faivre Picon and Julia Ivanova saw the bulk of their improvements come from an increase in the number of very strong results, rather than an overall improvement in their “average” race. Again, consistency can be a major issue.

Weekly Roundup: The End of the North American Season

A Weekend in Vermont