Almost done with the series now, just the sprinters who struggled the most this season, starting with the men: 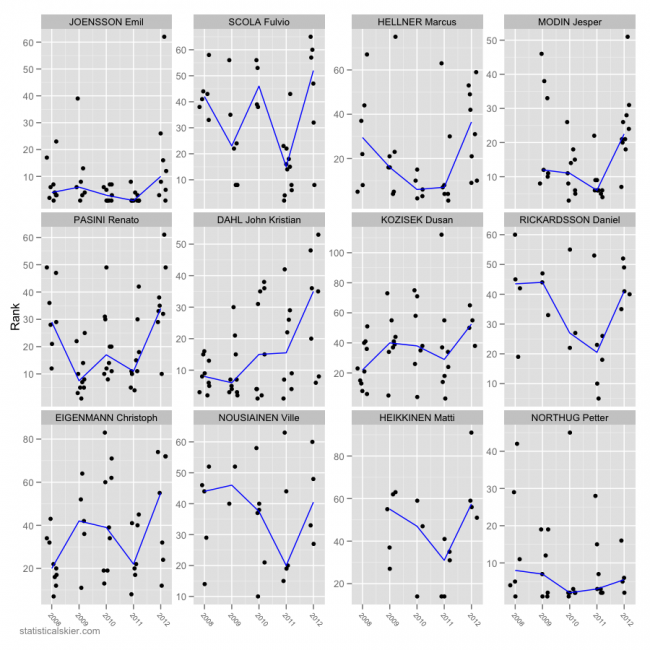 This list is notable for a few reasons, first because of the large number of big names on it. Usually there are at least of few people my metrics pick out that I don’t really know, but I’m familiar with basically all of these guys.

Secondly, this highlights what a rough season the Swedish men had, particularly in sprints. Joensson, Hellner, Modin and Rickardsson all struggled considerably this year compared to last. In Joensson’s case, he still had some decent races, but he simply wasn’t as absurdly dominant as he was the last two seasons. Hellner, Modin and Rickardsson all saw pretty dramatic declines, though. I mean, Rickardsson didn’t qualify for the heats once this year, Modin qualified but rarely advanced past the quarterfinals, and Hellner only qualified half the time.

Two Italians also make the list, Scola and Pasini. Scola’s sprinting performances last year are looking like they may have been a bit of an aberration, although his results have been pretty erratic from year to year. Pasini just plain struggled to qualify at all.

John Kristian Dahl has seen a steady decline (while still occasionally popping good races) for 4-5 seasons in a row now. But while he still manages to advance to the semis or finals a few times each season, his bad races are just getting worse and worse.

The Finns, Nousiainen and Heikkinen don’t do quite as many sprints each season as some of the specialists, so one might expect their results to be a bit more erratic. Northug’s inclusion here is probably somewhat marginal, stemming from his struggles with injury and illness that prevented him from doing more sprints. I sort of doubt that his actual sprinting abilities declined all that much.

Interview: After Four Olympic Appearances in Two Sports, Brazil's Mourão Hopes For One More - In Biathlon