Greetings from the far north. For the last couple days I’ve been kicking it in Fauske, Norway. The small city sits on the North Sea, right up next to the Arctic Circle. I never knew much at all about this place, except that it is the hometown of the Nystad brothers, Knut and Trond. I never heard them speak fondly of the place, so back in the day I called them “fauskefaen.” I guess I wasn’t too far off. My gently improving Norwegian added a new word to the repertoire. Fauske is the plural form of flauskr, or “old and rotten tree.”

Anyways, the oceanside racing here isn’t something I soon will forget. The weather and the rain turned the ski tracks into mashed potatoes, making for a pretty epic sprint relay. It’s been a little off racing this year for me, so I was representing my Trondheim club Strindheim IL on the second team. But I found some good racing legs, and on three of my 6 legs posted the fastest times of the day, which meant outskiing guys with last names like Northug, Gloersen, Claussen, Dyrhag and Company. On my final lap of the final I caught back up to the leaders with 400meters to go, then soon preceded to take about the hardest fall I’ve ever had on cross-country skis. Poles were broken, my suit was torn, I lost skin, but fortunately my surgically repaired shoulder held up. 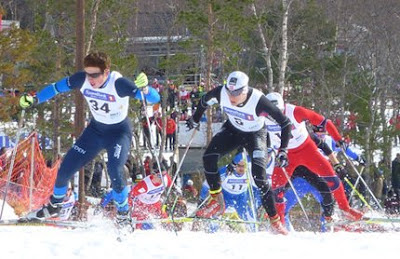 The next day was the 50km classic. I woke up late that morning with a sore shoulder but nothing more and to falling snowflakes and +4C on the temperature dial. My dreams of a fast, furious 50 kilometer were falling with the white precipitation. Making the race so interesting was the altitude. We started the race at sea level, then climbed for pretty much three kilometers straight to 250 meters. I’m sure the scenery was great, working through the weathered forest, above the treeline and beside some stunning lakes. There was even a brass band playing all day at the top of the course for the racers. But the snow this far north undergoes a drastic change as one goes from sea level to atop even a small mountain. The super wet snow turned dry at the top. I can’t almost think of a harder day for waxing. On the women’s side, something like 8 minutes separated the top 4 women over 30 kilometers! Something like 40 of the 120 men didn’t meet the finish line. Fortunately, I did. I had plenty of grip for the big climbs. Unfortunately, I wasn’t outgliding anyone, was getting worked over on the rolling double pole sections, and was getting plenty of pole pushes down the hills. After a while, though, I really had this feeling of how much fun it was to be a skiracer. I wish I had better words to describe it than this, but skiing at a steady rhythm, with coaches passing out bottles of isotonic drink every ten minutes or so (remember, it was hot! and so easy to get dehydrated out there), I remember being 37 kilometers in and I kept thinking several times over, “How cool is this.” It really made me appreciate the opportunity I had that day to compete. I felt proud to be wearing the blue and yellow of Strindheim. The first thing Petter Hagen did when he saw me was give a firm handshake and say, “Good job. You had fun out there today.” He knew exactly how I felt. I’ve had better races. There have been competitions where I’ve dug down deeper into the pain cave and came out on top because ot it. But I’ve had fewer good feelings after finishing a season than I had in Fauske. I’m keeping this feeling for a long time. 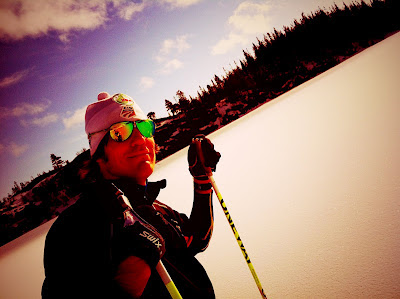 Now I’m back in Trondheim for about two weeks, building for next year before I take a short Euro city vacation with Bettina, then visit my grandparents in Sedona, Arizona. Phillip Furrer is back in Switzerland, but Erik Bakkejord is back in the game. The stoke is high. I can see such great heights in Val di Fiemme.